Larry P. v. Riles is considered to be one of the historical cases that have greatly influenced special education. The case was filed in 1971 by six African American children who were attending public schools in San Francisco and their complaint was that they were being placed in educable mentally retarded (EMR) classes in a discriminatory manner (Raffel, 1998). They argued that the IQ tests that were being used to determine their placement in the EMR classes were biased as they were developed based on a sample of white children (Raffel, 1998).

Don't use plagiarized sources. Get your custom essay on
“ Influence of Larry P v Riles on Special Education ”
Get custom paper
NEW! smart matching with writer

Following this, the black children were retested but this time black psychologists were the ones who tested them and the psychologists put into consideration the cultural background of the children (Raffel, 1998). The children passed the tests. Further, they argued that placement of undeserving children in EMR classes caused irreparable harm to the children as they did not benefit from the general curriculum and their argument was accepted by the court (Raffel, 1998). The ruling was made in 1975 where the federal court ruled that the standardized IQ tests were biased against the African American children.

The court ruled that the tests were biased in terms of race and that placement of students in special education programs (EMR classes) based on results of these tests was unjustified and discriminatory(Odom, Horner, & Snell, 2007). The court also put into consideration the argument on disproportionate representation of black students in EMR classes. At that time, the percentage of African American students in the San Francisco school district was 28.

The court banned use of the standardized IQ tests on African American children as the basis for placing the children in EMR classes unless permission was granted by the court (Odom, Horner, & Snell, 2007). It also ordered correction of the disproportionate representation. This case led to transformation of the special education in U. S. Following the ruling by the federal court, the congress enacted nondiscriminatory evaluation requirements in 1975 and since then these have formed an integral part of IDEA (Individuals with Disabilities Education Act) (Odom, Horner, & Snell, 2007).

The IDEA since then provides that both the local and state education agencies must employ evaluations that are nondiscriminatory when determining if students have disabilities (Odom, Horner, & Snell, 2007). If students are found to have disabilities, the IDEA provides that nondiscriminatory evaluation methods be employed in determination of the consequences of the findings on the student with regard to placement of the students in appropriate special programs or in the general curriculum (Odom, Horner, & Snell, 2007).

Since the ruling on this case and others, the number of students placed in EMR classes reduced by close to half (Odom, Horner, & Snell, 2007). More African American students are now included in general education curriculum as opposed to special education classes. This case also impacted the jobs of school psychologists. Before, the school psychologists just administered the standardized IQ tests and students were placed in special classes based on their score (Odom, Horner, & Snell, 2007). However, this changed following the filing of the Larry P. v. Riles case.

This was because the case influenced the legislature to make a declaration that prohibited placement of students in special education programs especially mentally retarded programs solely based on the IQ score. The legislature required that a complete psychological examination be done on the students by a certified school psychologist and the examination was required to include factors such as cultural background, developmental history, and school achievement (Odom, Horner, & Snell, 2007). These factors were supposed to support findings of the intelligence test score.

In addition, the examination was supposed to include assessment of the students’ ability to perform everyday tasks and to engage in social activities (Odom, Horner, & Snell, 2007). No doubt the courageous six African American elementary pupils impacted the job of school psychologists and transformed the American special education system in general. 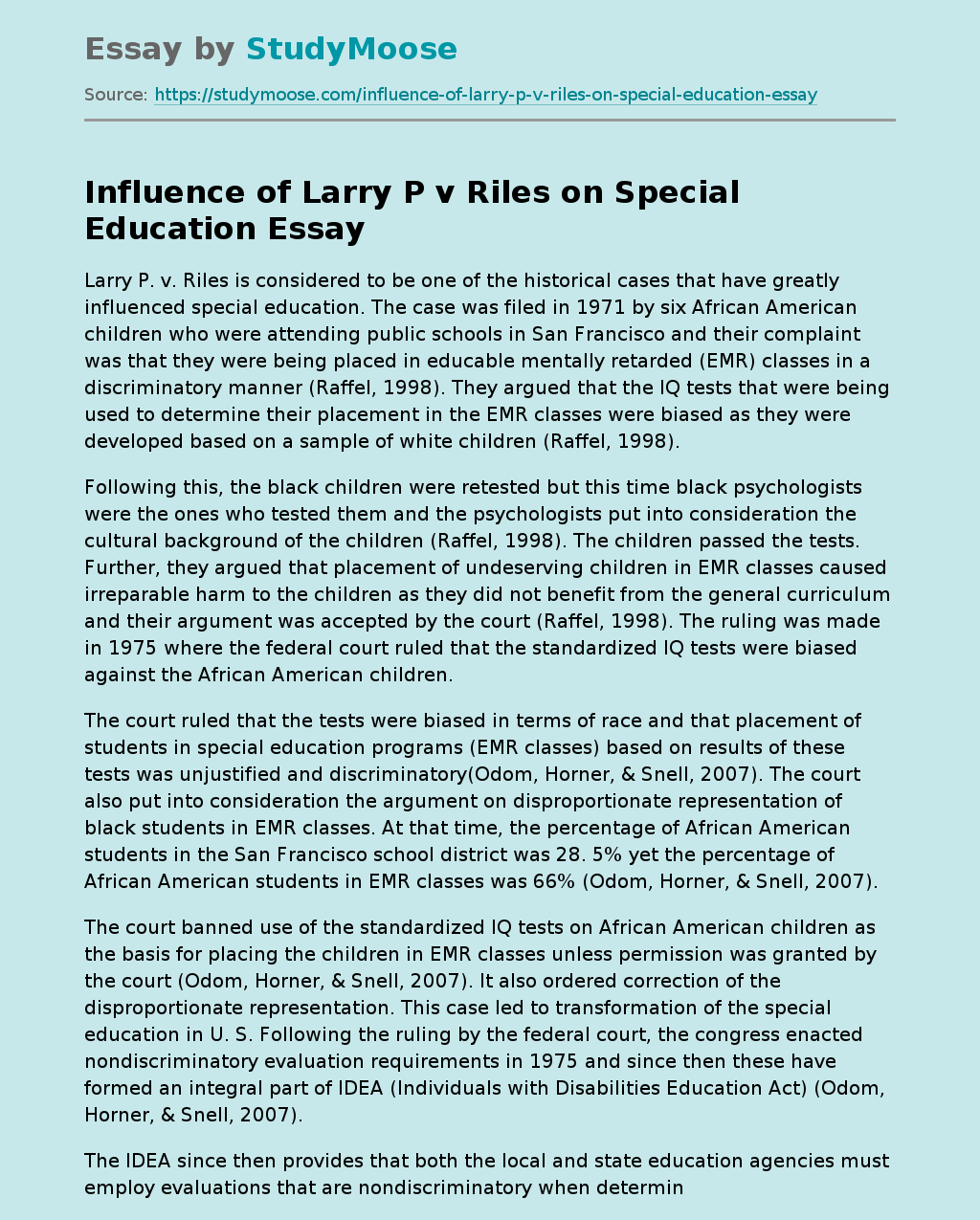