In the novel Montana 1948 we learn of a character named Wes. Throughout the story we are given detailed information about Wes’ personality. Wes is neither a strong nor weak man. As many people, he has certain aspects of his character that portray weakness, and other aspects that portray strength. There are not many people if any that could be described as either strong in every aspect, or weak in every aspect. After all each individual is different and it is impossible to label a person as just typically weak or typically strong.

Turn in your highest-quality paper
Get a qualified writer to help you with
“ Montana By Larry Watson ”
Get high-quality paper
NEW! AI matching with writer

Modesty to the extreme in which Wes displayed throughout the novel can be a sign of weakness; it is a general perception that a person in charge of maintaining the law would be a very confident person with a very high sense of right and wrong. This perception contradicts the way Wes acted in the novel. Wes was self-effacing and never drew any attention to himself. Wes had a very high status in his community due to his profession and his family but he never even wore his badge when on duty nor did he carry his gun.

This is just one of Wes’ characteristics that may portray him to be a weak man.

Wes let his father run his life. Whilst his father was a very powerful man in the town of Bentrock, such things do not usually apply to family life. Wes had a law degree but when his father decided that Wes was to become Sheriff of Mercer County that was exactly what happened.

It would never have occurred to Wes to refuse. Throughout the novel we see on many occasions Julian’s impact on Wes’ life, the most obvious ones being Sheriff and Wes not wanting Julian to find out about the allegations made against Frank because then he would have to face his father and explain why he was investigating his own brother. Such a lack of confidence especially when it came to dealing with family members could definitely portray Wes to be a weak man.

The modest and “self-effacing way” in which Wes acts during the novel could also be interpreted as a strength. It could be interpreted as Wes didn’t not need to parade him self around town and gather the attention of the townspeople to be comfortable with himself and his profession. Was Wes’ self-effacing way really an antic that would get the townspeople to trust him and thus lead him to an easier way to crack cases? Wes did have a very unique way of building a case against a suspect, which was consistent with his self-effacing and quiet ways. This characteristic as well as being portrayed as weakness could be portrayed as a strength.

Wes’ seeming lack of confidence when it came to dealing with his father could also be interpreted as great loyalty and respect. It is possible that Wes’ did not want to hurt or disappoint his father. Not being able to turn down the Sheriff’s badge may mean that Wes’ saw this meant a lot to his father; his father wanted to keep the badge in the family and Wes felt that it was his duty to keep up the reputation his father has strived to build within the community and keep the badge in the Hayden name. Loyalty is a very good characteristic to have and it also can portray strength.

It is impossible to label someone as just typically weak or just typically strong. It all depends on the way individuals interpret certain situations or characteristics. Wes’ character could be seen in many different lights it is just simply a matter of the way each individual wishes to interpret the matter. Nobody can categorize a person into either of the two groups for certain other than the person themselves, nobody knows how another persons mind works and therefore can only assume and interpret what they have seen or heard and interpretation always leaves the space open for another’s opinion. 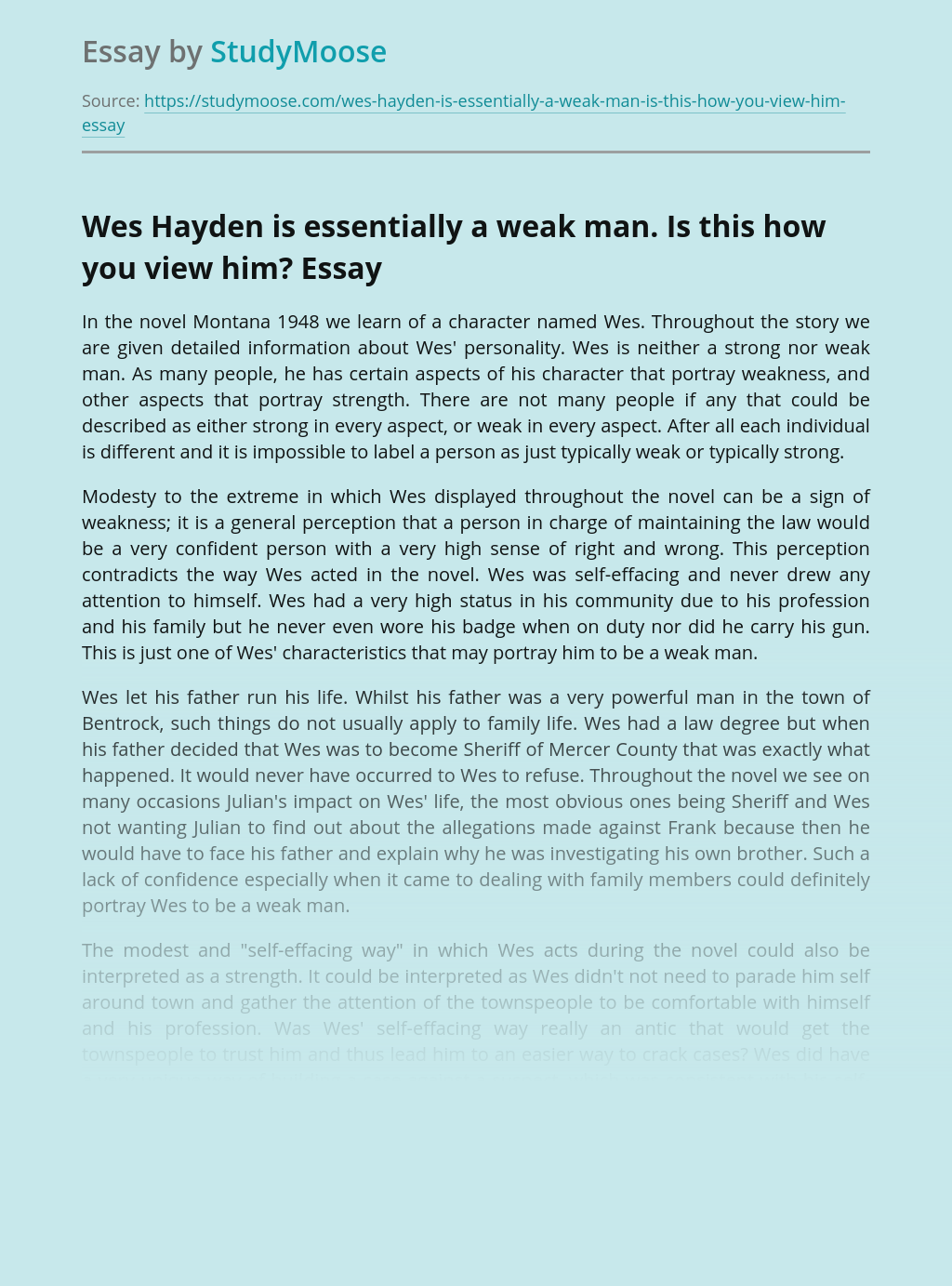 Turn in your highest-quality paper
Get a qualified writer to help you with
“ Montana By Larry Watson ”
Get high-quality paper
Helping students since 2015
Stay Safe, Stay Original