Montana 1948 and the Abuse of Power

In the novel “Montana 1948” you see a common issue that is around still in our everyday lives. This issue is the abuse of power and how it leads to consequences that sometimes might be devastating. You see this in our everyday lives with the Government and also many times in are families across the nation. In the novel there are many examples of this in the Hayden family. Wes, Frank and their father all are very powerful due to their back ground.

Don't use plagiarized sources. Get your custom essay on
“ Montana 1948 and the Abuse of Power ”
Get custom paper
NEW! smart matching with writer

Julian Hayden is where the abuse of power effect many people’s lives and ends up hurting his own family in the long run.

Grandpa Hayden’s corruption and abuse of power should be blamed for the tragedies. You first find this out when David explains, “He wanted, he needed, power … He was a dominating man who drew sustenance and strength from controlling others.” (Watson 20). Also when David visited Len after Marie’s death, Len talked to him about being a sheriff in Montana.

He told David, “You know what your granddad said it means to be a peace officer in Montana? It means knowing when to look and when to look away.”(Watson 93).

Len saying this suggests that to Julian, being the sheriff does not mean keeping justice and doing the right thing; instead it brings power and the right to hide the truth. Grandpa Hayden tolerated Frank for molesting Indian girls and used his powers to cover up for him. This gave Frank the ability to continue to sexually assault girls without being punished. This also led to murder and in Frank committing suicide, Wes having to leave town and Julian losing both of his sons. From this, we can see that corruption and power are causes of the tragedy.

This issue is very important because even in today’s society you see events like this happen all the time. Some cases are even more severe because it’s at a much larger scale where it affects a whole country sometimes even makes history. For example with our government today we are continuously learning things the government tries and hide things from the citizens. Some of these things include warrantless wire tapping, kidnapping and illegal detention and other government secrecies that abuses power and also violates our rights as citizens of the Unites States. This creates distrust in the government and chaos among the citizens.

Celebrities, sports stars and wealthy people are good examples of showing how the abuse of power is used in our modern day society. For example Ray Rice (Running Back from the Baltimore Ravens) violently assaulted his Fiancée and completely knocked her out unconscious. From this incident there should be some consequences to help him learn his lesson. Instead our judicial system allows wealthy people to keep doing these horrible crimes and only being assessed a bail fee. This demonstrates how corrupt and how the abuse of power is still very existent in not only government but also in people lives still today.

Abuse of power is clearly demonstrated in the novel “Montana 1948”. This book just displays how people all around the world have been dealing with the same problem for quite a while. Abuse of power is problematic because the consequences for this issue are devastating and sometimes fatal. This is shown in “Montana 1948” and also in our everyday lives. This issue will never be fixed if Power is given to people who can’t handle it; history will keep repeating itself. 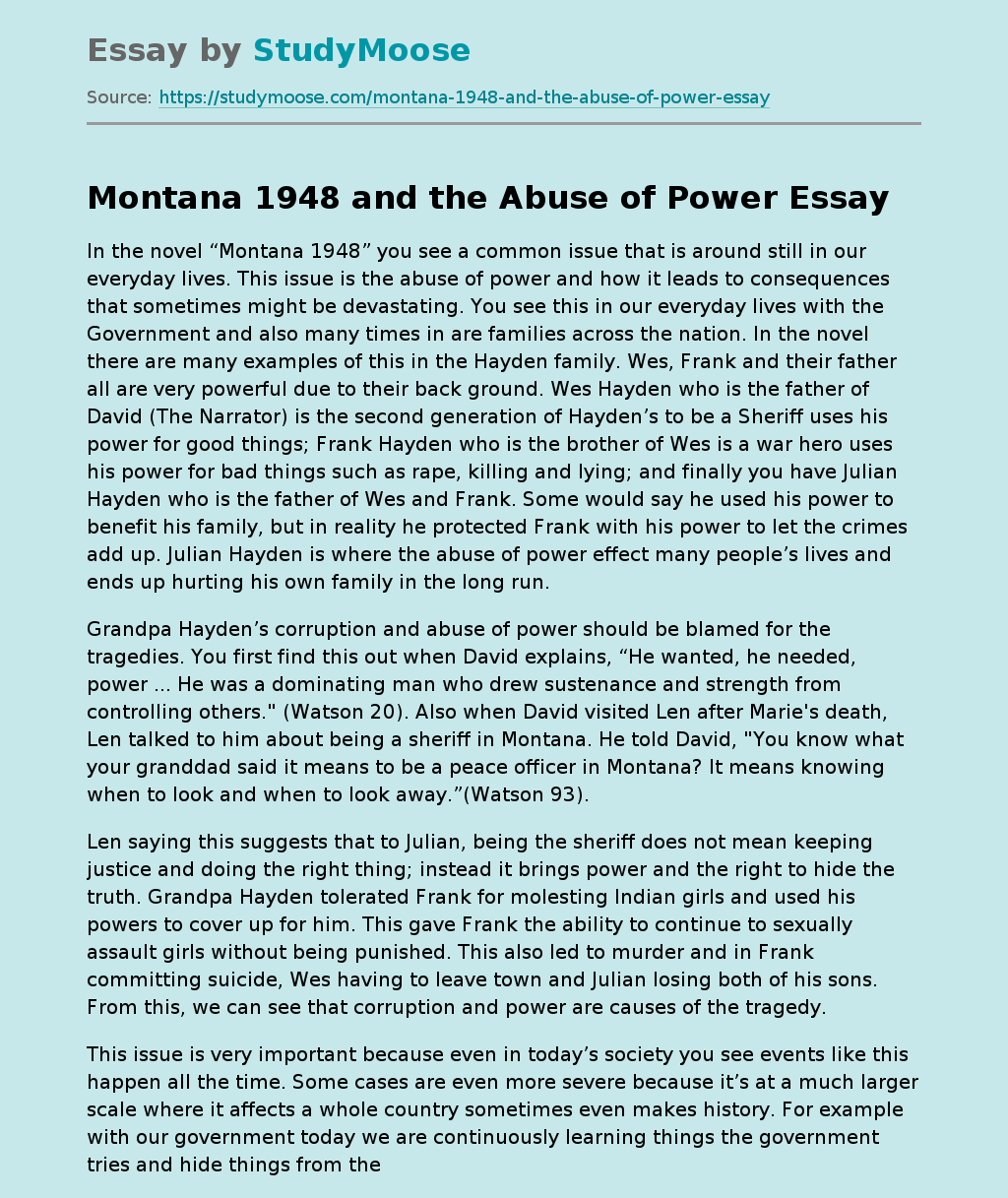