Compare and Contrast for Montana 1948

Is it right to say a man with wealth and power can do whatever he wants? From the viewpoint of the novel “Montana 1948”, the answer is absolutely no. The novel has drawn a picture of Hayden family, the most respectful and dominating family in town, being thrown to chaos just because of the crime a family member committed. Even though two main characters in this novel, Frank and Wesley, share some similarities from their childhood environment, the three main contrasts between them lead them to different endings.

Turn in your highest-quality paper
Get a qualified writer to help you with
“ Compare and Contrast for Montana 1948 ”
Get high-quality paper
NEW! AI matching with writers

Frank and Wesley grew up together and shared the same education background, therefore they are alike in their appearance, credentials, spouses choices, and prejudice attitudes. They are both tall, broad-shouldered and pleasant-looking. They are all intellectual people as Frank is a doctor and Wesley is a law school graduate. They both marry to two beautiful and highly-educated women from another town. We can see how alike they are from David’s observation: “From that height I noticed something I had never noticed before.

I noticed how the two men were brothers in posture and attitude (page 73)”.

The significance of this quote is they resemble each other so closely that it’s not strange if they share the same attitude towards some matters. One specific example of this attitude is that they both have prejudice against Indian people, just like their father. Despite their similarities, David still respects and admires his uncle Frank more than his father Wesley. David claims: “It was the way I always felt when the two of them were together.

Brothers naturally invite comparison, and when comparison was made between those two, my father was bound to suffer (page 24)”. From this quote, we understand that the more David admires about Frank, the more he feels sorry and disappointed in his father..

David has this feeling towards his father because as being compared to Wesley with his severely injured leg, Frank looks more well-built with an athletic grace that Wesley lacks. Moreover, Wesley doesn’t fit neither David’s ideal of what a sheriff should be nor his mother’s ideal at all. On the other hand, Frank is a genuine war hero, a dedicated doctor, his father’s favorite son, and a proud of Hayden family. Another difference between Wesley and Frank is the degree of their racism towards Indian people. Wesley doesn’t like Indian people because he thinks they are ignorant, lazy, and irresponsible.

His racist reaction stops at the level that he forbid David to wear the moccasins that he received in his birthday. Regardless of that attitude, he treats Indians like human beings with generosity, kindness, and respect. Unlike Wesley, Frank doesn’t express any discrimination on the surface; he accepts treatments for all white and Indian patients. However, his racist attitude is expressed at a higher degree; he took advantage of his occupation to sexually molest many Indian women and even committed murder. The most important difference between them is that Wesley is brave and courageous to execute justice while Frank is too coward to take his responsibility. Facing Frank’s horrific crime, Wesley chooses to go after the truth by investigating the accusation. Although he is placed in a complicated situation that compromises his position as a sheriff and his position as a son and brother, his final decision is to stand up to his father to execute justice.

Wesley states clearly his opinion: “David, I believe that in this world people must pay for their crimes. It doesn’t matter who you are or who your relations are; if you do wrong, you pay. I believe that. I have to (page 150)”. This quote explains how Wesley is thinking about the whole situation and why his final decision is to choose justice over family. Furthermore, it also indicates his opinion towards the rights and wrongs that Wesley wants David to understand. Contrary to Wesley, Frank doesn’t take any responsibility for what he did at all. When he molested those Indian women, he doesn’t think about the impact to his family at all.

When his crime is revealed, he doesn’t even try to confess to either his parents or his wife. On top of that, he shows his cowardice by choosing suicide instead of being punished. He has never concerned about the shame and pain he might have brought to his family. Although Frank and Wesley grew up under the same childhood environment and had some similarities in characteristics, the contrasts between them set them apart. Frank committed crime and ended up with his death, while Wesley chose justice and ended up losing his family. Obviously, a man has to pay for what he did, no matter how powerful, influential, or wealthy he is. 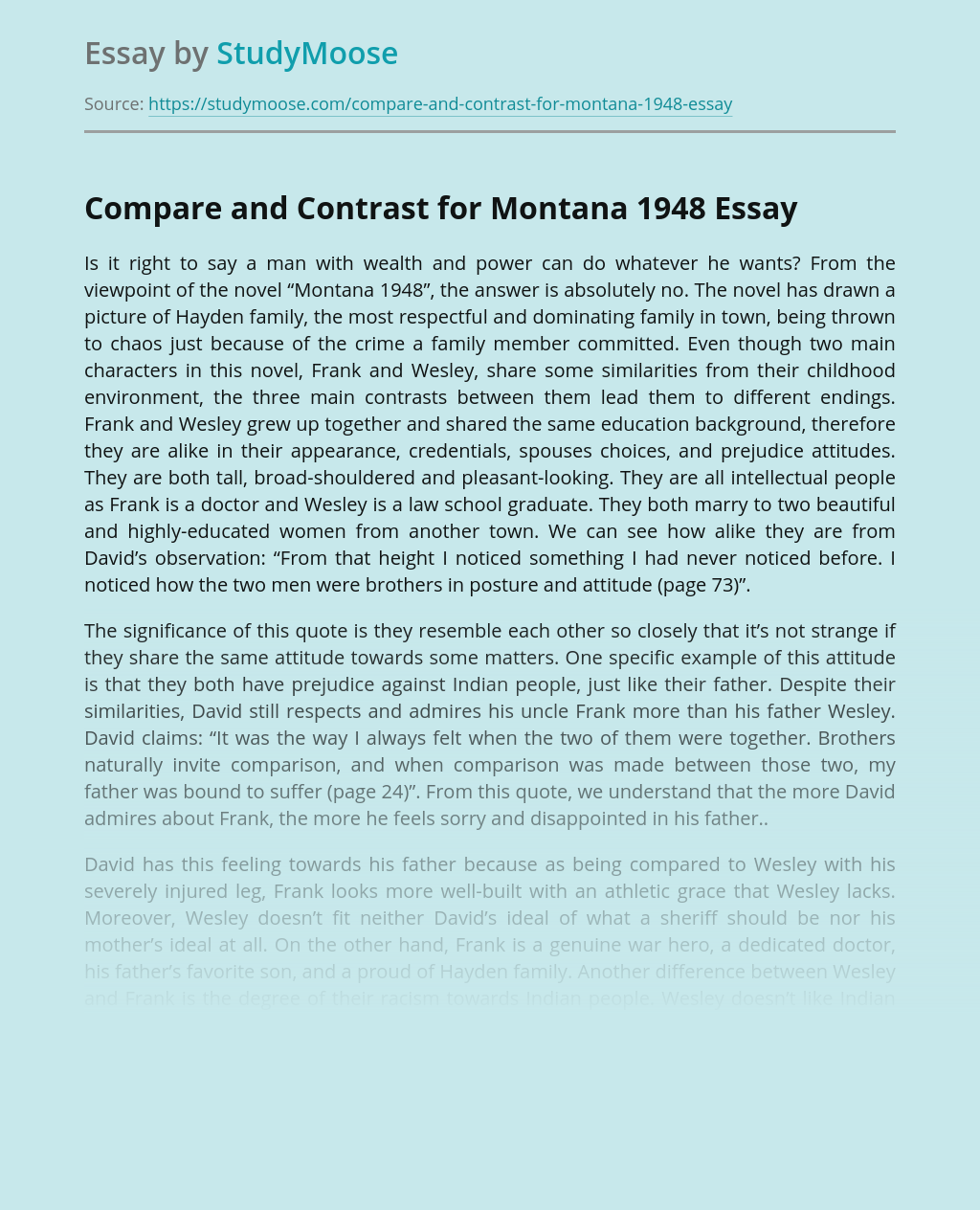 Turn in your highest-quality paper
Get a qualified writer to help you with
“ Compare and Contrast for Montana 1948 ”
Get high-quality paper
Helping students since 2015
Stay Safe, Stay Original