The League of Nations: Strengths and Weaknesses

Some may argue that the League of Nations was a success while other would say it was a total failure, but, failure or not, the concept was far ahead of its time. But nonetheless, the organisation had various flaws that contributed to its downfall. The League was created simply because Woodrow Wilson demanded it, in 1919 after the end of World War I. It was to promote international peace and righteousness. Wilson wanted countries to talk out their problems instead of resorting to violence and war.

Don't use plagiarized sources. Get your custom essay on
“ The League of Nations: Strengths and Weaknesses ”
Get custom paper
NEW! smart matching with writer

It was made of forty-two countries and by the 1930s, the number rose to sixty. There were various flaws in the League, but it still achieved many things in its short life. The League of Nations had four main functions: to stop war from ever happening again, disarmament, to make the world a better place by improving people’s lives, and to enforce the Treaty of Versailles.

The League did not stop war from ever happening again; it is possible that it helped cause World War II, but the League did successfully settle two cases that could have resulted in war.

In Corfu, the League managed to get Italy to leave Greece. In 1925, they also settled disagreements between Greece and Bulgaria. They also persuaded Yugoslavia to leave Albania and stop the dispute over the Aaland Islands. In attempting to settle these disputes, the League forced the Greeks to pay Italy money and apologize even though Mussolini was the one who invaded Greece. Again, in Bulgaria, the League condemned the Greeks and forced them to leave.

As for disarmament, I would say this was one of the factors that led to the downfall of the League. The motives behind this action are honorable but if disputes happened, the League had no way of dealing with them. The Kellogg-Briand Pact in 1928 which was signed by sixty-five countries and outlawed war, was completely ignored. In the 30’s, the League’s disarmament talks came to a halt. Germany refused to agree because they wanted quality with Great Britain and France. The League had four powers, The Power of the Covenant which kindly reminded countries that they had promised to obey the League’s rules. The Power of Condemnation which said if any countries broke a rule, the league had the power to shake their head and frown disapprovingly.

The Power of Arbitration made the League into councilors who would listen to angry countries and help settle their problems. Lastly, with the Power of Sanctions, the League could stop other countries from trading with it. This was their most influential power but it was absolutely useless. When Japan was being “naughty”, the League applied the Power of Ssanctions which would have devastated Japan because they have had no natural resources and that would have stopped them. ExceptHowever, countries continued to trade with Japan because their economyies was dependent on the Japanese. Again, when Hitler came into power and began invading small, weak countries formed from self-determination; the League didn’t have the power to protect them.

The League did, however, manage to make the world a better place. They did not abolish slavery completely but they freed 200,000 slaves in Africa and Burma. The League significantly cut down on leprosy and malaria which could have killed millions of people. They housed, fed and dealt with over a million Prisoners of war. Made drugs illegal and shut down four large pharmaceutical companies in Switzerland. The League helped Austria and Hungary with their struggling economy.

To enforce the Treath of Versailles, the League forced Germany to pay reparations and made sure they followed the rules. Great Britain, France and Belgium invaded and forced Germany to pay. In 1923, Germany stopped paying. Britain and Belgium did not invade and only France went in. The League of Nations gave the Germans no reason to respect and agree with them. The League took control of Saar and demiliterized Rhineland which made the German’s very vulnerable. In the beginning, the League didn’t even allow Germany to join.

Representation was often a problem among the League. The idea was to encompass all the nations of the world but most of them never joined. The League was mainly made up of European countries. The main powers were France, Great Britain, Italy and Japan. The General Assembly which included all countries, only met once a year. Almost all decisions were left in the hands of the four major powers. The greatest weakness of the League, was it’s lack of the United Sates of America. This took away most of the League’s potential power. At that time, the United States was one of the leading countries in economy and wealth. Since the United States refused to join the League, the two most important members were UK and France who often disagreed with one another.

The League was made up of mostly members from the Alliance whom all had biasts towards the Axis. This biast caused many Axis to struggle in trying to rebuild their countries. One of the most important weaknesses, was that the four powers acted in ways that their countries could benefit. Most of them acted in their own nations interests and very few were committed to the goals of the League. Even though there were four powers, UK and France were the key figures. To pass anything in the League, it needed unamity and all countries had to agree. This made it difficult for them to achieve anything. The league was often indecisive and required unanimouse votes. This made reaction to problems slow, inconclusive and not very effective. Sometimes, impossible.

In conclusion, the League of Nations had it’s strong points and weaknesses. Though they did not achieve much during their short life, the idea alone should have been an achievement. The concept of countries working together to achieve world peace was inconceivable. The League did not have its own power but was mainly dependent on the contributions of other countries. The dependency on countries caused some decisions to be unfair and bias. Though the League of Nations was destroyed during World War II, it gave birth to the United Nations which today, still helps keep world peace.

The League of Nations: Strengths and Weaknesses. (2016, Jul 19). Retrieved from http://studymoose.com/the-league-of-nations-strengths-and-weaknesses-essay 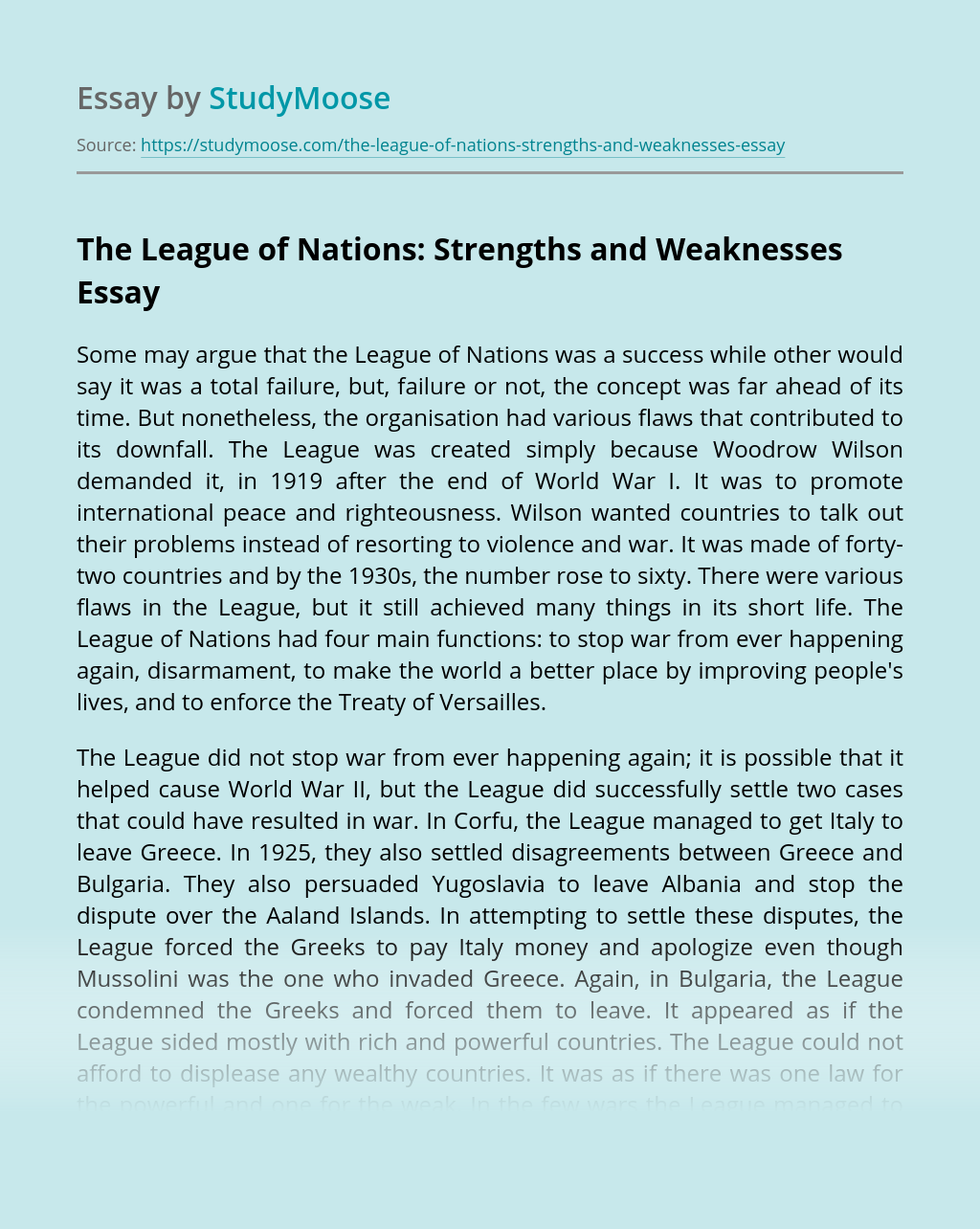