Don't use plagiarized sources. Get your custom essay on
“ The League of Nations Had Its Greatest Successes in the Work of the Special Commission ”
Get custom paper
NEW! smart matching with writer

The main achievements the league wanted to gain were World Disarmament, to improve living and working conditions, To enforce the treaty of Versailles and to stop all wars. The International Labour Organisation (ILO) was created to improve living and working standards in the world, The health committee sought to put a stop to the spread of prominent diseases such as Malaria and Polio,

The slavery commission wanted to end the slavery, trafficking and prostitution rings and the Commission for Refugees sought to repatriate all the prisoners of world war 1 back to their countries of origin.

In terms of the League’s desire to end war, the only criteria that can be used to classify a success, was whether war was avoided and a peaceful settlement was reached after a crisis between two nations. One of these disputes was made by Sweden and Finland regarding the Aarland islands. These islands are near enough equal distant between Finland and Sweden.

They had traditionally belonged to Finland but most of the islanders wanted to be Swedish. Neither Sweden nor Finland could come to a decision as to who owned the islands and in 1921 they asked the League to make a judgement. The League’s decision was that they should remain with Finland but that no weapons should ever be kept there. Both countries accepted the decision and it remains in force to this day meaning that this was a successful resolution by the League. However the league was very unsuccessful in resolving a conflict between Poland and Lithuania regarding the city of Vilna. Many years before 1920, Vilna had been taken over by Russia. Historically, Vilna had been the capital of Lithuania when the state had existed in the middle Ages. After World War One, Lithuania had been re-established by Wilson’s policy of ‘self-determination’ and Vilna seemed the natural choice for its capital.

However, by 1920, 30% of the population was from Poland with Lithuanians only making up 2% of the city’s population. In 1920, the Poles invaded Vilna. Lithuania asked for League help but the Poles could not be persuaded to leave the city and it was in the league’s interest not to upset the Poles. Vilna stayed in Polish hands until the outbreak of World War Two. The use of force by the Poles had gained them extra land. Article 11 of the League’s Covenant stated:

“Any war of threat of war is a matter of concern to the whole League and the League shall take action that may safe guard peace.” Therefore, any conflict between nations which ended in war and the victor of one over the other must be considered a League failure. At a social level, the League did have success and most of this is easily forgotten with its failure at a political level. Many of the groups that work for the United Nations now grew out of what was established by the League. The ILO put pressure on the big industrial companies to improve the working conditions and pay of its staff or face sanctions.

The commission for refugees successfully repatriated 400,000 refugees and were the first commission/organisation to come up with the idea of a passport for all these people thanks to the help of Norwegian explorer, Fridtjof Nansen and the Health Organisation started the first ever campaign to wipe out leprosy. The League failed to stop a bloody war in Turkey but it did respond to the humanitarian crisis caused by this war. 1,400,000 refugees had been created by this war with 80% of them being women and children. Typhoid and cholera were rampant. The League sent doctors from the Health Organisation to check the spread of disease and it spent £10 million on building farms, homes etc. for the refugees. Money was also invested in seeds, wells and digging tools and by 1926, work was found for 600,000 people. A member of the League called this work “the greatest work of mercy which mankind has undertaken.”

This idea of wiping out from the world a disease was taken up by the United Nations with its smallpox campaign. Work was done in the Third World to improve the status of women there and child slave labour was also targeted. Drug addiction and drug smuggling were also attacked by the closure of 4 drug companies in Switzerland. These problems are still with us in the 21st century – so it would be wrong to criticise the League for failing to eradicate them. If we cannot do this now, the League had a far more difficult task back then with more limited resources than what we have now. The greatest success the League had involving these social issues, was simply informing the world at large that these problems did exist and that they should be tackled. No organisation had done this before the League of Nations. These social problems may have continued but the fact that they were now being actively investigated by the League and were then taken on board by the United Nations must be viewed as a success. To conclude, I believe this statement in question to be, on the whole, quite accurate.

The league realised that they had to do something after World War I and by setting up the special commissions to try and wipe out one problem after another; I would say that they went the right way about it. The ILO, The health committee, the slavery Commission and the Commission for refugees together did some sterling work to try and end some of the main problems in the world at the time. If the League hadn’t tried to tackle these problems with the special commissions, I think there would have been far more devastation and violence throughout the 1920’s. Some people might say the league was unfairly dominated by the big 3, but I would have thought that if countries like Switzerland or The Netherlands would have dominated it, I don’t think it would have been anywhere near as successful.

There would have been far more resistance by the big 3, as they were far bigger countries in terms of size and population, and far less understanding of the different situations in the world, as both Switzerland and the Netherlands had not been affected by World War I at first hand. America’s unwillingness to join was a huge setback for the league though, as I think the League would have been far more successful had America got involved in some of the many issues that affected the world at the time, such as the incident regarding Poland and Lithuania over the city of Vilna.

The League of Nations Had Its Greatest Successes in the Work of the Special Commission. (2016, Apr 11). Retrieved from https://studymoose.com/the-league-of-nations-had-its-greatest-successes-in-the-work-of-the-special-commission-essay 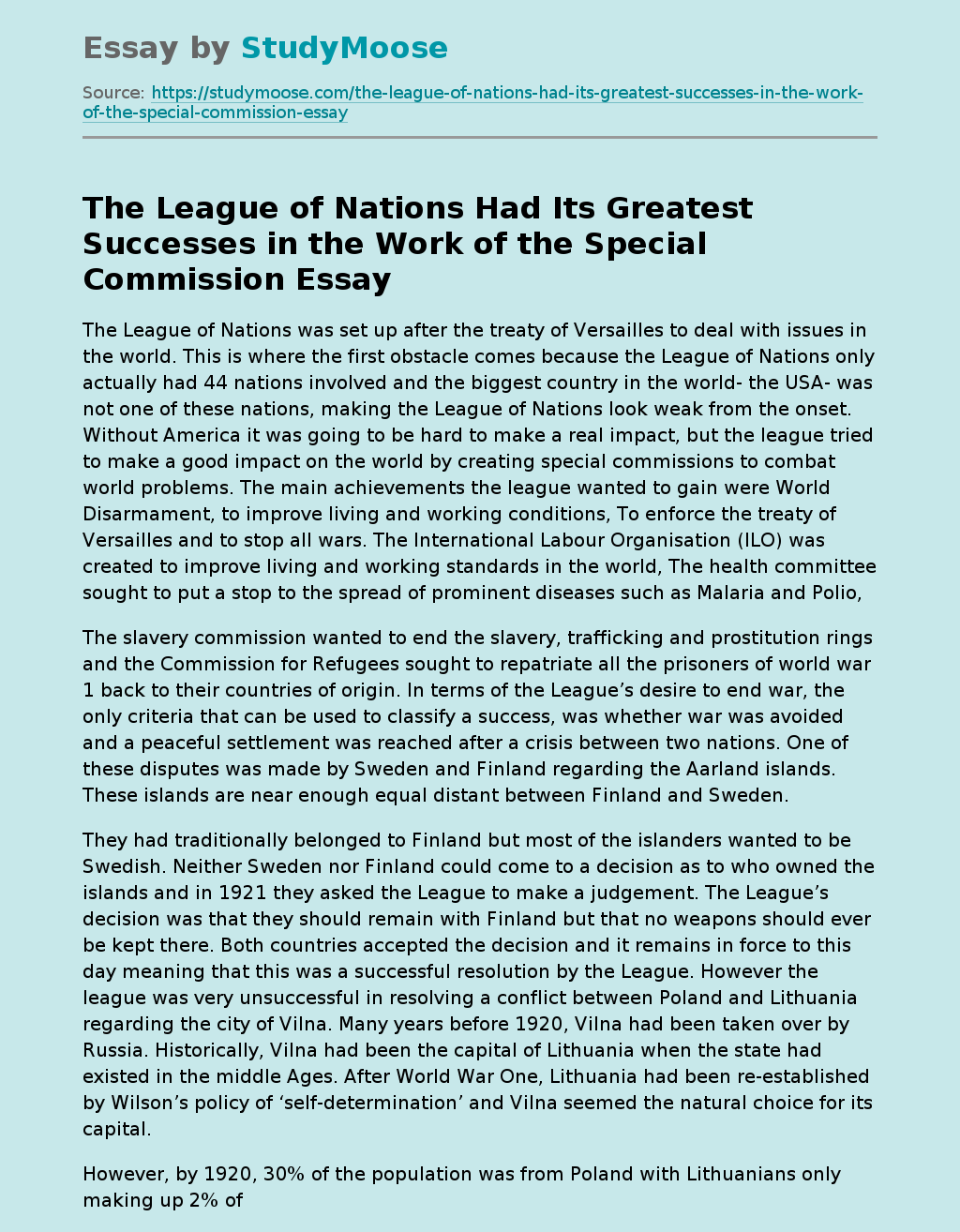