The failure of the League of Nations

The failure of the League of Nations in the 1930’s was due to two main reasons.

Firstly, the absence of the USA. The League of Nations was thought up by the American president Woodrow Wilson it was one of his 14 points. He had come up with the idea, the League was in a sense his child, yet he was allowed no part in it. The American congress had refused to become members of The League and this caused all sorts of problems.

Don't use plagiarized sources. Get your custom essay on
“ The failure of the League of Nations ”
Get custom paper
NEW! smart matching with writer

America had the biggest trade industry and without them agreeing to economic sanctions they would be no use at all.

That is what happened when Mussolini invaded Abyssinia, the League imposed sanctions but America continued to trade with Italy, this meant that the sanctions were useless. Another sanction that did not work without the help of the USA was military sanctions. Britain and France’s armies had both been weakened by the war and the rest of the league was relying on them to provide the troops.

Secondly Britain and France put their own interests in front of the interests of the League. They made secret pacts with other countries behind the league’s back.

In 1935 – during the crisis with Mussolini, the British and French Foreign Ministers, tried to make a pact with Mussolini. It was named the Hoare Laval pact and it aimed to give Mussolini two-thirds of Abyssinia. They were prepared to carry out the pact without even consulting with the League or with Abyssinia’s President Haile Selassie. Britain and France also made a pact with Italy know as the Stressa Pact, this formalised commitment to stay united with Italy against Germany.

It was obvious that they were more interested in keeping on good terms with countries then bringing justice to countries that had done wrong (the Hoare Laval pact) instead of punishing Italy they were going to give them almost everything they wanted just to keep the Stressa Pact in place, and to stay on good terms with Italy. Britain and France refused to use their troops for the League’s army. They had both been badly weakened by the war and the last thing they wanted was for their troops go fighting again. This meant that the League had no army and that Military Sanctions were useless. Britain and France also held back on economic sanctions as everyone had been hit badly by the depression and imposing economic sanctions helped no one.

Overall I think that the most important reason for the failure of the League was that Britain and France put their own interests in front of the interests of the League. I think this because the league was doing really well all the through the 1920’s they handled all their crisis well, however as soon as Britain and France started putting their own needs before the League’s everything went wrong and the League made all the wrong decisions by in the end was completely disgraced.

The failure of the League of Nations. (2016, Jul 21). Retrieved from https://studymoose.com/the-failure-of-the-league-of-nations-essay 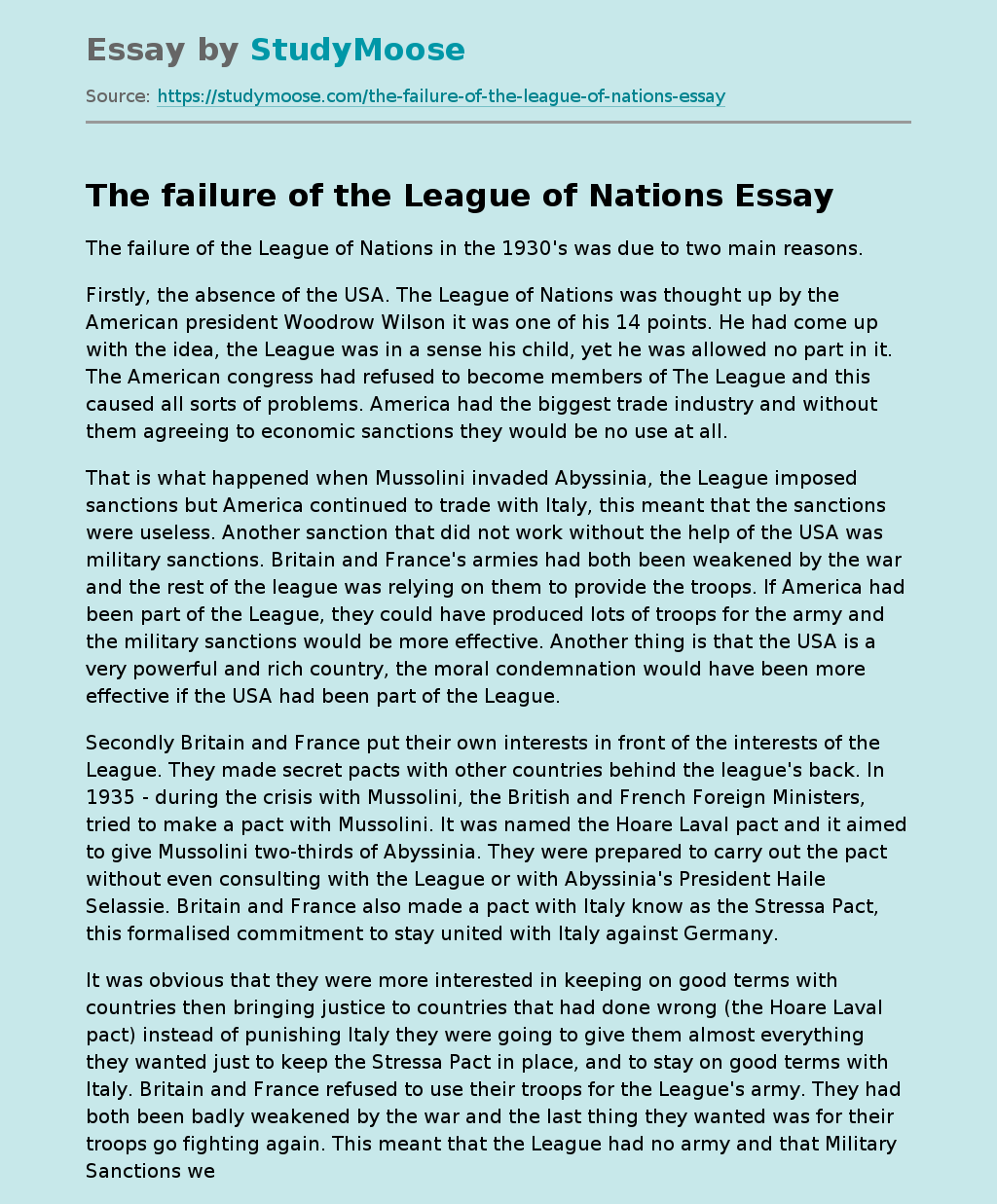