Global warming is the greatest challenge facing our planet. It is, in fact, the increase in the temperature of the earth’s neon- surface air. It is one of the most current and widely discussed factors. It has far-reaching impact on biodiversity and climatic conditions of the planet. Several current trends clearly demonstrate that global warming is directly impacting on rising sea levels, the melting of ice caps and significant worldwide climate changes. In short, global warming represents a fundamental threat to all living things on earth.

Don't use plagiarized sources. Get your custom essay on
“ Global Warming : causes, effects and remedies ”
Get custom paper
NEW! smart matching with writer

Global average temperature rose significantly during the past century.

The prevailing scientific view is that most of the temperature increases since mid-20th century has been caused by increases in atmospheric greenhouse gas concentrations produced by human activity. Most scientists agree that planet’s temperature has risen 0.5 degree Celsius since 1900 and will continue to increase at an increasing rate. As a result, the world is getting warmer. The year 1990 was the hottest year in the last century.

Together with 1991, the years of 1983, 1987, 1988 and 1989 have been measured to be the warmest six years in the last hundred years. The year 1991 was the second warmest year of the past century. The consequences of the rise in temperature is being felt all over the globe the findings of scientific research done in this field reveal that the temperature of the earth is likely to rise from 1.4°C to 5.8°C within a period of 100 years. Unfortunately, the imbalance which we have created between our life and earth is already showing the signs disasters in the form of flood, cyclones, landslides, tsunami, drought, etc.

If the imbalance continues to rise, one day this will pose a question mark on the existence of this planet. Carbon dioxide (C02) which is an important constituent of environment is causing a warming effect on the earth’s surface.

It increases the evaporation of water into the atmosphere. Since water vapour itself is a greenhouse gas, this causes still more warming. The warming causes more water vapour to be evaporated. The C02 level is expected to rise in future due to ongoing burning of fossil fuels and landuse change. The rate of rise will depend largely on uncertain economic, sociological, technological and natural developments. Other gases such as methane, CFCs, nitrous oxide, tropospheric ozone are also responsible for global warming. Increases in all these gases are due to explosive population growth, increased industrial expansion, technological advancement, deforestation and growing urbanisation, etc. Trees play a significant role in the global carbon cycle.

They are the largest land-based mechanism for removing carbon dioxide from the air. Deforestation is checking these positive processes. It is the second principle cause of atmospheric carbon dioxide. Deforestation is responsible for 25 per cent of all carbon emissions entering the atmosphere, by the burning and cutting of 34 million acres of trees each year. Everyday over 5500 acres of rainforest are destroyed. As a consequence of massive loss of forests, global CO, levels rise approximately 0.4 per cent each year, the levels not experienced on this planet for millions of years. As we know the forests are the great absorbers of CO,,. There is a close relation between global warming and population growth. Today the large population on earth is using the technologies which are destructive for the earth.

Approximately, 80 per cent of atmospheric C02 increases are due to man’s use of fossil fuels either in the form of coal, gas or oil. A large portion of carbon emission is attributed to the burning of gasoline in internal-combustion engine of vehicles. Vehicles with poor gas mileage contribute the most to global warming. Besides, the sulphur group gas is the most harmful for this. Its contribution is 30 per cent in global warming. This gas is also emitted from the burning of fossil fuels. Increase in global temperatures will cause rise in sea level. It will lead to melting of glaciers, changes in rainfall patterns, increased intensity and frequency of extreme weather. As per the latest survey report the rate of melting of glaciers has seen sharp increase in recent times. Even those glaciers are affected from global warming which have been considered permanent. The shrinking of glaciers is going to pose a major problem of drinking water. The sea levels as a result of melting of glaciers have risen from 0.35 mm to 0.4 mm.

Scientists have warned in their reports that most of the glaciers will disappear within a period of 15 to 25 years. It will create problems of drinking water and food grains in most of the North American countries. India is not unaffected from it. The Himalayan glaciers have shrunk about 30 per cent after 1970. The rise in sea levels is a major cause of concern. A large number of cities located in coastal areas will submerge in the sea. Besides, many island countries will ultimately “lose their existence and will be washed away from the surface of the earth. The damage of rising sea levels is diverse. Buildings and roads close to the water could be flooded and they could suffer damage from hurricanes and tropical storms. Experts believe that global warming could increase the intensity of hurricanes by over 50 per cent. In addition, as the sea rises, beach erosion takes place, particularly on steep banks. Wetlands are lost as the level rises. Rise in atmospheric temperature will lead to the outbreak of air¬borne and water-borne diseases. It would also contribute to the rise in death caused by heat.

The problem of drought would be frequent. Consequently, malnutrition and starvation will pose serious challenge before humanity. Global warming is a great threat to the flora and fauna of the earth. A large number of species of them may become extinct. The expanse of desert would increase. Low rainfall and rising temperature could add to the intensity and frequency of dusty storm. This in turn will immensely affect the quality of agricultural land, ultimately causing adverse effect on agricultural produce. It would have far-reaching socio-economic impact. In Indian context, the impact of global warming is a matter of grave concern. As is well known, India is mainly an agricultural country and agriculture here is gamble of the monsoon, e.g. largely depending on rainfall.

Though it is to affect the whole country, the worst likely impact would be on central and northern India which is high-yielding parts of the country. These are the regions which produce the largest agricultural yield. The rise in atmospheric temperature and fall in rain would naturally result in decline in crop production. Moreover, it would have great effect on biodiversity as well. The growing concerns over global temperatures have led to the nations, states, corporations and individuals to draw out a plan of action to avert the situation.

As a result the world’s primary international agreement on combating global warming was reached in Kyoto in 1997 which came to be known as Kyoto Protocol. However, ten years have passed; the situation does not appear to be very changed. It seems that the member countries are not very serious about its devastating effects. In addition, forestation can be of great help in this regard.

Planting more trees and reducing timber cuts worldwide will help restore the imbalance. Secondly, we must follow on environmental policy of ‘reduce, reuse, recycle’, i.e. promoting the reuse of anything. Thirdly, the use of fuel-efficient vehicles should be promoted as these vehicles have lower emissions of harmful gases. Fourthly, every individual should be aware of the importance of the protecting environment. Besides, eco- friendly technologies must be promoted, and must be substituted with the technologies which cause great emission of global warming gases. Public awareness campaign can be of great help in this regard because unless each and every individual is aware only governments’ effect cannot bring desired difference. 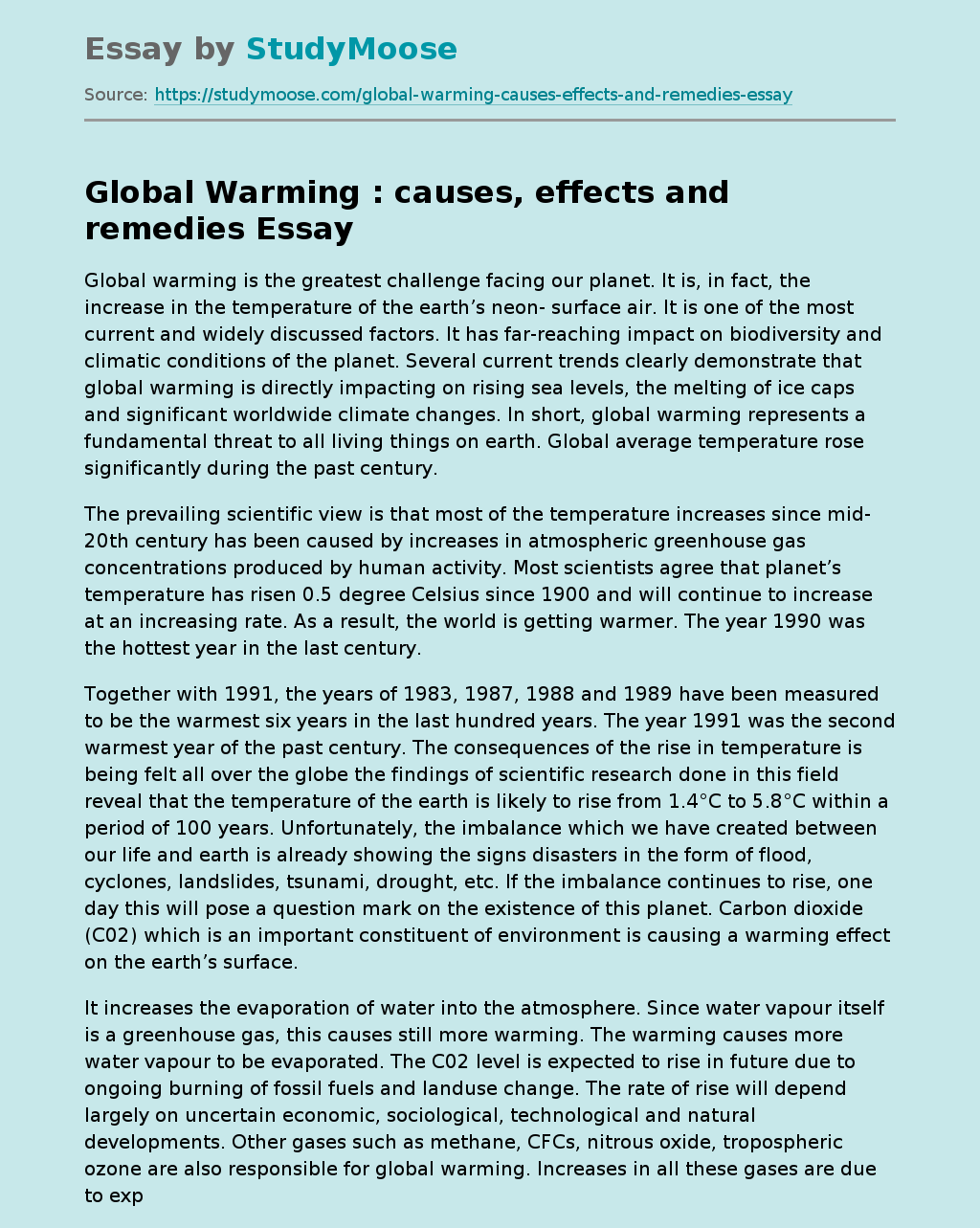