Specific Purpose: To persuade my audience to be concerned about climate change and global warming.

The earth’s average temperature has increased about 2 degrees Fahrenheit during the 20th century. What’s the big deal? Two degrees may sound like a small amount, but it’s an unusual event in our planet’s recent history. Earth’s climate record, preserved in tree rings, ice cores, and coral reefs, shows that the global average temperature is stable over long periods of time.

Don't use plagiarized sources. Get your custom essay on
“ Global Warming and Climate Change: Impact on Human Life ”
Get custom paper
NEW! smart matching with writer

Furthermore, small changes in temperature correspond to enormous changes in the environment. For example, at the end of the last ice age, when the Northeast United States was covered by more than 3,000 feet of ice, average temperatures were only 5 to 9 degrees cooler than today.

Tie to the Audience

Earth will be warmer between 2 and 6 degrees Celsius in the next century.

When global warming has happened at various times in the past two million years, it has taken the planet about 5,000 years to warm 5 degrees. The predicted rate of warming for the next century is at least 20 times faster. This rate of change is extremely unusual.

Today I’d like to talk about, first, how global warming affects human’s life. Second, how human activities affect global warming, and finally why it’s important for people to be aware of the global warming process.

[Transition into body of speech]: I’ll begin by telling you about effects of global warming in human’s life.

Global climate change has already had observable effects on the human’s life and environment. Effects on environment that scientists had predicted from global climate change are: loss of sea ice, sea level rise and, longer and more intense heat waves. The Arctic Ocean is expected to become essentially ice free in summer before mid-century. Global sea level has risen by about 8 inches since reliable record keeping began in 1880. It is projected to rise another 1 to 4 feet by 2100. This is the result of added water from melting land ice and the expansion of seawater as it warms. Droughts in the southwest and heat waves (periods of abnormally hot weather lasting days to weeks) everywhere are projected to become more intense, and cold waves less intense everywhere.

Global climate change also affects people more directly. Hardest hit will be those living in low-lying coastal areas, and residents of poorer countries who do not have the resources to adapt to changes in temperature extremes and water resources. As tropical temperature zones expand, the reach of some infectious diseases, such as malaria, will change. More intense rains and hurricanes and rising sea levels will lead to more severe flooding and potential loss of property and life. Hotter summers and more frequent fires will lead to more cases of heat stroke and deaths. Intense droughts can lead to an increase in malnutrition. On a longer time, scale, fresh water will become scarcer, especially during the summer, as mountain glaciers disappear, particularly in Asia and parts of North America.

Global warming is the unusually rapid increase in Earth’s average surface temperature over the past century primarily due to the greenhouse gases released by burning fossil fuels. Human-produced greenhouse gases such as carbon dioxide, methane and nitrous oxide have caused much of the observed increase in Earth’s temperatures over the past 50 years. Since the Industrial Revolution began in about 1750, carbon dioxide levels have increased nearly 38 percent as of 2009 and methane levels have increased 148 percent.

Carbon dioxide (CO2). A minor but very important component of the atmosphere. Carbon dioxide is released through natural processes such as respiration and volcano eruptions and through human activities such as deforestation, land use changes, and burning fossil fuels.

[Transition: By that time about 30-50 years from now, the worst consequences and higher temperatures of global warming will be irreversible for timescales far beyond the human lifespan.]

People should be aware of global warming. What clearly needs to be understood by everyone is that if the average global temperature rises just 3° C above pre-industrial levels, almost no one and no nation will be spared from severe and massive financial loss, suffering, and death that will make Earth into a living hell. We are now as little as just 10 -15 years away from where we are locked into this deadly 3°C temperature rise.

When we cross the near extinction carbon 500 ppm tipping point in about 25 to 30 years (about 2040’s), our average global temperature will inescapably soar to at least 4°C (7.2 degrees Fahrenheit). At 4°C, all ice on earth will begin melting as it has done repeatedly in the past, sea levels will eventually rise about 240-270 feet, and a large portion of humanity (as much as 30-60%) will die of starvation, or from rising temperatures and global warming’s other related consequences. At carbon 500 ppm many struggling or weakened governments and societies will collapse in many areas of the world.

As we can see that global warming is one of the biggest threats to our environment which people should be aware off.

I’ve told you about how climate change affects human’s life, and how human activities affects global warming and finally why should people be concerned about global warming now and in the future.

Tie Back to the Audience

Temperature histories from paleoclimate data (green line) compared to the history based on modern instruments (blue line) suggest that global temperature is warmer now than it has been in the past 1,000 years, and possibly longer.

I am going to interduce you NASA’s latest educational game, is part-pong, part-resource management and 100 percent retro. The goal is to slow the pace of global warming, and players learn about the global carbon cycle, different carbon sources and ways alternative energy and reforestation can help offset those sources. Take on the challenge if you think you have quick fingers and strong multitasking skills! 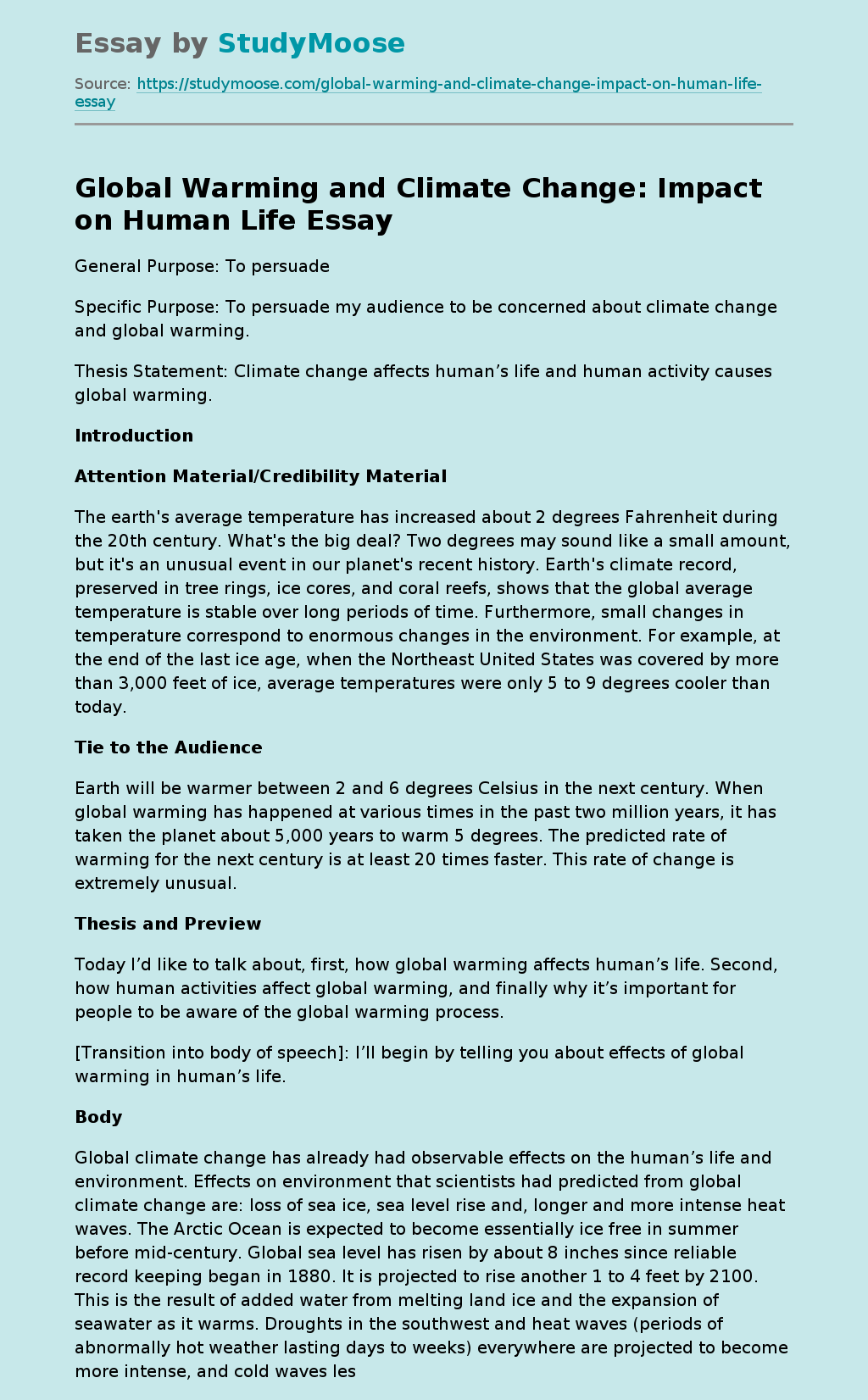