Title: Global Warming Specific Purpose: To inform the audience about three issues of how global warming is affecting our weather, animals, and our future. Thesis: According to National Geographic Average temperatures have climbed 1. 4 degrees Fahrenheit around the world since 1880 and by 2050, rising temperatures could send more than a million of Earth’s land-dwelling plants and animals down the road to extinction.

Introduction I. Open with Impact: Is the climate warming? The impacts of global warming will be felt across the globe.

A. The effect of global warming driving animals into extinction B. A rise in the amount of extreme weather disasters C. The change it will cause to the earth in the future II. Connect with the Audience: Do you think Global Warming poses a threat to you? According to National Geographic Average temperatures have climbed 1. 4 degrees Fahrenheit around the world since 1880 and by 2050, rising temperatures could send more than a million of Earth’s land-dwelling plants and animals down the road to extinction. III.

Credibility Statement: Studies of Global Warming have gained my interest within the past few years due to the extreme heat and natural disasters around the world. IV. Preview: Today I will be talking about the affect of Global Warming driving our animals in to extinction, a rise in the amount of extreme weather disasters around the world, and the change it will cause to the earth and our family’s future. Transition: Let’s begin with my first point – Body I. Main point: How the effects of Global Warming will drive our animals nto extinction, increase the amount of extreme weather disasters, and the change it will cause to our future.

A. “Global Warming Fast Facts” (National Geographic News, June 2007) 1. Average temperatures have climbed 1. 4 degrees Fahrenheit around the world since 1880. 2. Arctic ice is rapidly disappearing, and the region may have its first completely ice-free summer by 2040 or earlier. 3. Wildfires, heat waves, and strong tropical storms, are also attributed in part to climate change. 4. In July of 2006 heat waves contributed to the deaths of at least 225 people in North America. 5.

Warmer temperatures could increase the probability of drought 6. Warmer temperatures increase the energy of the climatic system and can lead to heavier rainfall in some areas. Signpost and transition: Now that you know what effects Global Warming is having on our weather I will be telling you about how it will affect our animals. II. Main Point: The reason for animal extinction is because our animals can’t adapt to rising climate changes. A. These are some of the facts (nrdc. org, 2008) 1. The predicted range of climate change by 2050 will place 15 to 35 percent of the 1,103 species studied at risk of extinction. . Increasing global temperatures are expected to disrupt ecosystems, pushing to extinction those species that cannot adapt. 3. Some polar bears are drowning because they have to swim longer distances to reach ice floes. B. Global Warming will drive our animals into extinction Signpost and transition: The final aspect of Global Warming that I will be talking about is the effect it will have on our future. III. Main Point: Our future is in for a drastic change from what we call normal today. A. Rising sea levels could flood many South Seas islands and swamp large parts of Southeast Asia.

B. Researchers predict the earth’s temperature may rise to an additional 5 or up to a drastic 12 degrees Fahrenheit. C. Warmer water in the oceans pumps more energy into tropical storms, making them stronger and potentially more destructive. D. Greater evaporation, particularly during summer and fall, could exacerbate drought conditions and increase the risk of wildfires. Transition: Let’s review what we learned today about Global Warming Conclusion: I. Summarize: The world is in store for a major change.

Rising temperatures are having major effects in several different areas and aspects of the world. An increase in more powerful tropical storms, wildfires, and rising water levels will change the world that we live in today. A. We should familiarize ourselves with what the effects of our everyday lives are having on our future. B. Are you contributing to the destruction of our future? C. Life as you know it will never be the same II. Close with impact: No matter how much you try to ignore Global Warming the earth as we know it is in a lot of trouble. 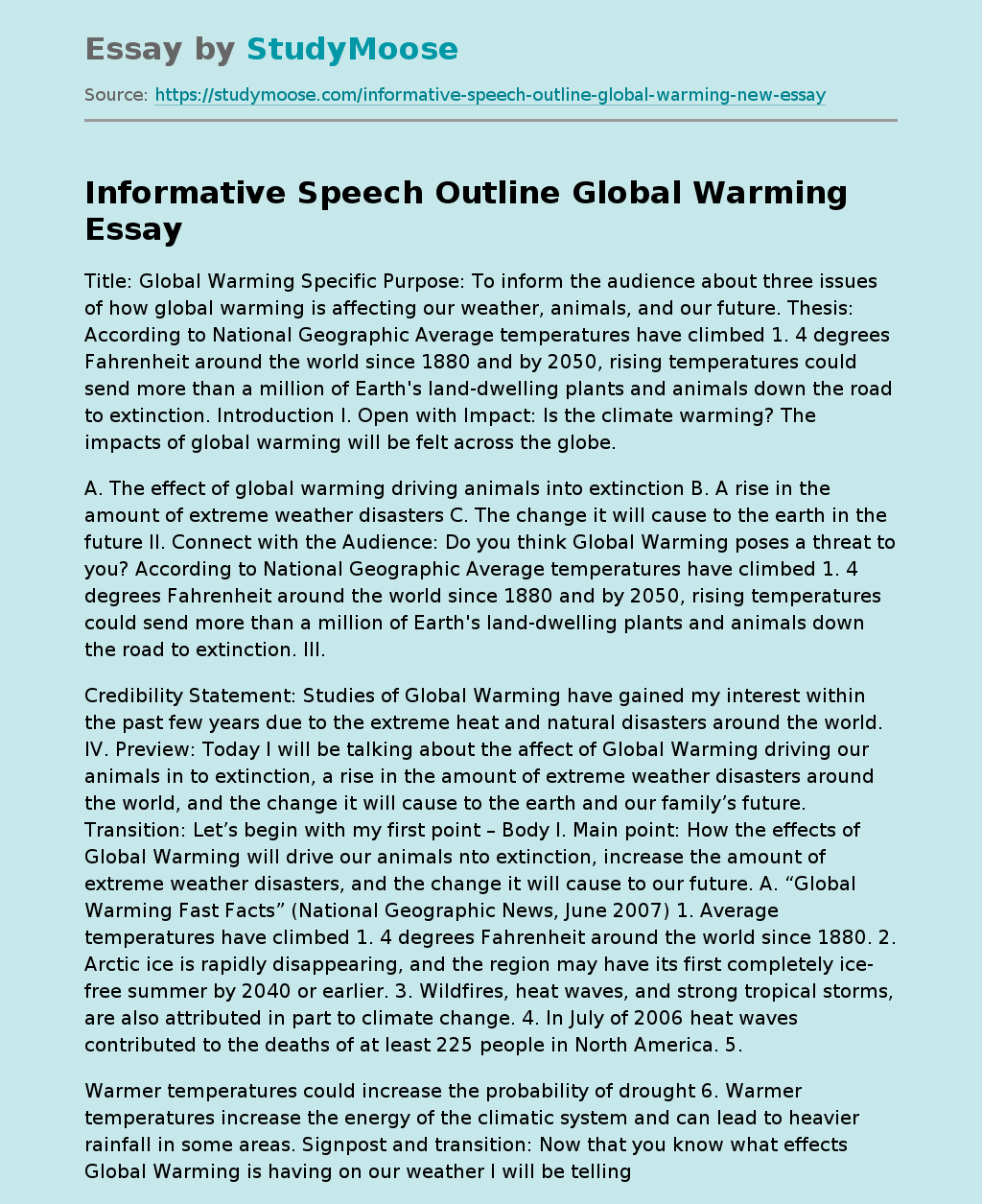