And The Band Played On

And The Band Played On, is a movie which tells the story of the beginning of AIDS (HIV disease). In the movie we are able to see first-hand the scientific and political aspect of the disease, as well as a few stories of those who died from the disease.

Right from the beginning of the movie, it can be inferred that Don Francis is a passionate man, and was greatly changed by his visit to Africa. Therefore, the passion with which he works to figure out how AIDS (HIV disease) works, is nothing unexpected.

Don't use plagiarized sources. Get your custom essay on
“ And The Band Played On ”
Get custom paper
NEW! smart matching with writer

And the ways in which he spreads his passion, for example when his outburst in the meeting with the blood bank industry leaders, shows again how much he truly cares. My personal opinion about his outburst is that he was right to speak up, to speak the truth, to speak exactly what needed to be said. While it was not very diplomatic of him to shout at them, Don is just such a passionate person that he could not contain himself.

After the outbreak, Jim told him that his little outburst had cost the CDC credibility and made them seem childish, which I can understand where he is coming from, as Jim was in charge of the political aspect of everything that came from the CDC. For Jim this probably caused him many problems, but regardless of any consequences, what Don said was true. The blood banks were too focused on making money and not about the care for their patients, they wanted to play the numbers game, claiming that the cost was too high and would only save a small number of people.

Don realized what was happening and called them out on it, to the point of humiliation almost.

The American governments stand on the issue of HIV/AIDS was honestly stupid as can be. While the disease was strictly in gay men, they felt no need to be involved. And when it did begin to spread to hemophiliacs, iv drug users, and anyone who received a blood transfusion with infected blood, they still sat on their butts and refused to move. They acted out of fear, making HIV/AIDS out to be something you could contract just by being near someone who had it.

Furthermore, the government and many others including some churches, viewed this as simply a moral issue. There were people claiming that this was God’s way of punishing these people for their inappropriate lifestyle. Because of this, the fact that disease began in only gay men, and the media termed it gay related immune deficiency, government simply felt no push to do anything. The only way for things to change was for other people besides gay men to get infected, or for straight people to speak up. Well of course people other than gay men began to become infected so they had to do something.

I firmly believe that had this disease either begun in heterosexuals or affected heterosexuals and homosexuals at the same rate, that the strides made to learn about the disease would have been doubled, even tripled. Government would have poured money into research on the disease, without even thinking about it because they would have been afraid of becoming infected themselves. When it first began, America thought it to be a gay only disease, that no one else could get it. But anyone can become infected.

My favorite character in the movie was without a doubt Don Francis. Just the way we see him evolve and change, from Africa to the CDC, and the fact that it seems the audience is the only one who knows exactly what Don saw in Africa and how much it haunts him. I think that is why he works so hard, he doesn’t want to be too late, like he was in Africa. His passion for his work encourages me and I hope to have the same passion for my work one day.

A character that I did not like so much was Robert Gallo. As an actor I believe Alan Alda was excellent, but the character he portrays makes my blood run cold from the moment he was introduced. Had it not been for him, HIV/AIDS research would have been so much faster, but because Gallo was more concerned about the profits and credit from the discovery of the virus, things were not as quick. Perhaps the reason Gallo cared more for money and was not as passionate about saving these people is because he, unlike Don Francis, did not have a life-changing moment in the story. Don saw the damage done by the ebola virus and therefore more than anything did not want to see the AIDS virus (HIV disease) become the same thing.

And The Band Played On. (2016, Mar 09). Retrieved from https://studymoose.com/and-the-band-played-on-essay 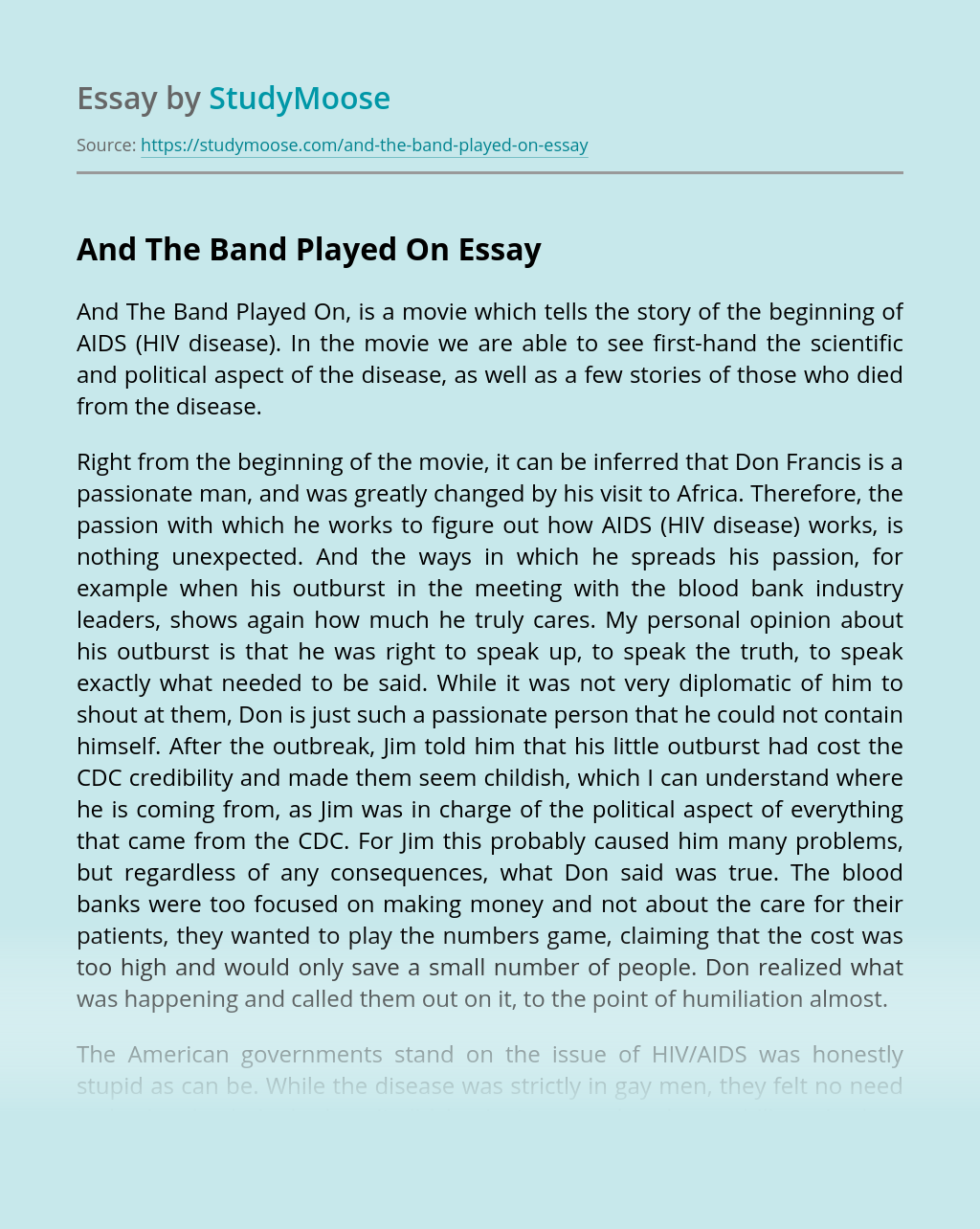