Don't use plagiarized sources. Get your custom essay on
“ HIV/AIDS Pandemic in Liberia ”
Get custom paper
NEW! smart matching with writer

In the same year, it was reported by Time Magazine that Liberia AIDS figures was put around 39,000 carriers2. These figures were supported and confirmed by UNAIDS. Although up to date, the NACP report shows that HIV/AIDS cases are substantially under-reported during prior years, in its Annual HIV and AIDS Review 2007-2008, it is reported that Liberia HIV positive population, based on the 2007 Antenatal Care (ANC) Sero Prevalence Survey, is 173,6193.

Currently, in its Quarter Nine Report (June to August 2009) a total of 1,411 patients4 are HIV/AIDS carriers; however, this figure is based on the number of persons consented for testing during the quarter.

Data for Bomi, Gbarpolu, Grand Kru and River Gee counties are excluded because information for these counties were not available at time of the review. Exhibit 1 provides a more detail pictorial view of the situation. The region has generally high levels of infection of both HIV-1 and HIV-2. The onset of the HIV epidemic in West Africa began in 1985 with reported cases in Cote d’Ivoire, Benin and Mali.

Nigeria, Burkina Faso, Ghana, Cameroon, Senegal and Liberia followed in 1986; Sierra Leone, Togo and Niger in 1987; Mauritiana in 1988; The Gambia, GuineaBissau, and Guinea in 1989; and finally Cape Verde in 1990. The HIV/AIDS epidemics spreading through the countries of Sub-Saharan Africa are highly varied. The main driver of infection in the region is commercial sex. Although it is not correct to speak of a single African epidemic, Africa is without doubt the region most affected by the virus. Inhabited by just over 12% of the world’s population, Africa is estimated to have more than 60% of the AIDS-infected population.

Much of the deadliness of the epidemic in Sub-Saharan Africa has to do with a deadly synergy between HIV and tuberculosis, though this synergy is by no means limited to Africa. In fact, tuberculosis is 2 A. History and Facts Time Magazine, 12 February 2001, Vol. 157, No. 6 Annual HIV and AIDS Review: 2007-2008; pp. 5 NACP HIV & AIDS QUARTER 9 REPORT: JUNE – AUGUST, 2009; pp. 7 3 4 Page 3 of 15 PDF created with pdfFactory Pro trial version www. pdffactory. com the world’s greatest infectious killer of women of reproductive age, and the leading cause of death among people with HIV/AIDS. 1.

Education ; Awareness Building The current figures about HIV/AIDS prevalence is a strong indication that stigmatization and discrimination remains a major constraint to comprehensive data gathering on the actual prevalence rate for Liberia. This means that many Liberians are not willing to go for counselling and testing. HIV prevention activities are key components in fighting the pandemic in Liberia. The NACP during the quarter continue to disseminate HIV prevention messages to increase awareness in the general population. These messages were disseminated through various medium including posters, brochures, calendar amongst others.

According to its annual report, a total of 29,3565 materials were distributed to health facilities, NGOs, CBOs, FBOs, and other implementing partners during the quarter. By a comparative analysis, given the last five years, with all of these awarenesses on HIV prevention, one can only hope that there will be a change in behavior of the population. Like one journalist reported in October 2005 said: “first the good news. Young Liberians know about AIDS, how they might contract the disease and what they can do to protect themselves. Now the bad news! They are not putting that knowledge into practice6. 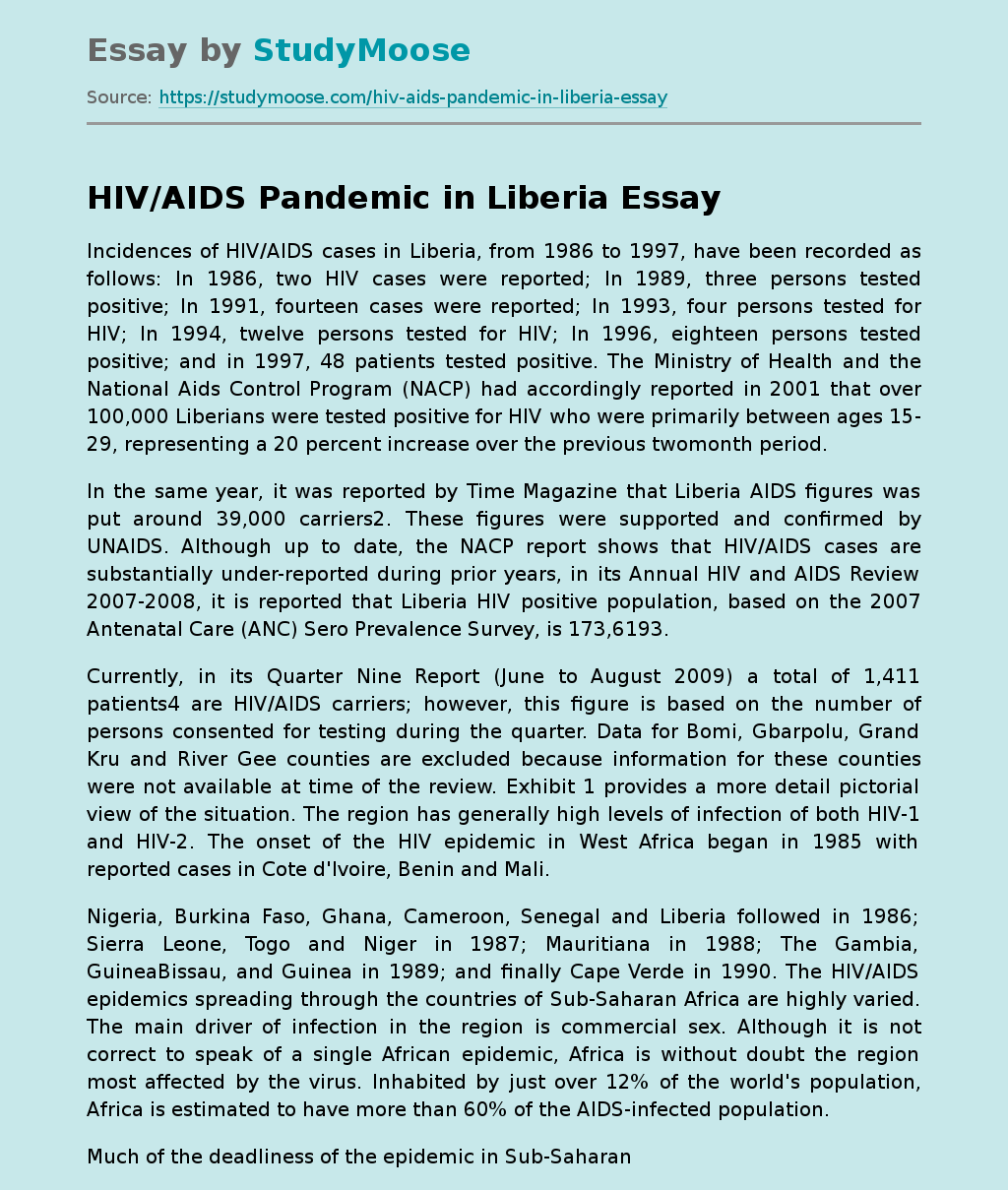