An Outline of Global Climate Change on Earth

There is no doubt that the accumulating evidence is suggesting that the Earth’s climate is continually changing in direct result because of human activity. The most important of which causes the release of greenhouse gases into the atmosphere from fossil fuels. A report from the United Nations’ Intergovernmental Panel on Climate Change (IPCC) estimated the Earth’s average land and sea surface temperature has increased by 0.6 Â± 0.2 degrees Celsius since the middle of the 19th century (“Climate Change 2014”). The largest parts of change have occurred after 1976.

Don't use plagiarized sources. Get your custom essay on
“ An Outline of Global Climate Change on Earth ”
Get custom paper
NEW! smart matching with writer

The temperature is not the only thing to change on Earth. The models of precipitation have also changed. The drier regions of Earth are becoming drier, meanwhile other areas are becoming wetter. In the regions where precipitation has surged there has been an unequal boost in the prevalence of the heaviest precipitation occurrences. Furthermore, the IPCC has concluded that if no specific actions are taken to decrease greenhouse gas emissions, the Earth’s temperatures will likely rise between 1.

4 and 5.8 âˆž C from 1990 to 2100 (“Findings of the IPCC”). These forecasts wind speed and precipitation are not as consistent, but they also suggest significant changes.

In general, humans are very accustomed to changing climatic conditions that vary on a daily, seasonal, or annual timescale. Increasing evidence suggests that in addition to this natural climate change, average climatic conditions measured over a period of thirty years or longer are also changing a lot more than the natural variations documented in the time periods of decades or centuries. As time is going on the understanding of these causes are becoming more and more understood.

Climatologists have compared climate model simulations of the effects of greenhouse gas emissions to that of the observed climate changes of the past. They have also evaluated the possible natural influences to include solar and volcanic activity. Climatologists have concluded that there is new and strong evidence that the majority of the global warming observed over the last fifty years is most likely to be attributable to human activities.

Global warming has been documented and observed in all continents with the largest temperature changes happening at the middle and high latitudes of the Northern Hemisphere. The miniscule amount of climatic change that has already occurred so far has had unmistakable effects on a large variety of natural ecosystems. Over the period 1948 to 2013, the average annual temperature in Canada has warmed by 1.6 Â°C (relative to the 1961-1990 average), a higher rate of warming than in most other regions of the world (“Impacts of Climate Change”). There are climate model simulations that have been used to estimate the effects of the Earth’s past, present, and future greenhouse gas emissions on climate changes. These models are based on the data of the heat confining properties of gases released into the atmosphere from man-made and natural sources. Also the measured climatic effects of other natural phenomena is used. The models used by the IPCC have been certified by testing their ability to explain climate changes that already happened in the Earth’s past. Generally, the models can give decent estimates of past patterns only when man-made emissions of non-greenhouse gas air pollutants are included to go with the natural phenomena. This underscores that the models show a good estimate of the climate system, natural fluctuations are important contributors to climatic changes even if they cannot sufficiently explain past trends on their own, and man-made greenhouse gas emissions are a vital contributor to climate patterns and are certainly likely to remain so going forward.

Correspondingly, human health is especially sensitive to temporal and geographical changes in weather and climate whether they be short term fluctuations or long term changes. Historically, weather has not been considered as subject to modification by human actions. Measures have been taken though to lessen human effects. Although adaptation is a very important factor of the health consequences of climate change, the effect of man-made greenhouse gas emissions on climate means that climate change can be considered a principle risk factor that could potentially be changed by human intervention with associated effects on the strain of disease.

Furthermore, the risk factor was characterized by current and future changes in global climate traceable to rising atmospheric concentrations of greenhouse gases. Compound climate scenarios are accepted instead of the desirable continuous measurements of individual climate changes because climate is a complex phenomenon that includes temperature, precipitation, wind speed, as well as other factors and therefore cannot be measured on a single scale. Climate variations will vary greatly with geography and time. These are not fully attained in global averages of climate changes and all forms of climate are likely to be mutated by greenhouse gas levels in the atmosphere.

Despite the mounting evidence of these global changes, humans need to determine what can be done to mitigate or eliminate these changes. Scientists say that to mitigate the human input to global climate change, humans should reduce carbon dioxide and other greenhouse gas emissions. Although some additional warming is unavoidable, or even if we achieve significant greenhouse gas reductions hastily, we should still make arrangements to adapt to the coming climate change. If we are unable to control emissions or adapt to these inevitable changes quickly enough, a carefully selected geoengineering plan could perhaps give an emergency substitute to slow global climate change. As of yet several of the strategies being considered are very risky and unproven.

However, controlling these emissions is a huge, difficult, and potentially expensive problem that not a single strategy will or can solve. On the other hand, the price of unchecked global climate change will probably be very significant. Many economists have determined that putting existing scientific and technological strategies into motion and creating new ones may stimulate the economy and would also create significant near-term perks in public health through the reduction of air pollution.

The Carbon Mitigation Initiative, which is an industry and university agreement based at Princeton University, has determined strategies, based exclusively on existing technologies used in combination over the next fifty years, would keep most of the carbon dioxide in the atmosphere from possibly doubling the pre-industrial level. Of course there are big numbers of scientists who agree that doubled carbon dioxide levels will certainly create a disastrous issue with the climate. These strategies include: decreasing use by traveling fewer miles each year and adjusting thermostats while increasing the energy efficiency of plants, vehicles, and buildings; capturing the carbon expended by plants and place it in underground storage; creating more energy from the natural gas, nuclear, and renewable fuels that include wind, solar, bio-fuels, and hydroelectric; cease the soil degradation and deforestation throughout the world, while at the same time reforesting areas.

Moreover, some of these strategies will have to be put into place not only by individuals on their own but also governments and industry. On average, Americans emit nineteen tons of carbon dioxide every year while driving vehicles and heating their places of residence. That is more than people in any other country in the world. Even a five percent reduction of individual emissions would equate to U.S. emissions dropping by 300 million tons each year. That reduction would be easily attainable by replacing appliances and light bulbs with ones that were far more efficient, planning out automobile trips more carefully, driving vehicles that are more fuel-efficient, taking fewer flights, and the list goes on. Of the carbon dioxide emitted from human activities in a year, about half is removed from the atmosphere by natural processes within a century, but around 20% continues to circulate and to affect atmospheric concentrations for thousands of years (“National Climate Assessment.”). By learning and communicating about global warming with other citizens and elected officials to talk about the problem and by making energy efficient decisions, people will play a decisive role in what certainly has to be a global effort to respond to global climate change.

Similarly, humans must adapt to climate change. The climate of Earth has been fluctuating throughout its history. Recently, humans have become one of the major factors contributing to this global climate change. The changes connected to human activity are already being sensed. Climate change in not avoidable because of the emissions that have already been expended into the atmosphere, even if all greenhouse gas emissions were stopped today. For this reason, many governments and industries are starting to adopt policies, create disaster response plans, or alter infrastructure to prepare for these expected changes. While some changes are difficult and expensive, many are rather inexpensive and offer immediate benefits.

Of course adaptation strategies will differ depending on the biggest threat posed by climate change from country to country. For example, in the coastal regions might get rid of their incentives to try to create coastlines and to try to create a safe zone of forest and sand dunes in between infrastructure and the water. New York City has previously mixed climate change into its planning process of future development, reducing the need for costly retrofitting later.

Furthermore, local governments can alter disaster response plans to furnish changes in weather patterns. For example, to mitigate the health impact of heat waves on the people, Philadelphia set up an emergency response plan. Because of this, the plan they created has already lowered fatalities from heat related symptoms, according to Philadelphia officials. More severe and expensive changes may become necessary in some places. Thawing permafrost, heightened storms, higher winds, and the erosion of the coast are now putting communities at risk in Alaska. Trying to move each community to safer areas would not be feasible as the costs would be too great although some communities have decided to relocate.

Lastly, to understand and accept the dangers of climate change, businesses, people, and governments need knowledge and understanding to adapt to climate change and determine the long term and immediate benefits and disadvantages of those adaptation strategies. The most benefits relative to the risk and cost lie in carrying out these changes.

With all of the information that is now out there, it is clear that there is global climate change and that it needs to be addressed. Not just in a local area, but on a global scale. These issues are going to have to be dealt with for many years to come as long as humans inhabit the planet. Only time will show how humans adapt to these changes and what effect they will have on planet Earth.

An Outline of Global Climate Change on Earth. (2019, Aug 19). Retrieved from https://studymoose.com/an-outline-of-global-climate-change-on-earth-essay 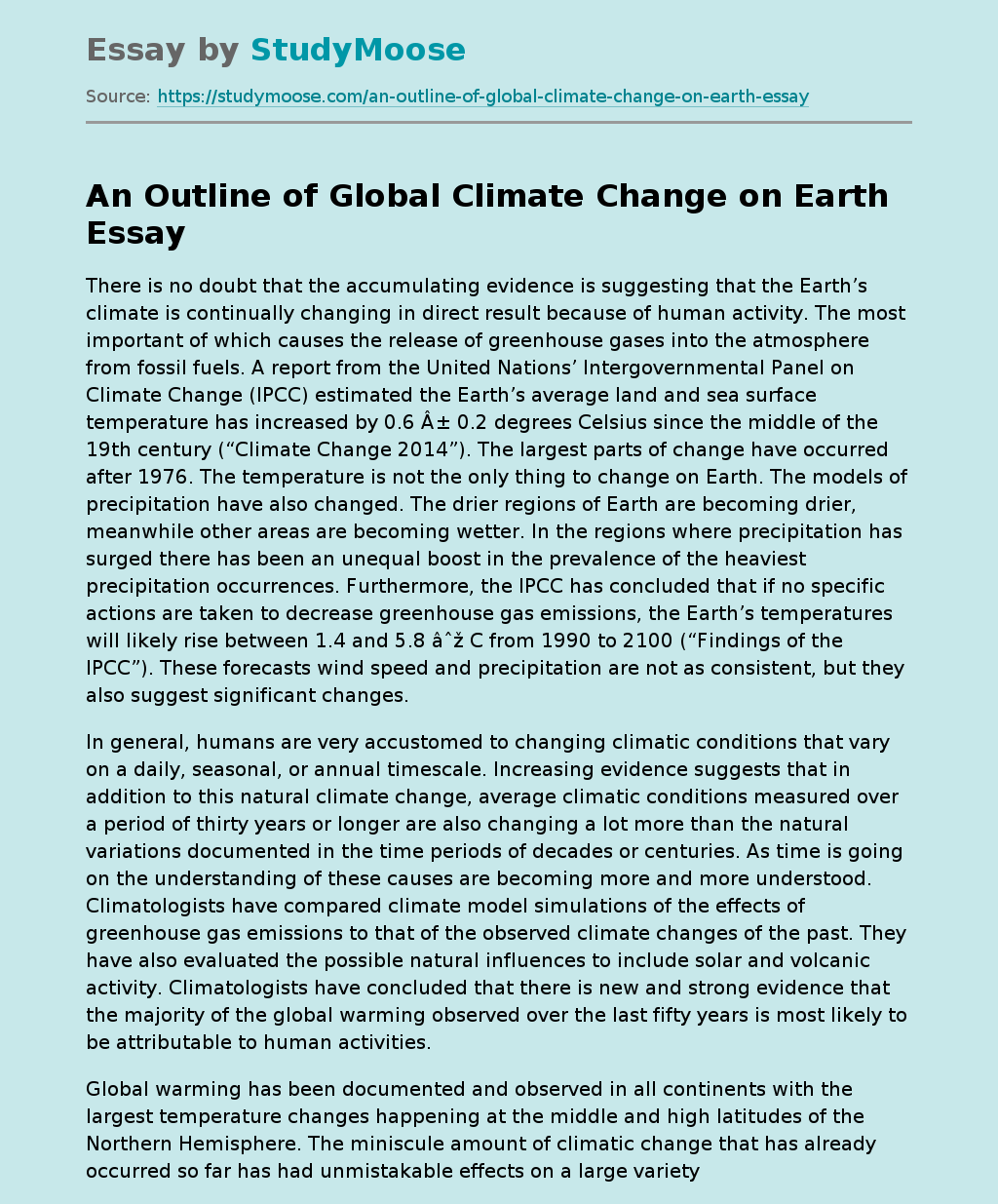