Don't use plagiarized sources. Get your custom essay on
“ Impact Of Climate Change And Possible Solutions Environmental Sciences ”
Get custom paper
NEW! smart matching with writer

Life is a definite flow of events. Mistimed events are not welcome in human lives. Mistimed events occurring in a very high frequency are immensely dangerous. Climate is the regular behavior of temperature, precipitation, humidity, atmospheric pressure and other related environmental factors.

Climate change is a stark reality. A study in [1] states that ice loss in arctic region between 1979 and 2003 is larger than the area of the states Texas, California and Maryland combined. For long, climate change was a prediction but a series of natural disasters like Tsunami, floods and wildfires point directly to climate change. Let us examine some damage caused by climate change.

Climate change has been associated with historical collapses of heritage sites like Harappa, Ancient Egypt and Maya civilization.

Sourcewatch reports that Bombay, an Indian city, received 37 inches rain due to global warming [8]. Global warming was attributed as the reason for the hurricane Katrina in 2005. Recent inconclusive reports have surfaced that global warming might be the culprit behind Leh cloudburst this August [9]. It is a well-known fact that the lack of mangrove forests in the coastline in south-Asia has increased the effect of Tsunami in December 2004. Sourcewatch also reports deaths caused by heat wave in Arizona in 2005, two-foot snowfall in Los Angeles in November 2004, 124 mph winds in Scandinavia leading to electricity loss and disruption, drought in Midwest in August 2005 and attributes global warming as the reason for these incidents. Significant awareness drive has begun following such events with political commentators and activists at the helm. A report by Intergovernmental Panel on Climate Change headed by RK Pachauri predicted a 7-23 inch increase in sea levels in 2010 due to climate change [10]. Another report at University of Washington by Climate Impacts Group reports 1.5° F increase in temperature in Pacific Northwest in 20th century.

Nature has, in its own way, contributed to the cause of climate change by regular adaptations. A natural disaster like volcano releases toxic gases such as sulphur-dioxide apart from water vapor, dust and ash. The released sulphur-dioxide gets accumulated in the topmost layer of atmosphere. The released substances also obstruct sunlight from entering earth’s surface leading to earth cooling. The formed water combines with the toxic gas to result in sulphuric acid that hangs around the topmost layer of atmosphere. These have the capability to block sunlight and disrupt regular processes leading to eco-imbalance. Part of the climate change is attributed to continental drift as it changes the physical features of the land area, their location and location of water, eventually tidal currents.

If nature changes the climate unintentionally, humans have multiplied the climate change effect by several notches. Industrial revolution, over-usage of resources, inefficient resource handling can be attributed to human -influential causes of climate change. This also includes greenhouse emission gases and burning of fossil fuels like oil, coal, natural gas. Excessive emission from industries has polluted the atmosphere to great levels. It is not surprising to note that developed countries contribute the maximum to atmospheric pollution through carbon emissions. Ten of the top countries in the world contribute 67% of carbon emissions [3]. However, it is the poor of the world who bear the maximum brunt due to this.

A report by mongabay reveals that more than one million square kilometers of forest land was lost between 2000 and 2005 [2]. It is a well-known fact that trees absorb carbon-dioxide emitted by vehicles and industries. Hence, we should introspect the findings of the report to estimate the amount of unabsorbed carbon-dioxide and other toxic gases.

Let us consider the case of highly developed and industrialized country, the United States to estimate the impact of climate change in near future.

Water cycle is affected to the extent of influencing the availability of water as a resource. As a result, floods and droughts become more frequent. Varying climate is bound to change surface water quality and groundwater quality. All this can be contributed to increasing water temperatures, decrease in ice per area, fluctuations in precipitation occurrence, transformations in soil moisture and high concentration of water vapor in atmosphere.

Increased irregular floods will impact the transportation sector given the disruption caused to infrastructure. Evacuation and rehabilitation of people, infrastructure damage are the evident results of disruption by floods.

Agriculture in the United States contributes 8.6% of total greenhouse gas emissions. Gases like carbon-dioxide, methane and nitrous oxide directly affect agriculture. Recent wildfires in Russia resulted in crop loss given a high increase in atmospheric temperature. Many have pointed this to observable global warming [4]. Another report reveals that South Africa is bound to lose 30% of its maize crop by 2030 [5].

It cannot be ignored that many living species depend on climate for their survival. We are witnessing reports predicting extinction of polar bears if current ice melting continues in the Arctic region and extinction of variety of other species due to changing temperatures and climate as a whole. Heavy investment in drylands reveals the importance to turn these lands into fertile lands [6]. The effect of Tsunami that occurred in south-Asia in 2005 increased multifold due to deforestation of mangrove forests along the coastline. Mangrove trees have the capability to absorb tsunami waves but were uprooted to promote aquaculture.

Increasing temperatures already cause many heat-related deaths in India. Each summer in India many die due to high temperatures and each year are getting hotter with time. Irregular temperature changes lead to health imbalance, across any age group. Infections caused due to air pollutants are bound to leave their mark on humans.

Every individual living on this planet is responsible for global warming in one way or another and must amend ways to stop this phenomenon in his/her own way. United Nations Framework Convention on Climate Change (UNFCCC) is a common framework in which Kyoto protocol is proposed to fight global warming. 187 countries signed the protocol till November 2009. Kyoto protocol was introduced in 1997 but was enforced from February 2005. The main objective of the protocol is to reduce greenhouse gas emissions by 5.2% by 2012 from 1990 levels. Another solution for climate aims to reduce carbon emissions by 40% by 2020. Solutions include

Reducing water usage in daily activities saves good amount of energy. Using public transportation such as trains and buses preserves energy. [11] suggest rural renewable energy strategies like using hydropower or biogas for lighting and energy purposes instead of candles or kerosene. Similarly, hydropower or biogas can be used for communications instead of batteries. Solar cookers can be developed and used instead of burning wood for cooking to achieve over 25% efficiency. Solar PV pumps or mechanical wind pumps can be used to pump water instead of diesel pumps and generators.

Another recommendable solution is saving energy on computers by turning on the save screen mode which reduces power consumption and emissions. It might sound trivial but small amounts of saved energy add up to huge amounts at the end of the year.

A greater resolve is needed on behalf of all world countries to stand by the promises made to reduce carbon emissions to achieve our objectives by the target, 2020. Countries must work towards the common goal of reducing greenhouse gas emissions and must also abide by frameworks such as Kyoto protocol aimed at reducing global warming. Also, reducing global warming and addressing climate change is the responsibility of not only governments but also its citizens, of each and every individual’s. We should collectively work to save energy by reducing unnecessary water usage, saving electricity, using public transport, recycling plastic, bottles, paper and waste. 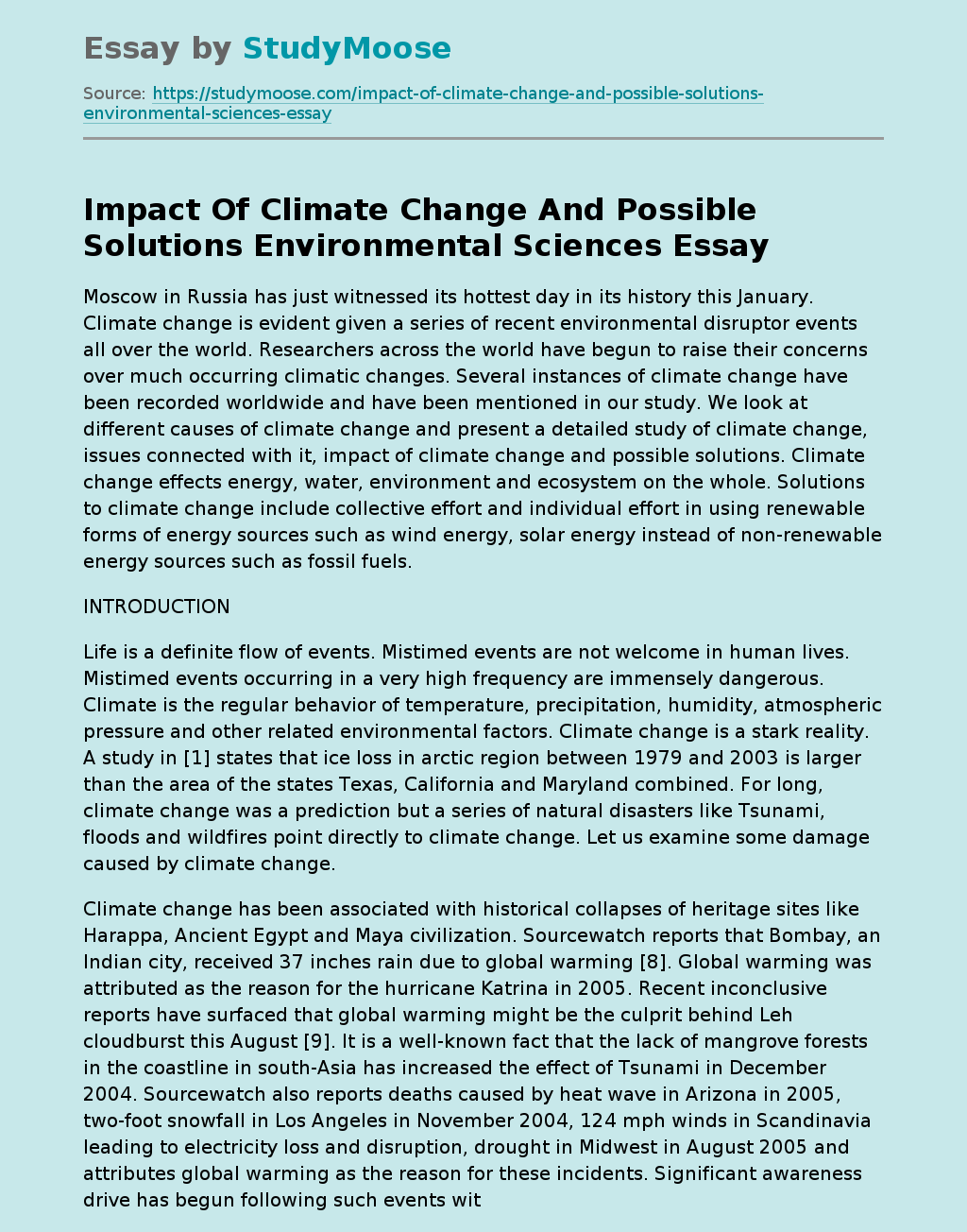