At the beginning of the 21st century people started to realize that fossil fuels are not renewable and they are consumed too quickly so people believe that there will not be a source for future generations. Activists try to tell people about the consequences of lack of energy in terms of economy or environment, so consciousness of the situation increases each day with the help of activists. However, the public and also the government do not do anything to amend this situation.

Don't use plagiarized sources. Get your custom essay on
“ Can Alternative Energy Replace Fossil Fuels An Environmental Sciences ”
Get custom paper
NEW! smart matching with writer

Professor Emeritus of History, Geography, and American Studies at the University of Texas, Alfred W. Crosby asserts that Alternative sources of energy can become a satisfactory substitute for fossil fuels such as coal, oil, petroleum and diesel if we put as much effort and genius in the effort as we did in producing the first atomic bomb(“alternativeenergy.procon.org” , para 3). However some others believe that alternative energy cannot meet our need sufficiently. Also it’s hard to find a suitable place and the high technology to build this kind of structure.

Proficient in: Energy And Environment

There are both pros and cons about using alternative energy which makes it difficult to find the most reliable way, however considering all these various approaches, we can conclude that fossil fuels are more harmful.

There are many type of carbon based source which contain huge amount of energy such as coal, oil, natural gas. They are most common source to create energy. Especially in Turkey almost all energy comes from fossil fuels (%99.6). There are some specific places to produce such as Zonguldak for coal or Batman for oil.

Underground coal mining sector very taught because working condition is disaster but, people have to work this job because of unemployment. However coal mining have enormous dangerous for health because it cause lung disease. Also cause deaths due to underground coal-mining accidents have been recorded officially since 1941, and a total of 3094 deaths were reported between 1941 and 2003(Kucuker,1). Although this kind of evidence, both government and companies not take any precaution about disasters. Almost the same situation happens in Batman which has most of oil source in Turkey. Some worker suffer from similar problem like health and condition, because they do not know their right in terms of both health and safety even if they are aware of their right companies employ worker on daily-bases so they can not seek their right consequently companies exploit worker easily.

In the beginning of industrial age, countries used fossil fuels for their own development without thought about its effect on people and the environment. They also ignored pollution and damage to the environment but this careless behaviour has caused irreversible consequences such as greenhouse effect of burning fossil fuels traps the concentration of carbon dioxide so this also increase heat as a result global warming occur. Therefore people should work together to establish non-governmental organizations to prevent violation and unnecessary usage, because the world supply will not be enough for the next generation. Professor of Massachusetts Institute of Technology, M. S. Dresselhaus also emphasised that fossil fuels currently supply most of the world’s energy needs, world reserves of oil are about 1.61014 (11012 barrels). World consumption is about 1.21010 a day. World reserves of natural gas are about 1.41014 m3; gross production of gas is about 2.41012 m3 per year. World coal reserves are about 9.11011 tonnes; annual consumption is about 4.5109 tonnes per year. However unacceptable their long-term consequence, he assert that the supplies are likely to remain adequate for the next few generations. Scientists and policy makers must make use of this period of grace to assess alternative sources of energy and determine what is scientifically possible, environmentally acceptable and technologically promising. Briefly fossil fuels such as coal, oil, natural gas, nuclear power supply most of the world’s energy needs in today world but they are not adequate for future generation without alternative energy.

The world has many alternative energy sources such as wind, solar, geothermal, hydroelectric, and bio fuels are possible energy type which can replace fossil fuels. Like fossil fuels these energy types have several advantages and disadvantages. Wind and solar power cause no pollution and are renewable and also wind and solar power are free. The only cost of solar and wind power is the installation and construction of the structure. Nevertheless, both wind and solar energy is inconsistent. It means wind intensity or sunny weather can change. Moreover geothermal energy built upon steam power so they drill holes in the steamy area and steam caused shoot up and drive turbines. Geothermal central should build correctly otherwise harmful gases and mineral can be released. Furthermore, hydroelectric central work with the help of accumulation of water so energy production is constant. However construction of dam is very expensive and sometimes especially in Turkey dam can damage historical place like Hasankeyf in the east of Turkey. Lastly like wind and solar power bio fuels is renewable. Ethanol is the main element of creating energy which is made from corn. It decreases the usage of gas but cost of conversion very expensive.

In addition, Some countries realize the variety of alternative energy and pay attention to these. Spain and Germany are very serious about creating alternative energy. They use many kind of alternative energy but lost of countries just use hydroelectrical energy in the name of alternative energy. However they do not realize that for example solar energy more powerful than hydroelectrical energy. Dieter Eissel assert that the sun radiates 174 peta-watts (PW). Of this, about 30 percent is re¬‚ected back to space, while the rest is absorbed by atmosphere, clouds, oceans and land masses. The total volume of radiation absorbed by oceans and lands reaches up to 89 PW. Therefore, solar energy can provide 2,850 times more energy than current world demand. In comparison, the multiple for hydro power is 3, 5 for geothermal, 20 for biomass, and 200 for wind energy (Fischedick, 2000). This means that all nations need the solar radiation of just one day to meet their energy demands for a whole year. However, settle that kind of energy source is very expensive and little utopian. Nevertheless still reducing fossil fuels help prevent the pollution. According to one of the most comprehensive plans for future sustainable energy provision launched in June 2010 by Greenpeace and the European Renewable Energy Council (EREC), a sustainable ‘World Energy Outlook’ provides a detailed practical blueprint for cutting carbon emissions while achieving economic growth by replacing fossil fuels with renewable energy and energy efficiency (Eissel, 4).

Also, there are some kinds of energy types which are related to fossil fuels but not that much harm such as natural gas and nuclear power. Natural gas release methane gas instead of carbon dioxide and methane gas does not cause greenhouse effect it increases the amount of natural gas reserves a little bit higher than fossil fuels. Nuclear power creates a huge amount of energy however risk also very high because if plants accidentally release something its damage may be catasrophic. In the end although fossil fuels have the possibility of least harm to the environment is still a risk. Therefore alternative energy must be encouraged by government and the public. Otherwise countries will start to fight each other because of lack of resource of fossil fuel in fact they already start to fight as resource become limited and countries may occupy an oil-rich country under the name of “peace” or some unethical reason to take control of oil-reserves.

On the other hand, some people claim that the world has enough fossil fuel supplies for at least 2-3 decades. They think that this issue not of great urgency. At the same time they believe alternative energy is not sufficient and enough to meet people’s needs. To exemplify, gas is much more efficient than electrical energy and also filling the car’s petrol tank quicker than charging an electrical car. Critics also state that wind power or solar power is not easy to construct everywhere. They can only be built in a suitable place to be efficient. For instance wind turbines must be built in a windy area to create energy, this means where wind turbines can be constructed is a little restricted. Likewise solar energy is useful in countries which have many hours of direct sunlight. In this situations, as the cost of construction increase also the efficiency decrease.

Taking all these points into consideration, we can arrive at the conclusion that alternative energy should be a convenient energy source for future generation, because there is no other option for future generation nobody can claim that fossil fuels will last forever, this generation should regulate the usage alternative energy and also pay attention to the environment. Otherwise fossil fuel become most valuable things in the world and lots of people not allow or afford to benefit from it. 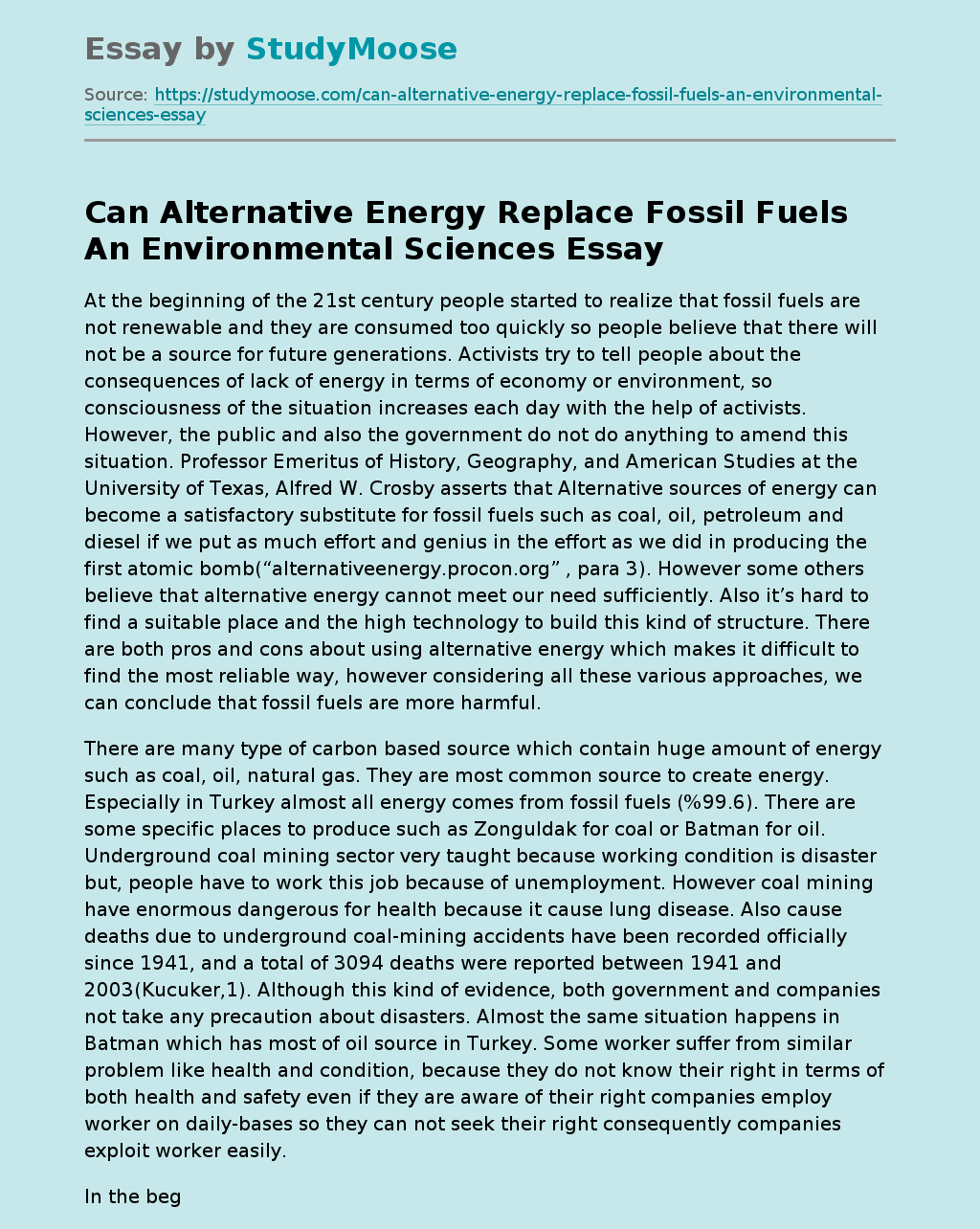