Bio fuels essay. Biofuels are Fuels made from Biomass

Biofuels are made from plants,animals, or their waste products. Here I have listed three examples of biofuels beneath.

1 Micro-organisms decompose waste materials to produce biogas. 2 Biogas is usually about 70% methane and somewhere between 20 and 30 % carbon dioxide 3 the way we use it to generate energy is to burn it to heat up water which will then turn a turbine to produce electricity. It is also heard of to heat the water to steam which then can be used straight into central heating systems.

Don't use plagiarized sources. Get your custom essay on
“ Bio fuels essay. Biofuels are Fuels made from Biomass ”
Get custom paper
NEW! smart matching with writer

4 It can also be used as fuel for transportation such as specially designed cars with engines that run on biogas.

1 Biodiesel is an alternative fuel, similar to regular diesel, which can be used in vehicles- there is a benefit of using biodiesel in vehicles and that is you don’t need to alter the vehicle very much for it to be able to run on biodiesel. 2 Biodiesel is made from vegetable oils or animal fat

1 Ethanol can be burnt as fuel.

It’s a cleaner fuel than petrol or diesel, producing fewer pollutants. 2 Ethanol is produced by using yeast to ferment glucose. Materials like sugar cane, barley and corn can be used as a source of glucose in ethanol production 3 cars can be adapted to run on a mixture of both normal oil petrol and ethanol. This mixture is known and sold as gasohol

Biofuels are a ‘Greener’ Alternative to fossil fuels one main advantage that biofuels has over normal fossil fuels is that they are a sustainable source or energy.

The plants which are used to make all the different types of biofuels can be replace quickly and easily by planting new crops-so this means they’re a renewable energy source . In contrast, there is a finite supply of fossil fuels like coal and crude oil. These fossil fuels will run out eventually and the planet will need to use another efficient source of energy.

The plants grown to make biofuels photosynthesise,this means they remove CO2 from the the atmosphere. This balances out the release of CO2 from the burning biofuels. Overall using biofuels doesn’t release as much CO2 into the atmosphere as burning normal fossil fuels. This is hugely beneficial as carbon dioxide is a greenhouse gas which is contributing to global warming.

Another advantage of using biofuels over fossil fuels is that it doesn’t produce significant amounts of sulphur dioxide, which can cause acid rain. If acid rain was to occur it would damage the plants that produce the biofuels.

However there are disadvantages of using biofuels. To produce the plants it takes up a large amount of land. This means there will be less land for growing crops for food, this could be a problem in the future as due to rising population we need more food to feed more people. But we also need more energy for people to live in houses. If biofuels do become the next big energy source careful management of land growth will have to be used.

The last problem with biofuels id that society today is dependant on fossil fuels and in order to change facilities to run on on biofuels will cost mone and will take a long time to do.

Bio fuels essay. Biofuels are Fuels made from Biomass. (2016, Apr 16). Retrieved from https://studymoose.com/bio-fuels-essay-biofuels-are-fuels-made-from-biomass-essay 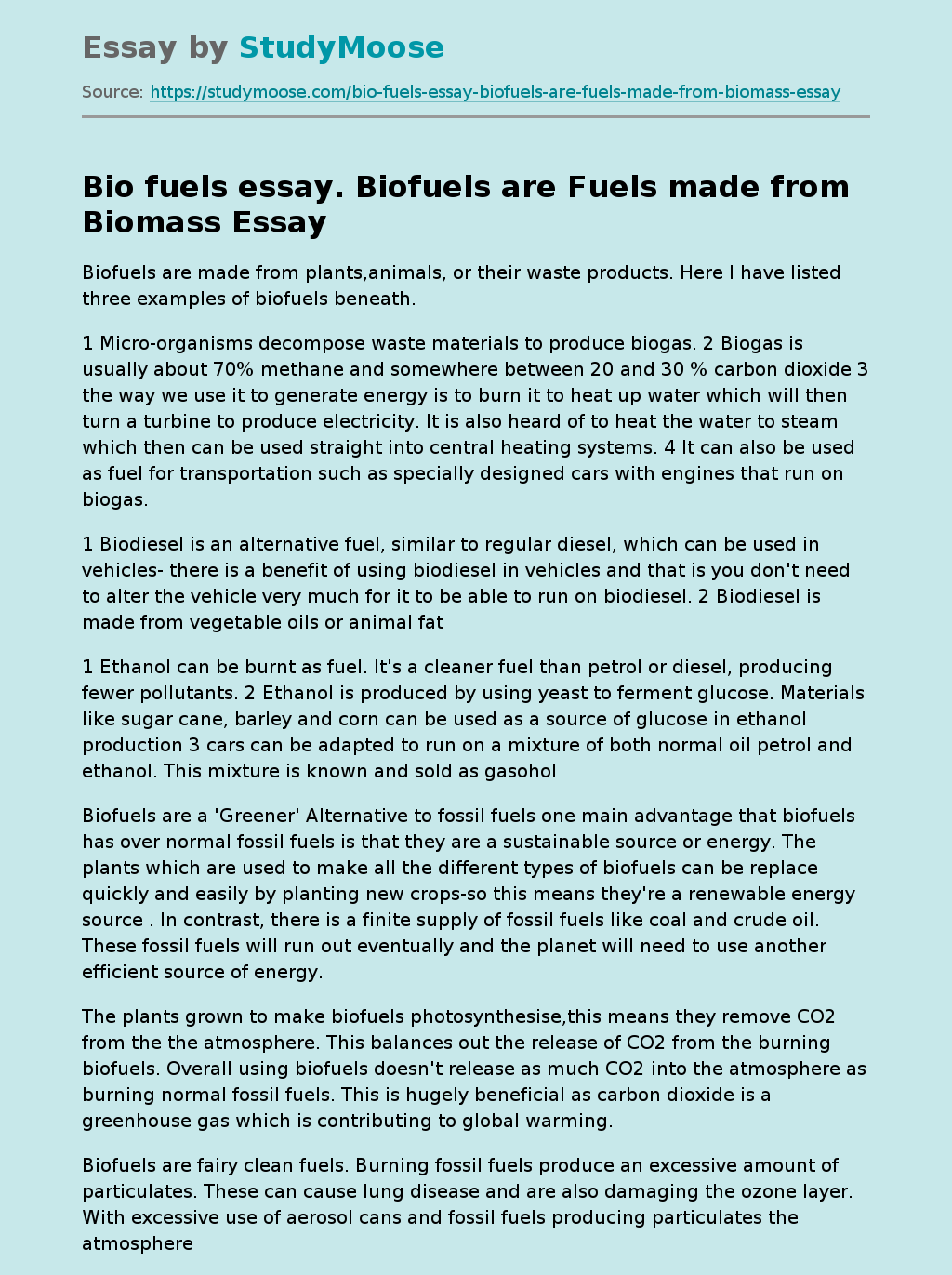