With the development of technology, more and more robots are used in various fields, especially in some areas that dangerous for humans. Many people hold the opinion that robots will replace humans in the future.

On the other hand, other people have a conflicting view that robots can’t do many of the jobs that humans do today because robots only repeat the same task all the time and have no ability to think. I totally agree that robots can’t replace humans.

Turn in your highest-quality paper
Get a qualified writer to help you with
“ Robots Can’t Replace Human ”
Get high-quality paper
NEW! AI matching with writer

This argument is worth discussing again and again, and my opinion will be further strengthened in the following discussions. As we know, robots have more advantages that over humans in many aspects. Many people like Farhad Manjioo, who wrote an article “Will Robots Steal Your Job?”, state that robots have a tendency to replace humans. Robots can perform jobs nonstop, which is good for a company to reduce costs. Also, robots will never ask for health or retirement benefits, so hiring a robot is much cheaper than hiring a human.

Robots can learn something rapidly because they just depend on the program in software.

Compared to robots, humans need to spend a long time to get some skills. For example, in the future, robotic lawyers might be able to do jobs faster and cheaper; in contrast, people have to take more than 3 years in law school, but eventually they might not do better than robots. It seems convincing that because robots have more abilities than humans that they will do more jobs than human in the future. However, for many jobs that are complex, robots are still not flexible enough to deal with the real world. Even if robots can perform some jobs better than humans, those jobs are repetitive and very simple tasks. Robots have no ability to think.

For example, Toyota, a famous car company, has embraced automation and replaced human with robots for years. However, they have strong evidence that hiring human can reduce waste in crankshaft production by 10%, which also helped shorten the production line. As we know, robots only repeat the same task all the time, but for car makers, they need staff who have more skills that can understand the whole production line. People have insight into process design and can hand on all the process for a car, which is something robots can’t do. Facing some complex jobs, robots are too limited to do tasks. In conclusion, I think humans will not be replaced by robots in the future. Most jobs in the world like teaching depend on personal experience. It is difficult for robots to make judgments. Humans have more skills that are not limited to a few areas. 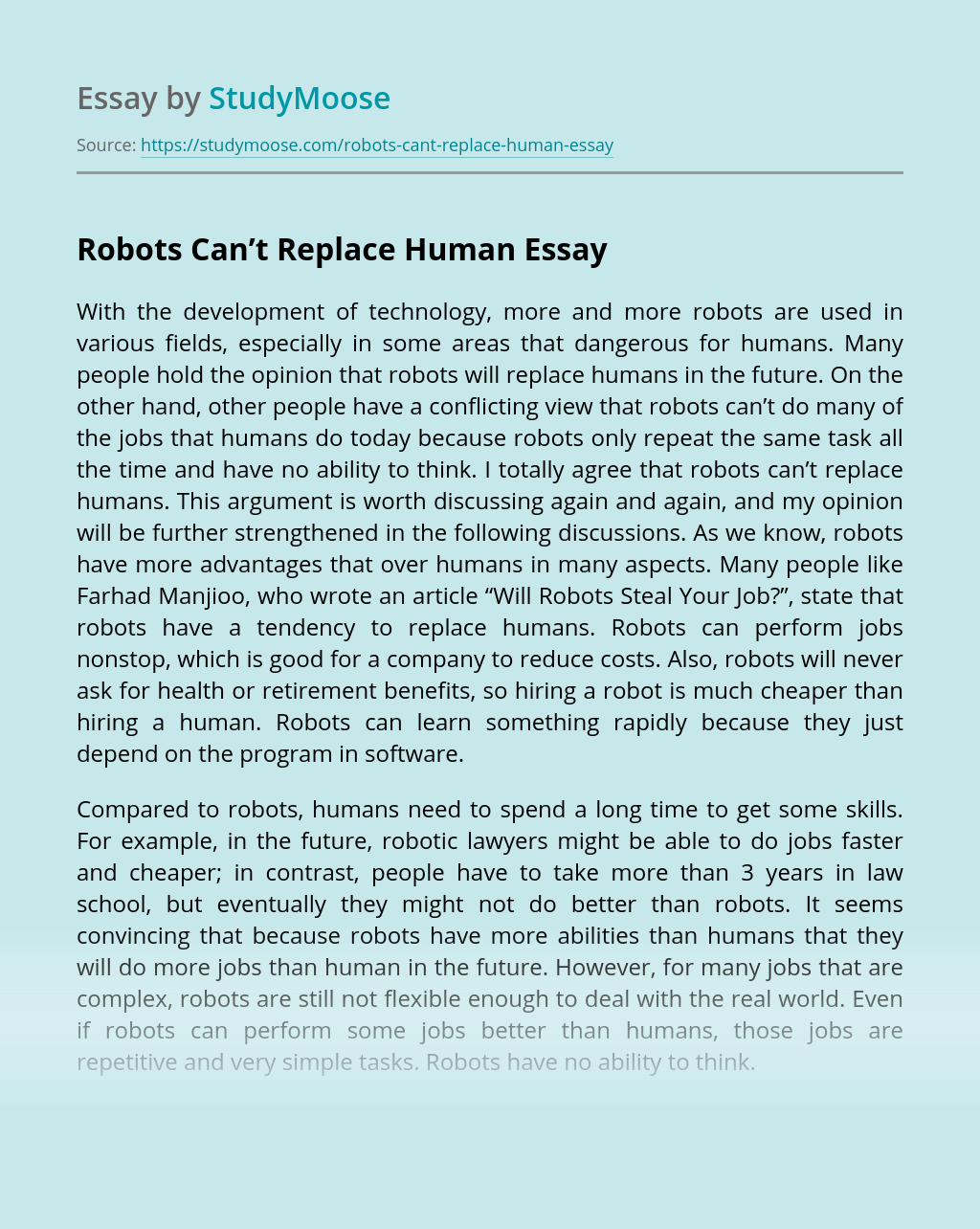 Turn in your highest-quality paper
Get a qualified writer to help you with
“ Robots Can’t Replace Human ”
Get high-quality paper
Helping students since 2015
Stay Safe, Stay Original