The Use of Robots/Robotics in Industry

Robots are the machines that are able to perform tasks previously performed by humans.  These machines work automatically. Robots are usually used to perform those tasks that require repetition over and over, are difficult and dangerous for people. Robots are used in variety of industries. They can perform different tasks such as assembly, welding, spray painting, drilling and packaging (Lamb & Johnson, 2001). Robotics is a very important technology that has greatly affected the manufacturing segments and economic operations throughout all the industries in the world.

Turn in your highest-quality paper
Get a qualified writer to help you with
“ The Use of Robots/Robotics in Industry ”
Get high-quality paper
NEW! AI matching with writers

The United States of American has been one of the main leading countries regarding the use of robotics in industrial section since four decades. The United States of America is the pioneer of robotics technology. The robotic technology was brought to market for the first time in the early years of 1960s. Now Japan is producing more and more robots with newer innovations and uses. The maximum number of robots are produced and exported by Japan nowadays.

There are a number of uses of robots in industries. Some of them are given below:

Industrial welding is the most popular and the first application of robots. Robots are used to perform repeated welding task to give uniform quality at very high speed.

Spray painting is another popular and important use of robots. No paint is wasted as robots paint and the work shows great quality due to the ability of robots to perform repeated and consistent tasks. The robots that are specially designed for spray painting save time, cut costs, show increased quality and relief humans for a hazardous job.

When robots are properly designed and planned then they become able to perform assembly tasks that require repetition. As they are able to repeat a task to a larger extent, they are used in electronic assembly too.

Japan entered in the manufacturing of robots almost a decade after the manufacturing of robots in the United States. But the growth of robotics industry in Japan was more rapid than the United States. The robotics industry in Japan had grown to significant extent in the 1980s. The sales of robots had increased 10 times during 1980s (Robotic Industries Association, 2002).

Demands of Robots in Market

Structure of Robotics Industry in the United States and Japan

The Use of Robots/Robotics in Industry. (2017, Mar 20). Retrieved from http://studymoose.com/the-use-of-robotsrobotics-in-industry-essay 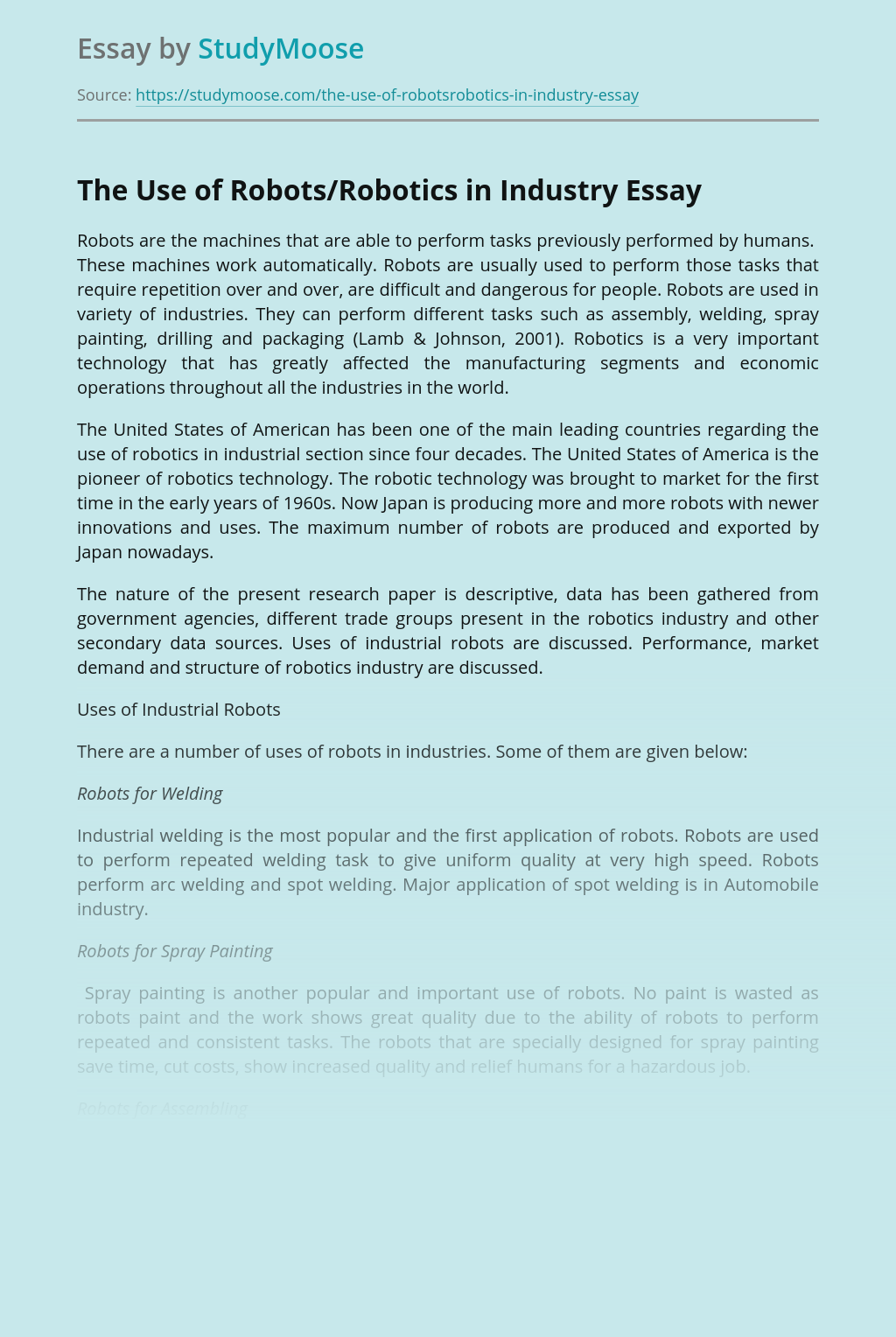 Turn in your highest-quality paper
Get a qualified writer to help you with
“ The Use of Robots/Robotics in Industry ”
Get high-quality paper
Helping students since 2015
Stay Safe, Stay Original