Tidal Energy as One of Alternative Energy Resources

‘’Tidal power is the conversion of the kinetic energy of water into energy, mainly electricity’’. It is not so widely used but, in the near future it is certainly going to be of great use to generate power supply. It is a costly affair to generate tidal energy, it also requires a lot of technical expertise to generate power. Tidal energy has an edge of being more predictive as compared to wind and solar energy. However, recent developments in the field of tidal energy has shown some significant growth and tidal energy can be produced at a much lesser cost as compared to the early days and it has a great potential to be an alternative source of energy.

Turn in your highest-quality paper
Get a qualified writer to help you with
“ Tidal Energy as One of Alternative Energy Resources ”
Get high-quality paper
NEW! AI matching with writers

It was in the early days of the 19th century that the process of using falling water and spinning turbines to create electricity was introduced in the U.S. and Europe.

Prior to this water was stored in large storage ponds, and as the tide went out , it turned the turbines which was used to generate electricity.

The world’s first large scale tidal power plant was established in Brittany, France and became operational in the year 1966. It is also known as the La Rance tidal power station as it is built on the river rance in France with a installed capacity to generate power upto 240MW (Mega watts or million watts). 1 MW has the potential to provide power to about 1000 homes. The largest tidal power plant is built on the Sihwa Lake in South Korea with a capacity of up to 254MW.

Tidal power has a great potential to replace exhaustible sources of energy and be a great source of energy but it comes with a number of pros and cons.

India and the Tidal Energy

India has been a little laid back in terms of generating tidal power due to the high costs of installation. In the year 2009, a tidal power project was initiated in the state of Gujarat which has the longest coastline in the Gulf of Khambat near hazira port but was called off due to high capital cost. However, the state energy department has revived the project. A GR(Government Resolution) has been issued claiming it is ‘’possible to produce tidal wave power at two spots – in the Gulf of Khambat and in the Gulf of Mandva near Kutch. About 200MW and 300MW of power can be produced that can help do away with the power cut in the adjoining areas.

Tidal energy has a bright future but this can be done through innovation in the field of tidal energy as it has a major role to play as the basics of generating tidal power has remained the same. It has been estimated that it could potentially produce 20% of Britain’s electricity. However a lot of research is required in order to tap this energy at minimal cost.

Tidal Energy as One of Alternative Energy Resources. (2017, Jan 24). Retrieved from http://studymoose.com/tidal-energy-as-one-of-alternative-energy-resources-essay 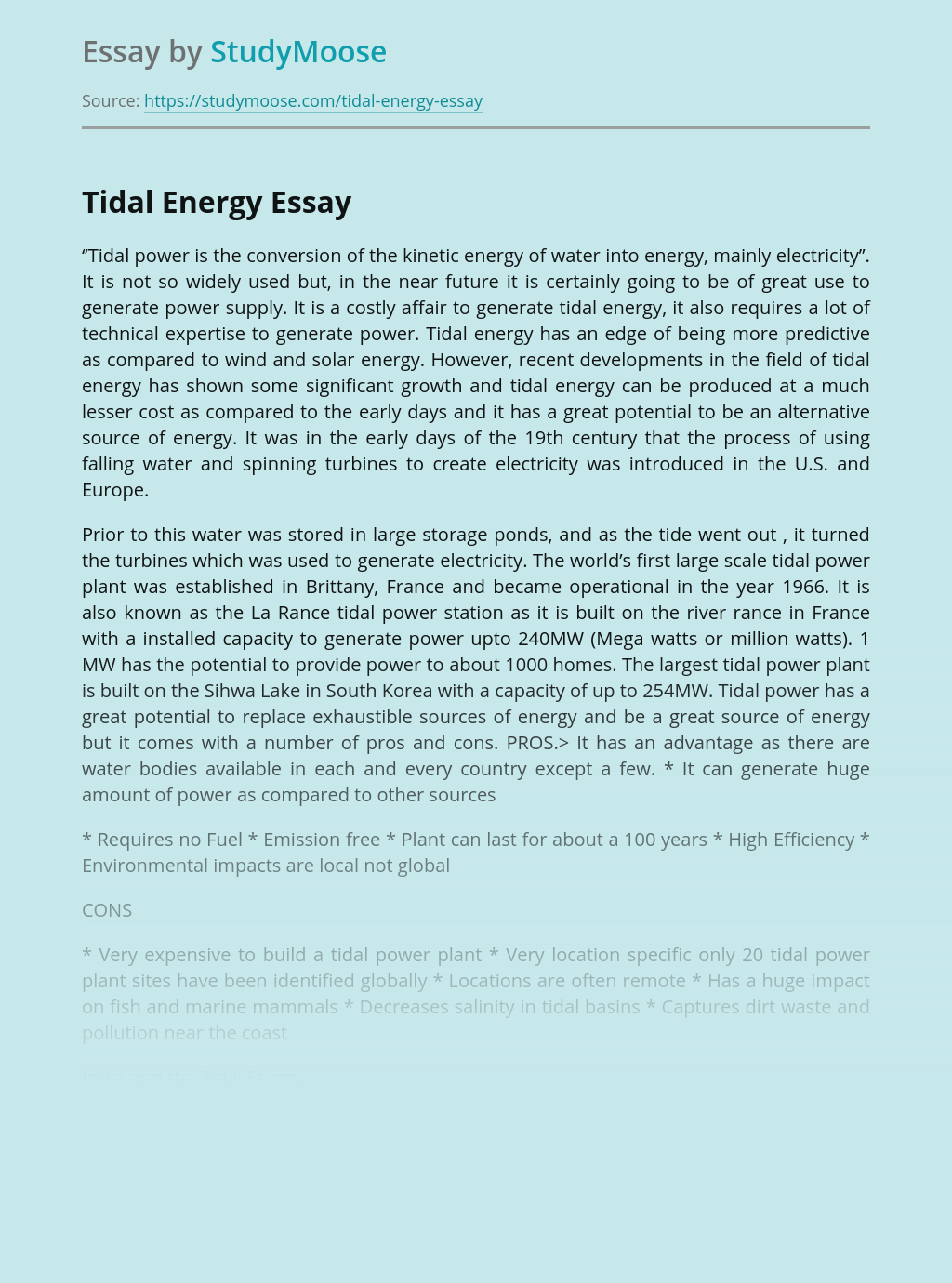 Turn in your highest-quality paper
Get a qualified writer to help you with
“ Tidal Energy as One of Alternative Energy Resources ”
Get high-quality paper
Helping students since 2015
Stay Safe, Stay Original