For years, traditional or alternative medicine have been dubbed as unorthodox and the question of their safety still remains; though multiple countries utilize them. The Philippines is no stranger to turning to these kinds of medication especially in times of desperate need; since the majority of its population live in poverty, acquiring treatment from professionals are quite hard to come by. Kandikandilaan, scientifically known as Stachytarpheta Jamaicensis, is a plant that is commonly utilized by Filipinos to treat common ailments. The plant is commonly growing weed in the country, which is characterized by its physical appearance and chemical constituents.

Don't use plagiarized sources. Get your custom essay on
“ Stachytarpheta Jamaicensis in Alternative Medicine ”
Get custom paper
NEW! smart matching with writer

Multiple studies have been conducted on this topic, these studies dwell unto the toxicity of other plants some belong to the same family as Stachytarpheta Jamaicensis while some do not . These said studies gave insight on how the group could perform experiments to determine the toxicity of the plants extract.Furthermore, aside from methods, the articles were able to provide information on the chemical constituents that pave the way for a plant’s toxicity.

This research aims to expand and provide further information on the toxicity of Stachytarpheta Jamaicensis. Moreover, only a certain number of plants are pharmaceutically tested and approved by the Philippine Department of Health. Through this we can help improve and provide additional

A study conducted by Ataman, Idu, Odia, Omogbai, Amaechina, and Ebite (2006) focused on the toxicity of S. Jamaicensis by testing the plant with wistar rats. They discovered that there were changes in the lungs, kidney, testis and liver tissues of the rats; this can imply that the said plant is toxic in specific tissues rather than it being due to dose related toxicity. Moreover, a similar study was executed by Idu, Omogbai, Aghimien, Amaechina, Timothy, and Omonigho (2007) and the results they have gathered showed no significant changes within the rats that were tested when exposed to high concentrations; similar results were obtained by Taylor (2006) who also had a similar research topic. In addition, Liew, Majorie, and Yong (2016) also mentioned that the toxicity of the plant only affects specific tissues and it does not display toxic effects when distributed at higher concentrations. Given that all of the studies proved no effects were observed at high concentrations of the plant, it is safe enough for it to be used as a cure and medication to health complications. It was mentioned in all studies that more research should be done about the toxicity of S. Jamaicensis and its chronic effects.

Toxicity of herbal plants within the same family as S. Jamaicensis

Due to the increasing usage of herbs as an alternative method to treat various ailments and illnesses, international health organizations require intensive toxicological evaluation before these may be pharmaceutically approved and developed into medicine for safety measures. Thus, numerous studies have been executed on the wide array of medicinal plants for the purpose of evaluating its safety and efficiency to treat certain diseases. In relation to S. Jamaicensis, its family Verbenaceae is revealed to cause negative side-effects on subjects when ingested at higher dosages and long durations of time (Murugesan, Senthilkumar, Babu & Rajasugunasekar, 2016; Sousa, Silva, Campos & Viccini, 2009). Sousa et al (2009) tested Lantana Camara and Lippia alba’s cytotoxic and genotoxic side effects with the use of their respective assays. The findings of this study imply that individuals must take precautionary measures when utilizing these two herbs for medicinal uses as consumption at higher concentrations and longer durations of time may vigorously harm an individual. In line with this, chromosome aberrations were observed, implying both plants to be genotoxic which may cause severe impact to one’s well being. Furthermore, Murugesan et al (2016) evaluates Latana Camara’s toxicological effects despite its multiple benefits in order to utilize its extract as an efficient pesticide for disease and pest control. The method used identified active constituents such as the presence of E-anethol and E-neridol, the most toxic compounds found in plant’s oils. However, the researchers conclude higher concentrations of L. Camara may result to a much effective pesticide.

Aside from the plant family of Stachytarpheta jamaicensis (L.) Vahl., other methodologies were adopted to determine the acute and chronic toxicity of their respective plants. In preparation for the experiment, the plants were authorized and identified by botanists from well-esteemed or well-respected botanical and/or research organizations. After collating the plant sample, the seeds were thoroughly rinsed to get rid of any dirt that may hinder the observation on its effectivity in the experiment. Afterwards, it was cut in small pieces and dried at 40 C for one week (Sasidharan, S., Mordi, M. N., Ismail, S., Mansor, S., Sahgal, G., & Ramanathan, S., 2010). In another source, it was dried at 35 C for three days (Bussmann, R., Malca, G., Glenn, A., Sharon, D., Nilsen, B., Parris, B., Townesmith, A. 2011). In preparation for the experiment, the powdered seeds were extracted with methanol through the maceration method for 4 days, filtered, concentrated in an evaporator at 40 C and dissolved in Prophyleneglycol/Tween 80/water to enhance the solubility for future experiments (Sasidharan, S. et al., 2010). In another experiment, it was grounded and the samples were weighed with the samples being submerged in 100 ml of 96% ethanol and boiling distilled water with maceration for 7 days and 24 hours, respectively. After maceration, 100 ml 96% ethanol was added to the water extracts to allow dryness using a rotary-evaporator. To determine the concentration of the extract, 1 ml of previous homogenization was removed, oven dried and then weighed (Bussmann, R. et al., 2011).

A similar research article entitled High dosage toxicity testing of medicinal herbs Momordica charantica. Emblica officinalls, Tribulus terrestris and Trigonella foenum graecium in albino pice: a pilot study by V. Vikram and S. Kaushal, made use of the Acute oral toxicity test in order to determine the hazards and risks that may occur when an individual intakes a medicinal herb. Results obtained from the study states that large dosage of each extract showed negligible signs of toxicity within the female albino rats. Moreover, no mortality was seen in the rats. Therefore, the medicinal herbal plants tested within the acute oral toxicity assay are safe to consume at higher dosage for there were toxicity and fatality were not observed in all the five subjects. On the other hand, the article entitled Antibacterial, Antifungal and Toxicity of Rare Iranian Plants contradicts the interpretation and conclusion of the results. Results derived from the toxicity screening states that the plant extacts of C. Tubulosa, R. Cyprius and C. Deciduas had maximum toxicity against A. Salina. Toxicity arised from dissimilar materials present in the extract than the antimicrobials. However, T. Glabra, T. Dioca, B. Edilus, and C. Oxypetala and ethanolic phase of C. Deciduas extracts had milder toxicity. The ethanolic phase of C. Dedciduas, with the least MICs against two pathogens, Fb oxysporum and B. Subtilis have relatively low toxicity compared to the other extracts. C. Tubuloda extract has the highest cytoxicity compared to the others. 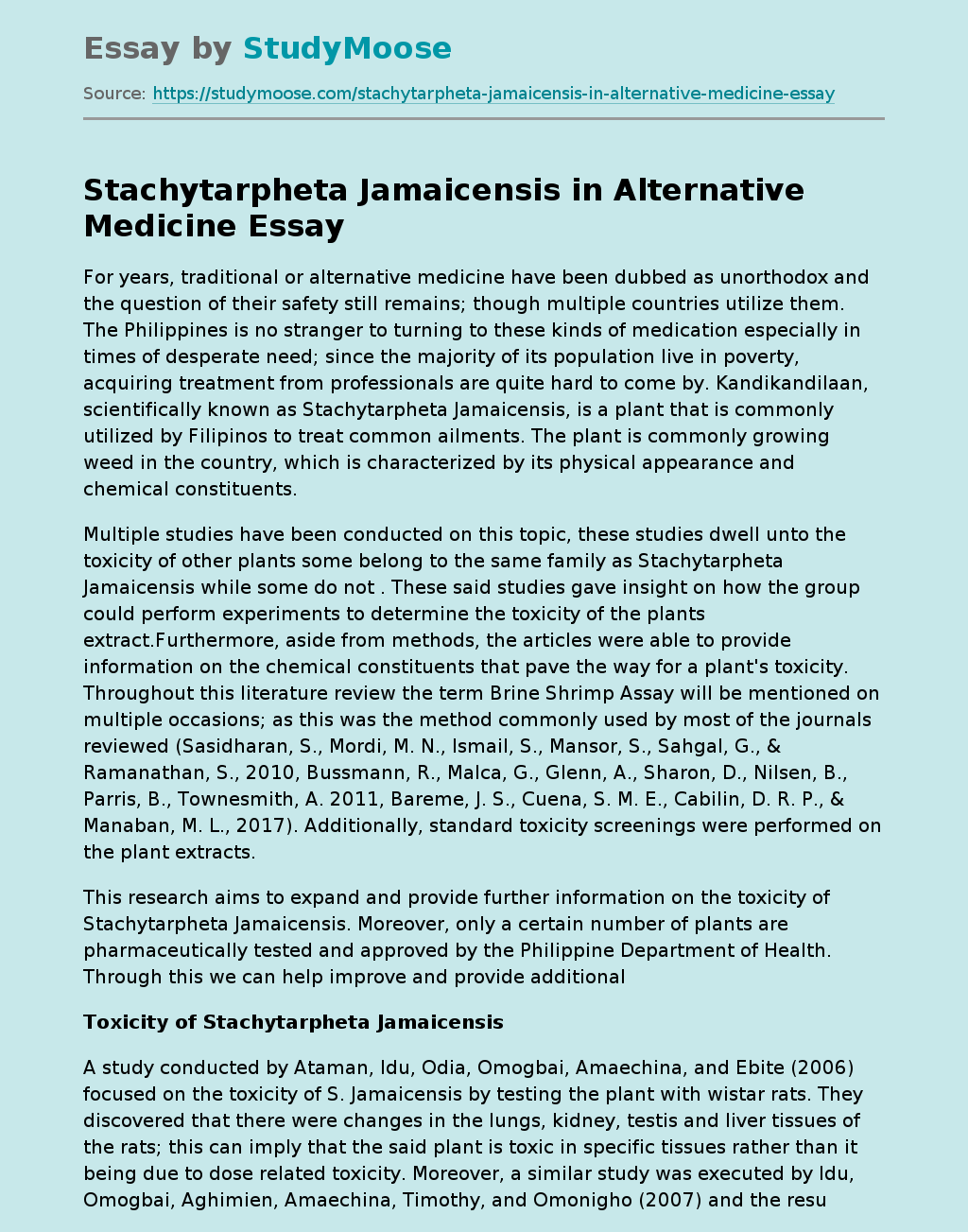