As a student, this study is important because it can be used in many ways, like art works, decorating, and other school projects. Unlike the other glue, it is not expensive which is an important thing for students

This study the feasibility of the Star Apple Sap as glue. Thus the white glue contains gelatin that is made up of skin, bones and hooves of horses, pigs and cows, but the sap of the star apple is more cheap and more sticky than the ordinary white glue because we can get its sap from it tree or in the actual fruit of Star Apple by squashing it from its peel and it is a common fruit that you can find it easily in the market or in farms.

Turn in your highest-quality paper
Get a qualified writer to help you with
“ Star Apple Sap as a alternative Glue ”
Get high-quality paper
NEW! AI matching with writer

Star Apple (Chrysophyllum cainito) is a tropical tree of the family Sapotaceae. It is native to the Greater Antilles and the West Indies. It has spread to the lowlands of Central America and is now is grown throughout the tropics, including Southeast Asia.

The study is entitled Star Apple as a alternative glue . The white glue contains gelatin that is made up of skin, bones and hooves of horses, pigs and cows, but the sap of the star apple is more cheap and more sticky than the ordinary white glue because we can get its sap from it tree or in the actual fruit of Star Apple by squashing it from its peel and it is a common fruit that you can find it easily in the market or in farms. The extract of the Star Apple (Chrysophyllum cainito) can make glue because it contains an alkaloid, resin, resinic acid and substances that can be use as glue. The researchers aimed at looking for an organic and natural. Ideally, the study promotes a tandem between science and creation’s conservation.

The materials composing the solution were 10 mL of the Star Apple (Chrysophyllum cainito). The set up was composed of experimental and control group. The experimental group was being bond by using a specific commercial glue. On the other hand, the control group was being bond by using the organic glue (Star Apple). Data were collected to gather relevant information. In the end of the findings of the study, it was found out that the solution composing of 10 mL solution of Apple (Chrysophyllum cainito) extract can bond objects in a short span of time compared with the commercial one.

An adhesive is a material, typically liquid or semi-liquid, that adheres or bond items together. Adhesives come from either natural or systematic sources. Nowadays, synthetic adhesive are toxic to humans by sniffing it. It contains toxins that can pose severe risks to health. However, natural adhesives are almost forgotten because it takes time to make and it is not practical anymore, but it does not cause health risks toxins. In this study, researchers will make natural adhesives from two fruits: Lanzones and Star Apple. A Lanzones (Lansium Domesticum Corr.) or maybe known as “Langsat” is one of the most popular fruit in the country. The sap of the skin of the Lanzones is extremely sticky, that it can be a good characteristic of glue.

The Star Apple (Chyrosophyllum Cainito) had its name derived from the star like appearance of the core when the fruit is cut in the cross section. The tough skin surrounds a white, sweet, edible pulp in which are fresh dessert fruit, but care should be taken remove the skin which contains unpleasant-tasting latex. In this study, researchers will focus more on how effective are organic adhesives as an alternate to ordinary adhesives. The purpose of this study is to determine which fruit: Lanzones or Star Apple is a better adhesive.

Which between the extract of Lansium Domesticum Corr. (Lanzones) sap and the Chyrosophyllum Cainito (Star Apple) sap is a better adhesive?

Chrysophyllum cainito is a tropical tree of the family Sapotaceae, native to the lowlands of Central America and the West Indies. It grows rapidly and reaches 20 m in height.It has numerous common names including cainito, caimito, star apple, golden leaf tree, abiaba,pomme de lait, estrella, and aguay. It is also known by the synonymAchras caimito. The leaves are evergreen, alternate, simple oval, entire, 5-15 cm long; the underside shines with a golden color when seen from a distance. The tinyflowers are purplish white and have a sweet fragrant smell. The tree is also hermaphroditic (self-fertile). It has round, purple-skinned fruit that is often green around the calyx, with a star pattern in the pulp.

Sometimes there is a greenish-white variety of the fruit. The skin is rich in latex, and both it and the rind are not edible. The flattened seeds are light brown and hard. It bears fruit year around after it reaches about seven years of age. The fruits are delicious as a fresh dessert fruit; it is sweet and best served chilled. The flattened seeds are light brown and hard. Infusions of the leaves have been used against diabetes and articular rheumatism. The bark is considered a tonic and stimulant, and a bark decoction is used as an antitussive. The fruit also exist in two colors, dark purple and greenish brown. The purple fruit has a more dense skin and texture while the greenish brown fruit has a thin skin and a more liquid pulp.

We all know that our country today are suffering crisis.That was the reason why I want to launch this study,cause I want to help our community to be useful.The Star Apple is a very popular fruit in many tropical parts of the world.It is cultivated for its edible fruit,which is the size & shape of an apple and is named for the star-shaped core.The star apple usually comes in two forms either the dark purple skinned variety with red-purple pulp or the green skinned variety with clear-white pulp.

-Does the extract of a star apple(chrysophyllum cainito)leaves can be made as paste?

-If I use the extract of a star apple leaves as paste,it can be useful to our community cause contain an alkaloid,resin,resinic acid and a bitter substances that can be use as paste.

Significance of the study

-It makes my study important cause it can be used in many ways, such as pasting works,decorating,painting & other things.Also its not expensive but it can give us low price.Like other paste or glue, it also useful in our economic……

-I want to include in my study the other parts of a star apple that has extract so that I will determine which part have more extract than the leaves.And also I will statistical test used to determine the possible limitations of the finding.

-a tropical American tree of the sapodilla family.One of the relatively minor fruits of the family Sapotaceae

-a naturally occuring amine produced by a plant.

Review of the related literature

-According to the west Indies & Central America. It is cultivated for its edible fruit, which is the size & shape of an apple and is named for the star-shaped core. One of the relatively minor fruits of the family sapotaceae, the star apple or golden tree,has acquired a moderate assortment of regional names.

-In Jamaica, the flesh is often with sour orange juice, a combination called “matrimony”; or it is mixed with orange juice, a little sugar, grated nutmeg & a spoonful of sherry and eaten as dessert.

-First, you should prepare all the equipment that you will use to our project. Collect as many leaves of a star apple. Then,cut it with the knife. Press the stoke of the leaves. put the extract in the close container. And then repeat the following procedures until the close container will be full.

-There fore i conclude that the extract of Star Apple leaves can be used as paste and it is environment friendly.Like other paste it is also very effective.

-This investigatory project would never been realized without the financial support, effort and unselfish assistance of the people who willingly helped the researcher.In due recognition of all those who contributed to the success of this study.The researcher extend her deep gratitude and heartfelt appreciation to the following:

First of all,our almighty God,the creator and savior who give life, good health, wisdom and guidance to finish this investigatory project.

Ms. Balve Granido our research teacher who gives support and guidance to make this study successful.

To our parents for the financial assistance and guidance to the researcher to make her project successful.

To my classmates especially Rea Sarino who helped the researcher in her study.]

The economic stability of a nation depends on the availability of the cheap sources of our products. Products from star apple extract are expected to supply part of the country’s economic problem in the future.

Findings of the study showed effective results in the production of glue from star apple extract. The result was a sticky substance that can be used as a substitute for any commercial glue.

Therefore, the researchers can conclude that star apple extract can substitute any commercial glue. 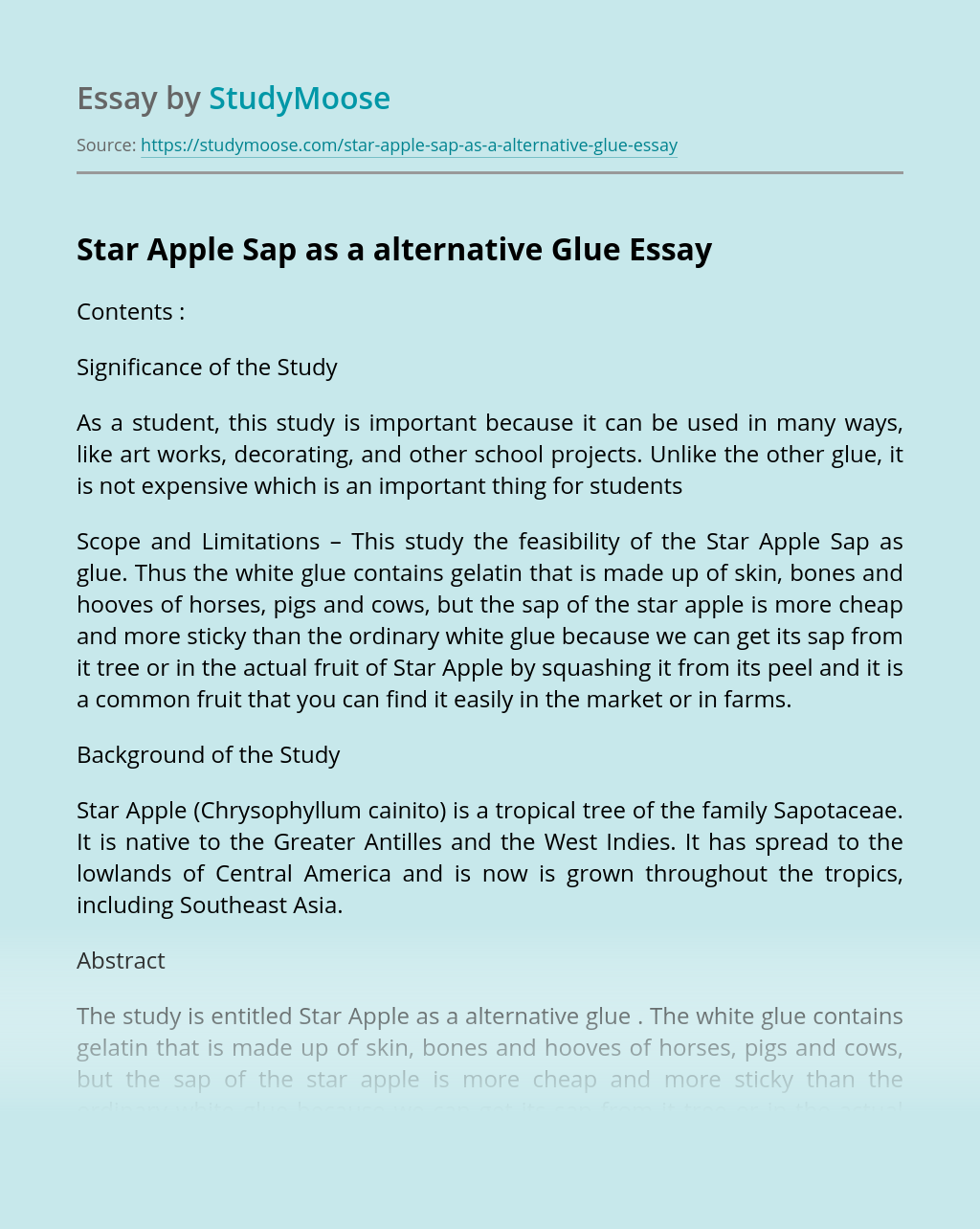 Turn in your highest-quality paper
Get a qualified writer to help you with
“ Star Apple Sap as a alternative Glue ”
Get high-quality paper
Helping students since 2015
Stay Safe, Stay Original