I. Perspective held by the student.

Though we understand the point of the manager in avoiding extra payment for overtime, we can be more sympathetic to employees who worked so hard to address the demand of the clients for the days that other employees are absent. For us, we should be paid for the time we’ve work rather than sharing the pay of our colleagues who are absent for the day. If works has been designated equally, we may agree with the manager however, we have to police/watch each other to know who works who is something else.

Turn in your highest-quality paper
Get a qualified writer to help you with
“ Top Star Bakery Case Analysis ”
Get high-quality paper
NEW! AI matching with writer

We cannot quantify the word load added to those who are present and therefore, it is not fair that we will be paid extra equally.

Top Star Bakery was established in October of 1975 engaged in the manufacture of bakery products. They entered into medium-term contract to bake sesame seed buns for local hamburger chain that had total branch network of more than 8 outlets in Metro manila in the year 1986.

The sudden demand prompted management of Top Star to consider expansion program to triple its output. Since then, Top Star had continued to grow with the burger chain whose branch network reached to 20 stores in 1987. Top Star management has been paternalistic that allows workers to recruit their relatives and friends to join the company. It resulted to low labor turnover. Its employees enjoy some benefits like free snacks, provision for emergency loan, free uniforms and medical checkup. On May 2, 1987, Production Manager Mr.

Manny Bautista was furious over the refusal of his bakers to work overtime. Recently the company accepted a large order for 20,000 pieces of buns and 40% of workforce did not show up for no reason at all. Manny felt helpless and furious at the same time when remaining workers refused to work overtime to complete the job. Because of this incident he wanted to change the practice of previous manager regarding the manner of computing overtime for the bakers. The compensation scheme used by
Angel Cruz previous manager to avoid overtime pay is that when a worker absented himself, his pay for the day will be distributed equally among all those present. Angel observed that the bakers themselves could adjust their working time by either accelerating or slowing their movements. Using this scheme, management could control direct labor costs without spending too much time supervising the workers because they were not being paid overtime in hourly basis. Consequently, no overtime was paid when some workers were absent and yet the bakery production output did not suffer. In Manny’s time, many employees complained to compensation scheme because it was unfair to distribute the income of absentee to all those present since it was difficult to say who absorbed the “extra” work and to what extent. Workers proposed for hourly basis computation for their overtime. Manny was convinced to change the overtime scheme and decided to explore other alternatives. Manny’s predicament was how to inform the workers about the changes since the proposed plan is to fire 12 personnel which roughly comprised 20% of the workforce.

III. Statement of the Problem

How should Mr. Manny Bautista present and introduce the new scheme or planned changes? How should he control direct labor cost effectively with his new scheme of payment of overtime?

What should be made to improve Top Star Bakery’s work or labor force? How to conduct an implementation plan that can convince the workers to accept the planned changes? What other alternative ways to motivate employees in rendering overtime services? Determine workload of the workers and evaluate them carefully and assess each performance.

To know what is the best way to motivate and lead the workers of Top Star Bakery:

← Provide a good selection process of employees
← Implementation of piecework and setting quota
← Improve motivational plan for workers
← Gives incentives, rewards and recognition for the work accomplishments ← Monitor and assess performance of the workers from time to time ← Impose and update new policies, rules and regulations at work ← Fire 6 to 12 workers

← Improve motivational plan for workers
• It will help the company to introduce the changes not in an abrupt manner but through timing. • Able to meet their demands

← Gives incentives, rewards and recognition for the work accomplishments • Motivate the workers to increase its production • Workers will be more efficient and effective in doing their jobs which result to good production or output • Boosting their self-esteem by appreciating and recognizing for a job well done

← Impose and update new policies, rules and regulations at work • Implementing gradually changes of new policies for the workers to adapt • Rank workers according to their job performance and distribute or ask worker’s opinion about the changes • Minimize absent among employees

Motivating an employee to come to work is not a task for a manager since it is given that everybody has to come to work to earn a living. But, giving them a good reason to work is another factor. An environment that does not only constitute a work environment but rather a place where you can be happy while earning a living is something a manager can do or create.

Security is one factor in which an employee with stay and be product. 12 employees at once will not set a good impression for security but will create scares and second thought for these people will make an avenue for them to look for another job which will give them the security that they are looking for. Changes should be implemented in a manner that will not create chaos and mass resignation. This will not just hurt the employee but also the company.

Change is constant, but not everybody can adapt to change. Most of the people cannot just depart from their comfort zones, therefore, change though inevitable, should be implemented in a cautions manner.

Being a manager is not an easy task. It does not mean that you are a manager you can do anything you want at any time. There are things you need to consider prior to implementing new rules and regulation to achieve profitability. One wrong decision can result to your downfall. To implement new work related change should be done in manner that will not create shocks to employee. Consider the following:

• Carefully study each of your employees working behavior or personality as a whole.

• In this group you will find someone that has a potential as a leader, you need to give him more attention for you can use him to introduce new policies or he can destroy you if he works against you. Talk to this person so you will know how the entire workforce feel about possible changes you will be making.

• Conduct a survey; give your people an option. Lay down the possible option you can give them. As a manager you are not there just to manage the company but also to manage people. These people will be looking at you if you’re with them or against them. If you want their cooperation, you need not give them the impression that you are against them but still protecting the companies’ interest in the process.

• Aside from your personal assessment, let your employee assess themselves. This will let them think if they are still doing well in the job. You can then fire those who are not performing. They can put the blame on themselves because they know where they are exactly or how they are performing on the job.

• Assign a leader in each department. You can use this person learn how your people are feeling. Most employees will hesitate to approach you for their concerns because of your title. Or might as will make them feel that you are one of them so you will have direct access of their thoughts.

• Finally, you can introduce changes in a face by face manner. Do not implement change in one setup. Let them adjust little by little to avoid resistance of the changes that you are making. 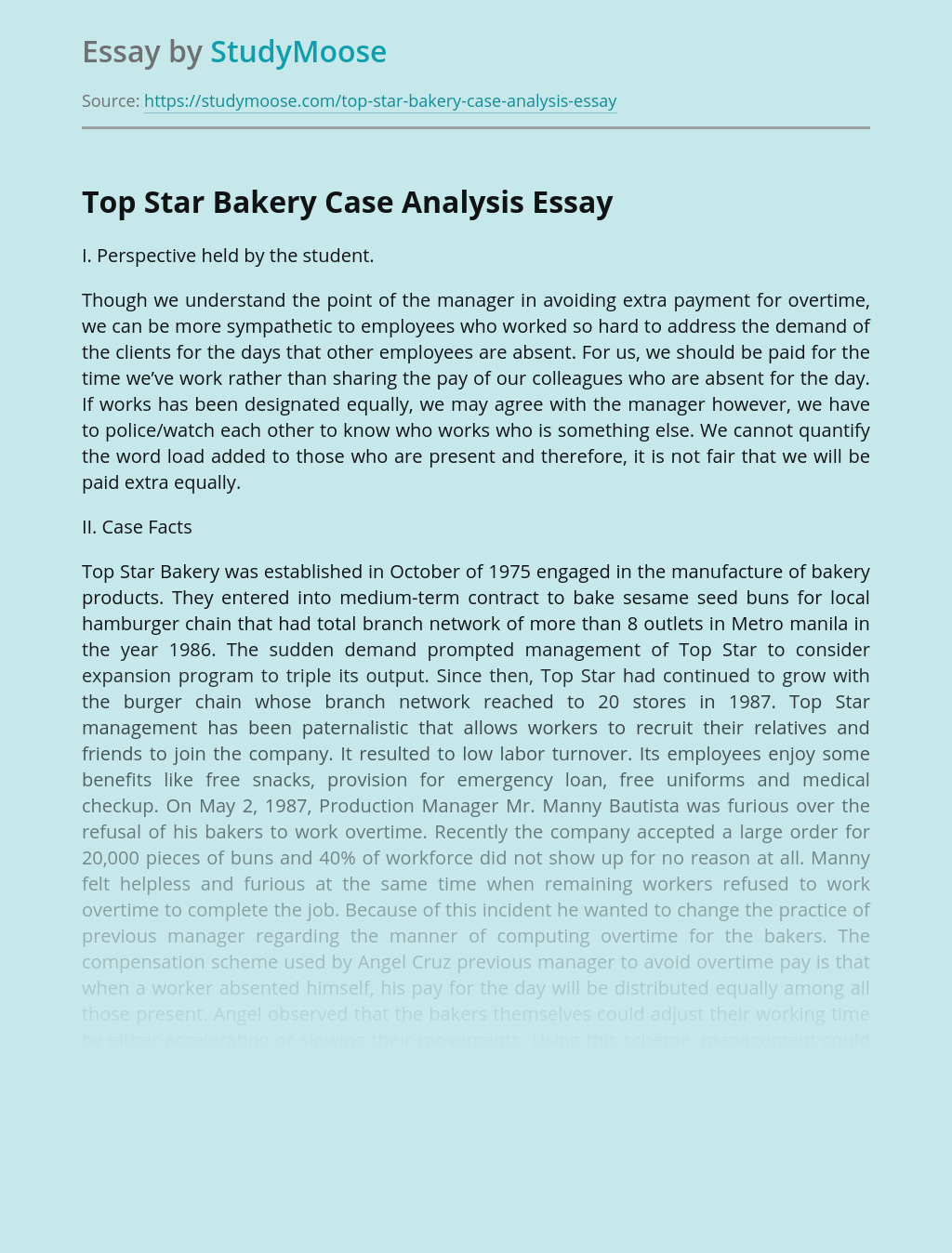 Turn in your highest-quality paper
Get a qualified writer to help you with
“ Top Star Bakery Case Analysis ”
Get high-quality paper
Helping students since 2015
Stay Safe, Stay Original