Irony in “Top of the Food Chain” by T. Coraghessan Boyle Essay

T. Coraghessan Boyle’s “On Top of the Food Chain” is more than just a narration of a selfish person’s mistakes. The narrator’s tone is a literary element used to show man’s indifference for organisms that are of no immediate benefit or are a nuisance to them. _”The thing was, we had a little problem with the insects…”_ The narrator’s tone in “Top of the Food Chain” is quickly shown as self-centered in working for his comforts and indifferent to the havoc his choices make on the environment.

Don't use plagiarized sources.
Get Your Custom Essay on Irony in “Top of the Food Chain” by T. Coraghessan Boyle Just from $13,9/Page

Humans believe that we can solve everything that is put upon us, but there is always a catch. In this story, Mother Nature proves us that she can always be ahead of how humans perceive things.

From the very first sentence, the narrator is portrayed as a self-serving person. In charge of a group bringing health care to a third-world village, his choices to improve the lives of the villagers lead to wreaking chaos on the local food chain.

The improvements start by poisoning the flies. When the geckos that feed off of these flies die due to starvation, the cat population also diminishes. When the cats are gone, the rat population is left unregulated and is allowed to spread disease to the humans and ruin their crops.

The narrator’s condescending tone towards these disastrous events is the most significant factor that Boyle uses to develop his theme. The narrator assumes he is at the top of the food chain, and he has no problem killing off the smaller species. However, the narrator is too indifferent to realize that by hurting the lower members of the food chain, he has hurt himself. This is what shows the true irony in the story. The narrator did something that he believes is good for him, but instead it ends up being entirely the opposite of it.

The story reflects that humans can do immoral things, without thinking well of the consequences and the effect it is going to have on others. “Top of the Food Chain” is ironic since Mother Nature got back at all of the selfishness that was portrayed in the story. Global Warming is a great example of how nature can get back to humans because of our own selfish actions. Human activities contribute to climate change by causing changes in Earth’s atmosphere in the amounts of greenhouse gases, aerosols (small particles), and cloudiness. The largest known contribution comes from the burning of fossil fuels, which releases carbon dioxide gas to the atmosphere. The release of carbon dioxide damages the atmosphere, which cause drastic changes in the climate.

However, his tone following the severe circumstances that played out in the story implies that he simply does not care about anything other then what he wants. The narrator’s arrogance and belief that he can do what ever he wants without hurting himself reflects his idea that he is Top of the Food Chain. Unfortunately, he learns the hard way that his selfish actions turn around and hurt him in the end, which ends up being ironic. T. Coraghessan Boyle demonstrated us that nature can always get back to humans despite of whatever we do; selfish or unselfish.

Irony in “Top of the Food Chain” by T. Coraghessan Boyle. (2016, Aug 09). Retrieved from https://studymoose.com/irony-in-top-of-the-food-chain-by-t-coraghessan-boyle-essay 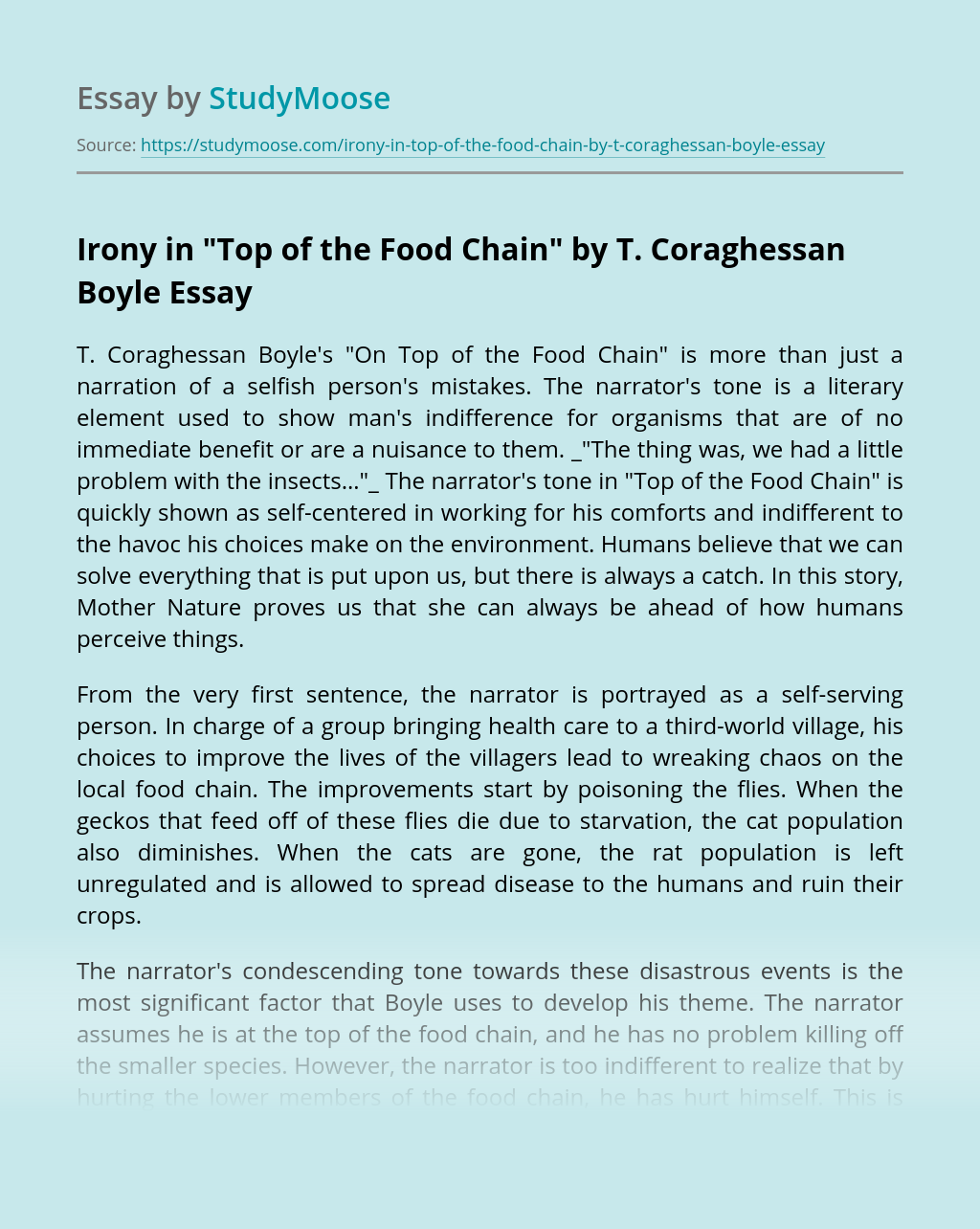 There are many different challenges that Stanley Yelnats (the main character) from the bestselling novel Holes written by Louis Sachar has to over come. Stanley was first seen in the movie when a tilted shot of shoes hit him in the head and he fell on the ground portraying he was weak and a bit... VIEW ESSAY

As modernization evolve, so is technology. People are finding faster, and easier methods for communicating with friends and loved ones. There are many forms of communication, however, I will be comparing face-to-face and social media interactions. Face-to-face interactions are becoming less prevalent today. Social media tools such as Facebook, WhatsApp, and Instagram, has taken over... VIEW ESSAY

View sample
Get Essay
The Most Dangerous Game: Character Analysis of General Zaroff

?General Zaroff’s refined emotions conceal a disturbing desire to inflict suffering and death for his own amusement. In many ways, Zaroff considers himself a god who can go about life as he pleases. Zaroffs’s madness stems from a life of wealth, luxury, and militarism, which inflate his ego and sense of entitlement and impose few... VIEW ESSAY

Introduction: We are very proud because the UNESCO gas declared the 21st February as the International Mother Language Day. Don't use plagiarized sources. Get Your Custom Essay on Irony in “Top of the Food Chain” by T. Coraghessan Boyle Just from $13,9/Page Get custom paper It is such a prestige that we cannot find the right... VIEW ESSAY

On the exterior it seems that Dougy, the book, is all about racism. However when you delve further into Dougy, many other strong messages come across. Some that stand out are finding yourself, appreciating what we have and, most strongly, having an open mind. At the beginning Dougy, the boy, is timid, unsure of his... VIEW ESSAY