Alternative Dispute Resolution (ADR) is an increasingly popular option that allows people to resolve disputes outside of court in a cooperative manner. ADR can be faster, cheaper and less stressful than going to court. Most important, the use of ADR can provide greater satisfaction with the way disputes are resolved. The writer will discuss how ADR clause can be use in the learning team.

The learning team is an effective tool used at the University of Phoenix to help students achieve academic success.

The writer is an alumni student and has had much experience with working with students in the learning team environment. Some experiences have been quite satisfying and a few have been horrifying. The main dilemma in many of the learning teams was how to manage conflict resolution effectually amongst the members when problems could not be agreed upon. Such potential conflicts that might arise among or between team members were disagreements over the appropriate steps acquired to complete the assignment or lack of contribution and participation from individual team members.

One type of alternative dispute resolution that was used in my prior learning teams was mediation which was very useful and another method is medarb which will be later discussed by the writer.

The writer designed an ADR clause that can be used in any course. The clause states: Each student is to abide by the student code of conduct implemented by the University of Phoenix. Each student is expected to complete his or her own assignment is a timely manner and to participate in the success of the team achieving their objectives.

The team charter and logs are guides used to carefully assist the students with what their expectations are during the course. Each student is expected to participate in the completion of both forms which will be used as a contract. Each member is expected to be ethical, respectful, and fair should a disagreement arise.

If a dispute arises out of or relates to this contract, or the breach thereof, and if said dispute cannot be settled through negotiation, the parties agree first to try in good faith to settle the dispute by mediation .

Mediation is a process in which both parties meet with a neutral mediator who listens to each side explain its position. Mediation is normally quicker and cheaper than the arbitration approach. The main advantage of mediation is that all associated documents and communications are kept confidential (Superior Court of California, 2007). In mediation, the mediator (a neutral) assists the parties in reaching a mutually acceptable resolution of their dispute. Unlike lawsuits or some other types of ADR, the mediator does not decide how the dispute is to be resolved. The parties do. Mediation is a cooperative process in which the parties work together toward a resolution that tries to meet everyone’s interests, instead of working against each other.

Mediation often leads to better communication between the parties and lasting resolutions, and is also particularly successful when parties have a continuing relationship, such as neighbors, partners or businesses. It also is very effective where personal feelings are getting in the way of a resolution. Mediation normally gives the parties a chance to express their concerns in a voluntary, confidential process while working towards a resolution. Mediation has an 80 % success rate and encourages creativity in the resolution process. (Erickson, 2006).

Finally, a second option to resolve a dispute if the mediation is unsuccessful is medarb, the dispute would then go to arbitration under the university instructor for that particular course. An example of medarb clause follows:If a dispute arises out of or relates to this contract, or the breach thereof, and if said dispute cannot be settled through direct discussions, the parties agree to first endeavor to settle the dispute in an amicable manner by mediation administered by the elected team member, before resorting to arbitration. Thereafter, any unresolved controversy or claim arising out of or relating to this contract, or breach thereof, shall be settled by the university instructor.

In conclusion, alternative dispute resolution clauses can be very useful tools when dealing with disagreements among team members. They are aides used to keeping orderliness and defuse conflict and maintain a positive working relationship.

Erickson, D. L. (2006). Two alternatives to Litigation: An Introduction to Arbitration and Mediation. 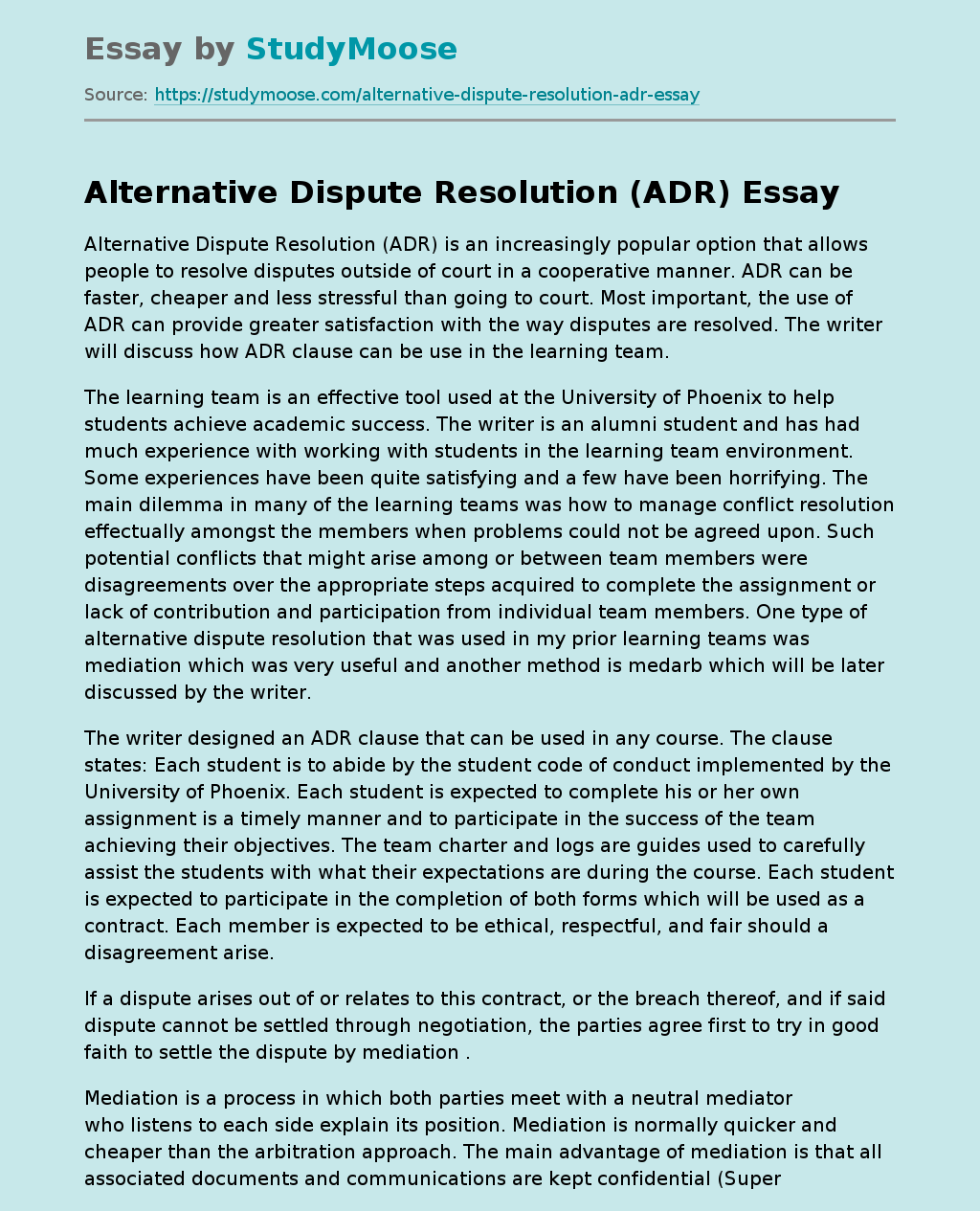