The Belize-Guatemala Territorial Dispute Is an unresolved bi-national territorial dispute between the state of Belize and Guatemala, neighbors in Central America. Belize or Belizean- controlled territory has been claimed in whole or in part by Guatemala since 1940. Now in 2013 they plan to claim Belize again. “British Honduras faced two obstacles to independence: British reluctance until the early 1960s to allow citizens to govern themselves, and Guatemala’s complete intransigence over its long-standing claim to the entire territory (Guatemala had repeatedly threatened to use force to take over British Honduras).

Don't use plagiarized sources. Get your custom essay on
“ The Belize Guatemala Dispute ”
Get custom paper
NEW! smart matching with writer

By 1961, the United Kingdom was willing to let the colony become independent. From 1964 the UK controlled only defense, foreign affairs, internal security, and the terms and conditions of the public service.

On 1 June 1973, the colony’s name was change to Belize in anticipation of independence. After 1975 the UK allowed the colonial government to internationalize its case for independence, so Belizeans participated in international diplomacy even before the area became a sovereign nation.

The stalemate in the protracted negotiations between the UK and Guatemala over the future status of Belize led Belizeans to seek the international community’s assistance in resolving issues associated with independence. The independent republics that emerged from the disintegrating Spanish Empire in the 1820s claimed that they had inherited Spain’s sovereign rights in the area.

The UK, however, never accepted such a doctrine. Based on this doctrine of inheritance, Mexico and Guatemala asserted claims to Belize. Mexico once claimed the portion of British Honduras north of the Sibun River but dropped the claim in a treaty with Britain in 1893.

Since then, Mexico has stated that it would revive the claim only if Guatemala were successful in obtaining all or part of the nation. Still, Mexico was the first nation to recognize Belize as an independent country. Guatemala, in opposition to both the UK and Belize positions, has an older view that this agreement was a treaty of cession through which Guatemala would give up its territorial claims only under certain conditions, including the construction of a road from Guatemala to the Caribbean coast.

The UK never built the road, and Guatemala said it would repudiate the treaty in 1884 but never followed up on the threat. The dispute appeared to have been forgotten until the 1930s, when the government of General Jorge Ubico claimed that the treaty was invalid because the road had not been constructed. Britain argued that because neither the short-lived Central American Federation (1821–39) nor Guatemala had ever exercised any authority in the area or even protested the British presence in the 19th century, British Honduras was clearly under British sovereignty. In its constitution of 1945, however, Guatemala stated that British Honduras was the twenty-third department of Guatemala.

Since 1954 a succession of military and right-wing governments in Guatemala frequently whipped up nationalist sentiment, generally to divert attention from domestic problems. Guatemala has also periodically massed troops on the border with the country in a threatening posture. Guatemala’s newest claim on Belize in 1999, however, makes no mention of the 1859 treaty, instead relying on Anglo-Spanish treaties of the 18th century. Latin American governments initially supported Guatemala. Cuba, however, was the first Latin country, in December 1975, to support Belize in a UN vote that affirmed Belize’s right to self-determination, independence, and territorial integrity. The outgoing Mexican president, Luis Echeverría, indicated that Mexico would appeal to the Security Council to prevent Guatemala’s designs on Belize from threatening peace in the area.

In 1976 President Omar Torrijos of Panama began campaigning for Belize’s cause, and in 1979 the Sandinista government in Nicaragua declared unequivocal support for an independent Belize. A last attempt was made to reach an agreement with Guatemala prior to the independence of Belize. The Belizean representatives to the talks made no concessions, and a proposal, called the Heads of Agreement, was initialed on 11 March 1981. However, when ultra-right political forces in Guatemala labeled the proposals as a sell-out, the Guatemalan government refused to ratify the agreement and withdrew from the negotiations. With the prospect of independence celebrations in the offing, the opposition’s morale fell. Independence came to Belize on 21 September 1981, without reaching an agreement with Guatemala.”

As stated in this short summary of the Belize Guatemala dispute from Wikipedia, Belize has been through a lot and has overcome every obstacle placed in front of them. Yes Belize may be small but Belizean has a huge Voice that will be heard. Belize won’t go down without a fight. If Guatemala would take Belize to the International Court of Justice (ICJ) it would be a huge battle. It would also be a great risk for the Belizean people because of the way our government is acting in Belize many would say we don’t stand a chance at the ICJ. But with the ability to fight for what we believe in we do stand a chance. As I quote from a once wise man Mather Luther King Jr, “Take the first step in faith. You don’t have to see the whole staircase, just take the first step.”

That is what Belize should do. We should take the first step in Fighting. As stated in the first five paragraphs, Belize does have the strength to win the case. But we don’t know how lucky we would be at the ICJ. Let’s say almost all the other countries in the world would be saying Belize would be wasting their time going to the ICJ because they would lose their case against Guatemala. But there might be some other country saying that Belize should fight. But no one knows what the actual outcome would be in this matter. Guatemala has not right to claim Belize as theirs. End closing, as the late Mahatma Gandhi stated “ I cannot teach you violence, as I do not myself believe in it. I can only teach you not to bow your heads before any one even at the cost of your life.” Belize won’t give up. 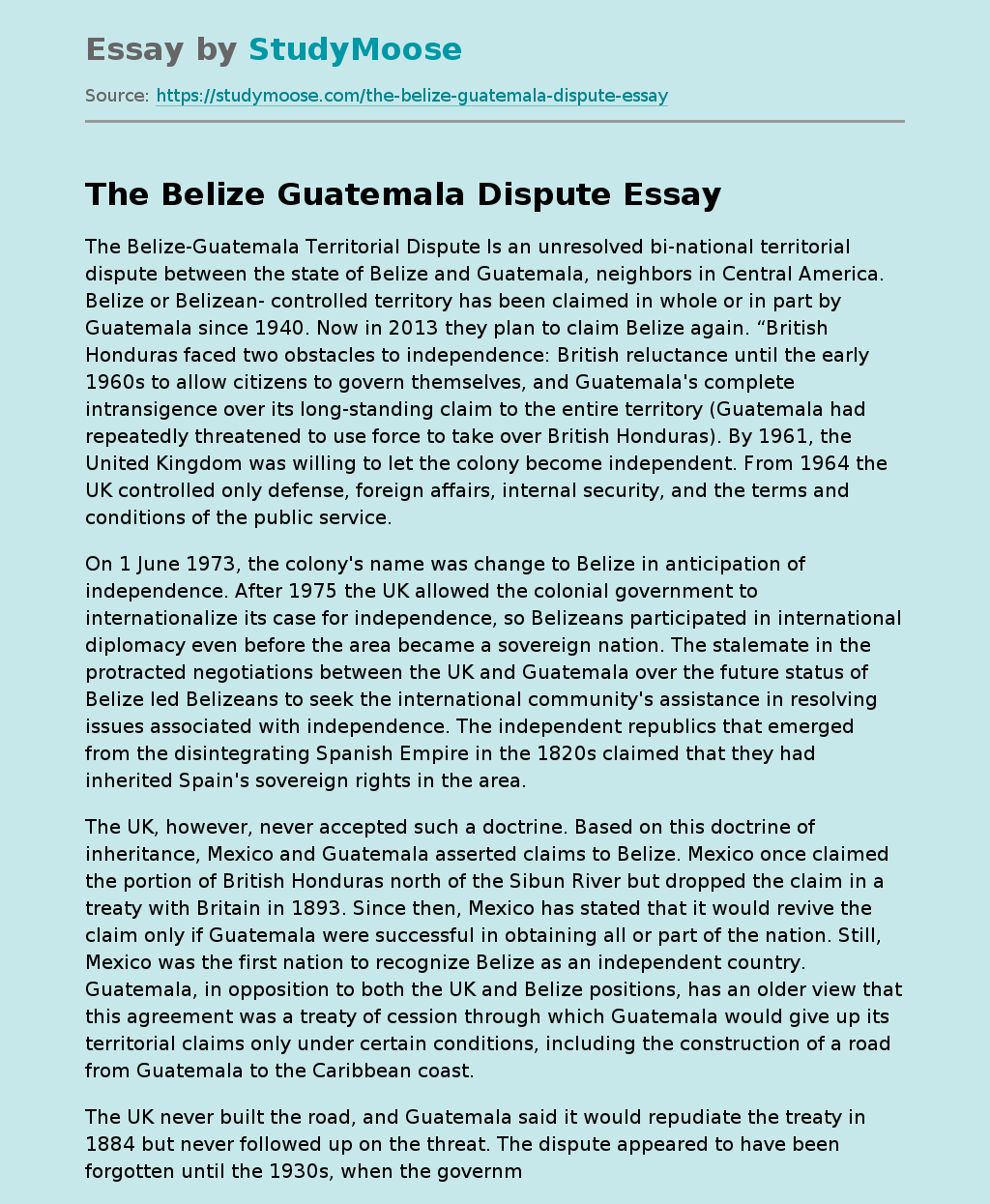