The case study refers to two business partners, Tom and Sue who deal in the purchase and renovation of homes and apartment buildings. The bone of contention between them is a piece of land that Sue was interested in buying but about which Tom was apprehensive. Tom agreed to buy the property after a delay of some days but unknown to him, Sue had purchased the property in her own name and is now refusing to transfer it in the partnership’s name regardless of Tom’s continued insistence.

Don't use plagiarized sources. Get your custom essay on
“ Dispute Resolution Essay ”
Get custom paper
NEW! smart matching with writer

In deciding whether Tom should pursue this dispute, there are three major questions to be answered here which are whether Tom is justified in wanting to proceed with a lawsuit and which type of dispute resolutions between mediation or arbitration will be more effective over here. First of all, a partnership is defined in legal jargon as:

“A type of unincorporated business organization in which multiple individuals, called general partners, manage the business and are equally liable for its debts; other individuals called limited partners may invest but not be directly involved in management and are liable only to the extent of their investments(Goldman , 2006).

Unlike a Limited Liability Company or a corporation, in a partnership each partner shares equal responsibility for the company’s profits and losses, and its debts and liabilities.

” One of the agreements that partners make when entering in a partnership is to share all profits and losses equally or in the proportion decided. If Sue has bought the property in her own name and subsequently through their business Tom and Sue make a profit on it, the profit will only go to Sue.

This is unfair and can be seen in a court of law as a violation of one of the basic partnership agreement rules.

Tom’s actions, if he proceeds with the lawsuit will be quite justifiable. On the other hand, a lawsuit may not only be time consuming and costly, but may also besmirch the partnership name which may prove to be disastrous for the partnership name. Remember, property buying is usually seen as big investments by customers and they prefer to deal with trusted and good reputation dealers. Arbitration is a good option over here for Tom.

Arbitration is defined in the dictionary as: “…a form of alternative dispute resolution or a legal technique for the resolution of disputes outside the courts, wherein the parties to a dispute refer it to one or more persons (the “arbitrators”, “arbiters” or “arbitral tribunal”), by whose decision (the “award”) they agree to be bound. It is a settlement technique in which a third party reviews the case and imposes a decision that is legally binding for both sides. ”

In simpler words, it is when parties agree to settle their disputes not in court but through an independent arbitrator, whose decision, as agreed by both parties in advance, is to be final and binding. It has a number of advantages over fighting out a case in court form which Tom would certainly benefit. These include it being a less expensive and faster option. Also, arbitrators usually have a certain degree of expertise in the case being discussed and can reach more plausible solutions.

The arbitration proceedings can be kept secret in most cases (and this would certainly help Tom and Sue’s business in this case) and the time spent in appealing is usually cut down. But when deciding to go for arbitration, its disadvantages should also be kept in mind by Tom. Opting for arbitration means parties generally waive the right to be heard in a legal court-that is if they want a court of law to address their issues if they are for any reason unhappy with the decision of the arbitrator, they cannot do that.

In addition to legal fees, parties may have to pay the arbitrator which may dissuade small businesses from this type of dispute resolution. As the appeal system is very rare, an incorrect decision may be difficult to overturn. Also, even if arbitration is a cheaper option than going to a court of law, sometimes multiple arbitrators sit in a panel and if they cannot juggle their dates around, long delays may result. Some people are also apprehensive of this type of dispute resolution because they believe that discovery is not as through.

Though Sue and Tom can be assumed to be based in the United States of America-where arbitration decisions carry the same weight and penalties of non-enforcement as court decisions-in many countries, that is not the case where decisions settled through arbitration may take a backseat. The other option available to Tom is another type of dispute resolution, namely mediation. It is simply defined in the dictionary as: “…a process in which a third-party neutral assists in resolving a dispute between two or more other parties. It is a non-adversarial approach to conflict resolution.

The role of the mediator is to facilitate communication between the parties, assist them in focusing on the real issues of the dispute, and generate options that meet the interests or needs of all relevant parties in an effort to resolve the conflict”. The main difference between arbitration and mediation is that a mediator, unlike an arbitrator who plays a similar role to a judge, helps and encourages parties to reach a solution between them. A mediation is termed top be successful when the parties involved reach a mutually acceptable agreement. Mediation works very simply.

For Tom and Sue, the mediator will present the facts to them thorough an impartial view, urge them to adopt an objective outlook and then decide what they would have done had they been in the other parties’ shoes. Mediators are often trained in their art. Mediation has advantages like every other option such as that it encourages relationships to improve between parties who will in the future be coming into contact with each other, can be used in wide ranging issues form divorce proceedings to international conflicts and also makes parties learn how best to handle relationships.

It has its share of disadvantages, the principle one being that even mediators are after all only human which leave them open to biases and prejudices which can just further the blame game between two parties if one feels the other has been treated in a more favorable manner. Summing up my case, I feel Tom should drop the idea of a lawsuit and look into the two types of dispute resolutions.

This is principally for the reason that a lawsuit may attract a lot of unwanted publicity which may not be in the best interests of the business and if Tom and Sue still plan to work together, it could make the functioning of two of them as partners not very smooth. Tom should instead opt for either mediation or arbitration. Mediation in my opinion is the better option over here because assuming that the partnership will still continue after this dispute is resolved and the case study makes no mention to the contrary, it will be a less confrontational way of handling the whole situation.

If mediation is successful, the relationship between the tow partners will not sour and if Sue is convinced of the unfairness of her action, all should end well. On the other hand, arbitration may be preferable if both parties agree to bind by the arbitrator’s decision without any rancor in their future dealings together which is often easier said then done. Therefore, under such circumstances, mediation remains the best and most friendly option. . References Book Goldman, A. J. (2006). Business Law. USA. 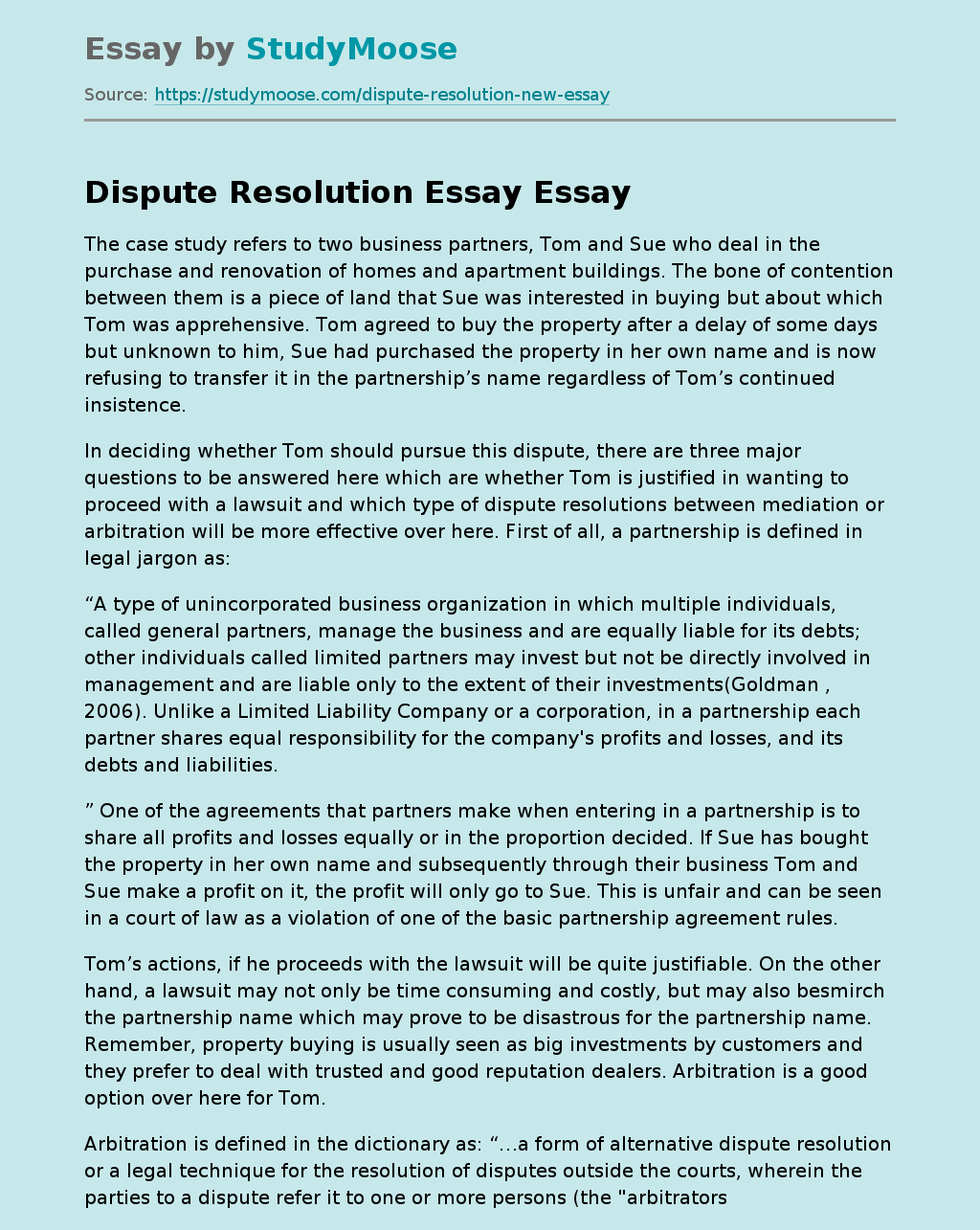