Alternative Dispute Resolution (ADR) is an important part of a court’s structure in that it allows disputes to be resolved without the need for litigation or further legal action. This paper will discuss the benefits of using ADR within the workplace and will also address the many forms of ADR that can be chosen based on what would best fit the dispute. This paper will also provide an example of the use of ADR in the workplace and how the dispute was handled and resolved.

Don't use plagiarized sources. Get your custom essay on
“ Alternative Dispute Resolution ”
Get custom paper
NEW! smart matching with writer

It will also discuss how ADR avoided further litigation.

Alternative Dispute ResolutionAlternative dispute resolution (ADR) encourages the settlement of a dispute between parties in a less formal atmosphere than a court room with the assistance of a third party, often called a mediator. “Alternative Dispute Resolution (ADR) is a process in which a third neutral party assists in resolving disputes by using various techniques to reach a resolution acceptable to the parties” (The U.S. Equal Employment Opportunity Commission, 2005).Unlike litigation ADR is based upon the notion of an early settlement agreement, which aims at increased participation and increased control for the parties who are involved. Given the continually increasing costs of litigation in terms of money, time and resources, organizations are increasingly showing a preference towards alternative dispute resolution.

Options for ADRAlternative dispute resolution has many forms in which the parties in a case may choose to use. “The most common form of ADR is arbitration. Other forms of ADR are mediation, conciliation, minitrial, fact-finding, and a judicial referee” (Cheeseman, 2004, p.

41). Arbitration involves a third party, called the arbitrator who is a neutral party to both sides. During ADR the arbitrator listens to each side and makes a decision that is known as a reward, which both parties will hopefully agree on. The benefits of arbitration is that it is the least expensive and less time consuming then going to court.

Other forms of ADR have similar benefits. Mediation and Conciliation also involves two parties and a mediator. The mediator will address the situation and try to decide on an agreement that the two parties will accept. If they do not accept they will have to go to court. A minitrial also involves a neutral party, who is frequently a retired judge. The two parties having the dispute will present their cases to the neutral party separately and meet after the presentation to settle their claims.

Fact-finding occurs when a neutral party is hired to investigate the disputing claims. They will then report to the other party about his or her findings. After reporting, the neutral party will make a recommendation of what settlement may occur. With this use of a Judicial Referee, a private trial can be conducted and the referee can make a decision.

Dispute in the OrganizationLarge organizations, such as a pharmaceutical corporation are showing a preference towards alternative dispute resolution due to the increasing litigation costs. With so many employees from all different backgrounds the chance of a major conflict is inevitable. In order to handle a situation between employees, ADR was introduced by the human resource department as a way to resolve conflict without having to take the issue any further then the mediation room. “The main advantage of mediation is that all associated documents and communications are kept confidential. Mediation also allows both parties to reach an amicable outcome. It encourages creativity in the resolution process. Mediation has an 80 percent success rate” (Erickson, 2006).

Addressing the IssueAn example of the ADR that the pharmaceutical company faced was when one employee accused another of sexual harassment. Instead of filing charges and going to court it was decided to use mediation, to save time, money, and be less stressful for both the parties. The mediator is the neutral advisory of both parties. He or she will let the two parties know their options on settling and advises the parties on the outcome if they should choose to go to court. It is the mediator’s responsibility to try to have an agreement settled between the parties involved.

In this case a woman was accused of sexual harassment against a male co-worker. They had worked in the same department, dated each other and the relationship ended on bad terms. The woman was accused of stalking and harassment both inside and outside of the workplace. The male was also accused of harassment and would not return any belongings that he had of the woman’s. They both were also logging into each others files and emails in order to gain information to use against each other. Both parties chose to use an alternative dispute resolution to come to an agreement. The parties chose the ADR form, mediation. They needed to come to a settlement agreement because both parties were in danger of losing their jobs. They chose mediation because they wanted to avoid the publicity that would have occurred with going to the courts to settle the case. They were also avoiding the high costs in legal fees and time lost at work while in court.

Once in the mediation room, the mediator listened to both sides, looked at all evidence, such as communication between the parties and harassment details, and made recommendations on what an agreement could include. Both parties then came to an agreement based on the suggestion of the mediator. “Being able to settle without litigation saved both parties the “emotional and the financial costs of litigation that are so destructive of the relationship” (Reed, et. al., 2005, p 115). It was agreed that the female party would change positions to another location, and that she would have her belongings returned to her. Both parties agreed to have no communication between each other and would receive new secure information, such as accounts and phone numbers.

The legal and regulatory environment of business, 13th Edition. 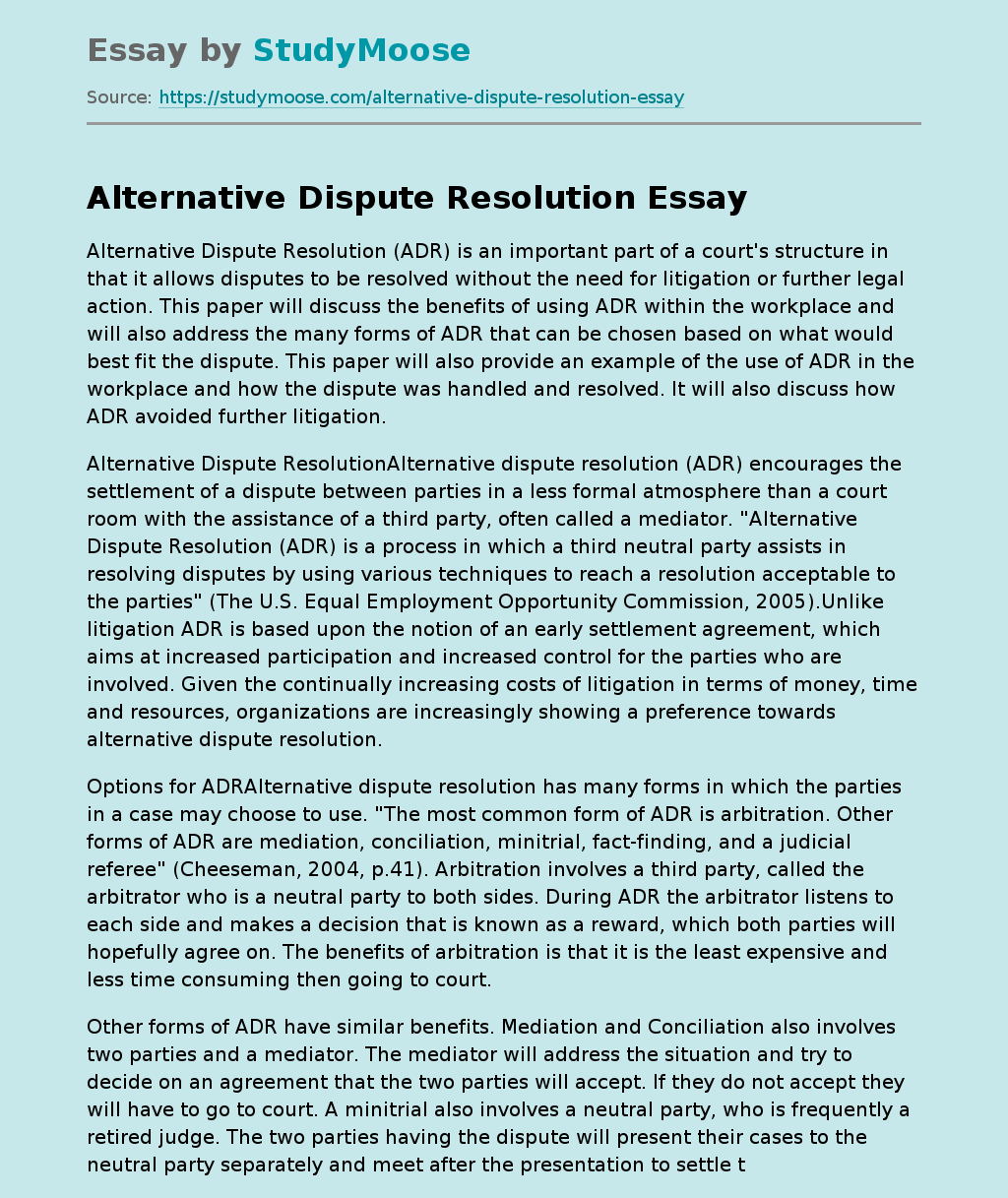