Has the Earth’s climate changed more than we realize? Our whole planet has been affected. We need to start doing something before these affects become worse. Many people don’t even realize the threats these effects can have on the planet, simply because of the lack of promotion of this issue. This essay will prove that climate change affects need to be more promoted around the world.

We can see these effects in many different ways one of them being the warming oceans.

Don't use plagiarized sources. Get your custom essay on
“ Climate Change on Earth ”
Get custom paper
NEW! smart matching with writer

The top 700 meters of the ocean has been found to have increased 0.4 degrees fahrenheit since 1969. This raised temperature in the ocean is causing problems you probably never even thought about, like the melting underside of the Antarctic ice shelves.

Another effect is the rise in average temperature change over time. The earth has had a rise of about 1.62 degrees fahrenheit since the 19th century. Much of this heat increase is cause by the carbon dioxide we produce.

With this we have seen the top 5 hottest years on record since 2010.

All of these effects are being caused by gases we are putting into the atmosphere like carbon dioxide, methane, water vapor, and nitrous oxide.

These gases are being put into the the atmosphere many ways one being our large use of fossil fuels releasing carbon dioxide and methane into the air. Another big cause is deforestation largely affecting our amount of oxygen compared to carbon dioxide present.

Carbon dioxide has had a very large increase since the industrial revolution increasing by more than a third since the start. Humans have largely impacted that through natural ways like respiration and volcano explosions. We have also impacted it by the deforestation, the large use of fossil fuels, and the land use changes.

Another important increased gas is nitrous oxide. This gas is what they consider to be a “powerful greenhouse gas”. This gas is mainly produced by soil cultivation practices. The majority being produced by the use of commercial and organic fertilizers, and through the use of fossil fuel combustion, nitric acid production, and biomass burning.

This increase in heat is something that needs to be fixed before effects get even worse. All of these effects will only start to worsen without change. You will see this change as heat will rise even more, and we will lose more and more fresh water everyday due to the melting ice shelves.

Another one of these huge changes is the much stronger and more intense hurricanes that will keep coming. We have seen a major increase in the frequency of category 4 to 5 hurricanes since the 1980’s. Due to the effects of rising heat because of the things we are doing this increase will only worsen.

Rising sea levels will be another effect of the heat. The sea level has already risen over 8 inches since first recorded in 1880. With effects only getting worse with a projected rise of 1 to 4 feet by 2100. This rise obviously being caused by the melting ice shelves.

With all of that said there are some solutions we are approaching and can start to do. There are many of different we can do one of them just simply awareness and spreading this information to others. Another big thing we can do is just simply living greener, or recycle. Although there is only so much we can do, but supporting things like renewable energy, and cleaner fossil fuel use is a step in the right direction.

To get started raising awareness there are a couple different things that you can do. One of the easiest ways you could start is just by sharing this paper to others for them to read themselves. Although you could also inform people yourself using data from this article, or other reliable sources to help spread awareness.

There is some other big things we can do to help one being living greener. That mean much more than just recycling water bottles, or cans. It means recycling paper, cans, and bottles working to throw away and waste less. It also means doing things like reducing water use, and car use or even getting an electric car. Going green means conserving resources and using more renewable energy.

To start supporting renewable energy there are many things you can do. One of these things is by having renewable heat and cooling (RHC). RHC uses cleaner renewable resources which reduces emissions and air pollutants. You can also make sure that your house is properly insulated and sealed. This will reduce the use and cost of heating and cooling your home.

All of this is just a little bit on how earth’s climate has changed over the years. The whole planet is being affected by all these things all the time and it will only get worse. Climate is intensifying storms, melting ice shelves, and so much more. All of this important because we can change things and starts with you helping. 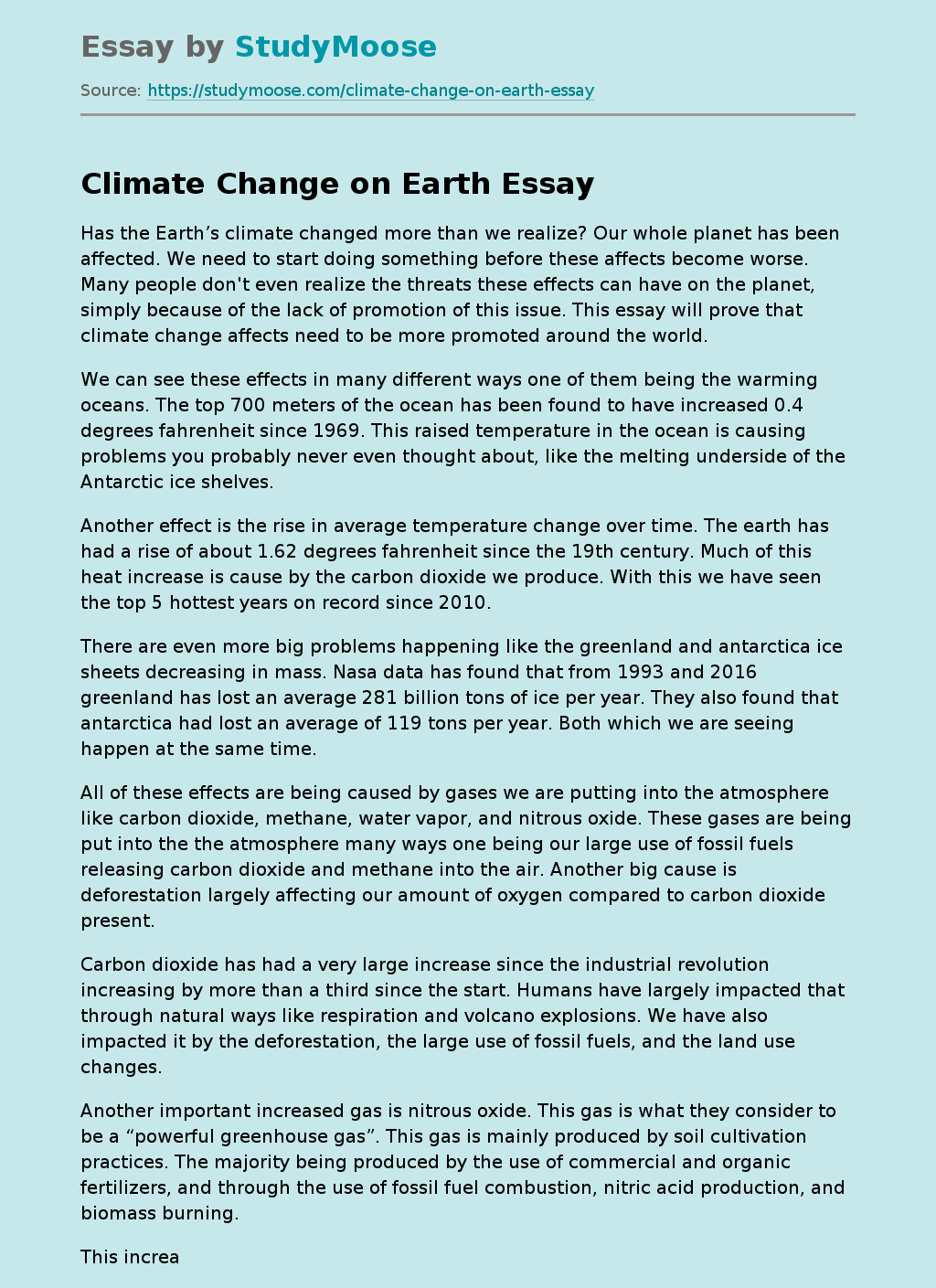