For this paper, I will explore the ethical issues in Psychology, more specifically the violation of basic human rights in the example of the Stanford Prison Experiment. The following questions will be addressed: Was the Stanford Prison Experiment worth the consequences it had on the participants? Was it morally right to put the participants in these conditions without their full consent? I will first begin by discussing the experiment and then explain how it was conducted. I will also briefly explain the American Psychological Association guidelines relevant to this example using three of their APA codes: beneficence, autonomy and justice.

Don't use plagiarized sources. Get your custom essay on
“ Immanuel Kant and American Psychological Association ”
Get custom paper
NEW! smart matching with writer

Finally, I will present my point of view on the ethics of this experiment, which is derived from both theories such that I believe that the findings of the experiment can morally justify the actions that Zimbardo permitted the prison experiment. First of all, what are human rights? As stated by Murthy (2010) human rights are: “another basis for making ethical judgments. The most basic human rights are to have claims or entitlements that enable; a person to survive, to make free choices, to realize one’s potential as a human being (a right means that a person or a group is entitled to do something or entitled to be treated in a certain way).

” The Stanford Prison Experiment was a violation of human rights because the prisoners’ rights were revoked. The Stanford Prison experiment took place in 1971 by Professor Philip Zimbardo. This experiment was held at Stanford University. The aim of this study was “to investigate how readily people would conform to the roles of guard and prisoner in a role-playing exercise that simulated prison life (McLeod, 2008). ” The men that were chosen to do this experiment went through a series of tests. Zimbardo chose twenty-four participants that were randomly assigned to the role of guard or prisoner.

This experiment would last two weeks and each man would be paid 15$ a day. The guards were the first to have a meeting and were told to keep order in the prison. They were also given uniforms and mirror-reflective sunglasses. The prisoners were, on the other hand, arrested without notice at their home were strip-searched without consent. They were to wear white robes and had a chain to their ankle. Within a very short period of time the participants started to settle into their roles. The guards quickly became more authoritative and also sadistic, they started to harass the prisoners and became very violent.

They were enjoying their role of power. The prisoners became more submissive. After thirty-six hours, one prisoner had to leave the institution because he started to “have uncontrollable bursts of screaming, crying and anger; his thinking became disorganized and he appeared to be entering in the early stages of deep depression (McLeod, 2008). ” Following this episode, more and more prisoners started to show signs of depression. The experiment that was supposed to last fourteen days ended after six. The American Psychological Association is the largest organization representing psychology in the United States and Canada (APA, 2013).

The mission of these psychologists is to “advance the creation, communication and application of psychological knowledge to benefit society and improve people’s lives (APA, 2013). The APA has a set of five major guidelines in their ethics code, which are: beneficence, fidelity and responsibility, integrity, justice and respect for people’s rights and dignity (autonomy). In the case of the Stanford Prison Experiment, some of the principles such as beneficence, justice and autonomy were not put into effect.

“Beneficence means to maximize benefits and minimize harm (Shaugnessy et al. , 2006 quoted by Xavier, 2013). ” Zimbardo did not try to minimize harm because although the prisoners were humiliated, in distress and experiencing psychological stress, it took six days for the experiment to shut down. “Justice means fairness in receiving the benefits of research in addition to accepting the risks (Shaugnessy et al. , 2006 quoted by Xavier, 2013). ” Here justice was not respected because the participants did not consent to the full experiment.

They weren’t properly informed about what really was going to take place in the prison and therefore did not make a decision on the entirety of the facts. “Autonomy (or respect for people’s rights and dignity) implying respect for individuals was not present (Shaugnessy et al. , 2006 quoted by Xavier, 2013). People’s rights and dignity were not taken into account. The dehumanizing process began at the beginning of the experiment, when prisoners were instructed to strip naked and accelerated from then on. If this experiment were to be done in today’s society, it would be turned down.

“If modern guidelines were followed, the Stanford Prison Experiment would never have been allowed to take place as it would constitute a serious branch of ethics in accordance to the guidelines of the American Psychological Association, not least because of the fact Zimbardo and his fellow researchers failed to respect the rights of their participants by failing to tell them exactly what they were getting themselves in too (Burgemeester, 2011). ” From a Kantian point of view, can we morally justify the actions by Dr. Zimbardo in the Stanford prison experiment?

The answer to this question is in Kant’s Categorical Imperative. Kant’s second Categorical Imperative states that “So act that you use humanity, whether in your own person or in the person of any other, always at the same time as an end, never means” which in basic terms means “don’t use people”. It is important to remember that Kant believed that human beings have a special dignity because of their rational nature and that therefore humans deserve a special kind of respect (Van Der Wee, 2013). When taking the example of the Stanford prison experiment, many of the participants’ human rights were not respected.

First of all, the prisoners were arrested at their homes, without notice. They were brought to a police station where they had their fingerprints and photographs taken. They were then blindfolded and driven to the Stanford prison where they were stripped naked and then put in a cell. This is a perfect representation of how the prisoners’ were striped of their rights. They had not in anyway consented to this: “Participants were deceived; an example would be that their consent forms were not complete and did not properly address all that would take place (Shaugnessy et al., 2006 quoted by Xavier, 2013). ” After a day in the prison, the participants already started to take their roles more seriously.

The prisoners were more submissive and the guards were more aggressive: “It was not long before the situation rapidly worsened as the behavior of the prison guards became increasingly sadistic and more prisoners succumbed to psychological stress (Burgemeester, 2011). ” Prisoners wanted to leave the experiment but weren’t allowed to: “Several of his participants requested withdrawal numerous times, but he discouraged this and almost forced them to carry on (Zuczka, 2012).

” Although the experiment was supposed to last fourteen days, it was stopped after six. Many researchers wonder why it was not stopped after the first time a prisoner was beaten. References Alkadry, M. G. , & Witt, M. T. (2009). Abu Ghraib and the Normalization of Torture and Hate. Public Integrity, 11(2), 135-153. American Psychologists Association. (n. d. ). Ethical Principles of Psychologists and Code of Conduct. American Psychological Association (APA). Retrieved April 29, 2013, from http://www. apa. org/ethics/code/index. aspx? item=3 Burgemeester, A. (2011, June 21).

What are the Zimbardo Prison Experiment Ethical Issues? | What is Psychology?. What is Psychology? |. Retrieved May 1, 2013, from http://whatispsychology. net/what-are-the-zimbardo-prison-experiment-ethical-issues/ Cherry, K. (n. d. ). The Stanford Prison Experiment – Overview of the Stanford Prison Experiment. Psychology – Complete Guide to Psychology for Students, Educators & Enthusiasts. Retrieved May 1, 2013, from http://psychology. about. com/od/classicpsychologystudies/a/stanford-prison-experiment. htm Dreifus, C. (2007, April 3). Finding Hope in Knowing the Universal Capacity for Evil. 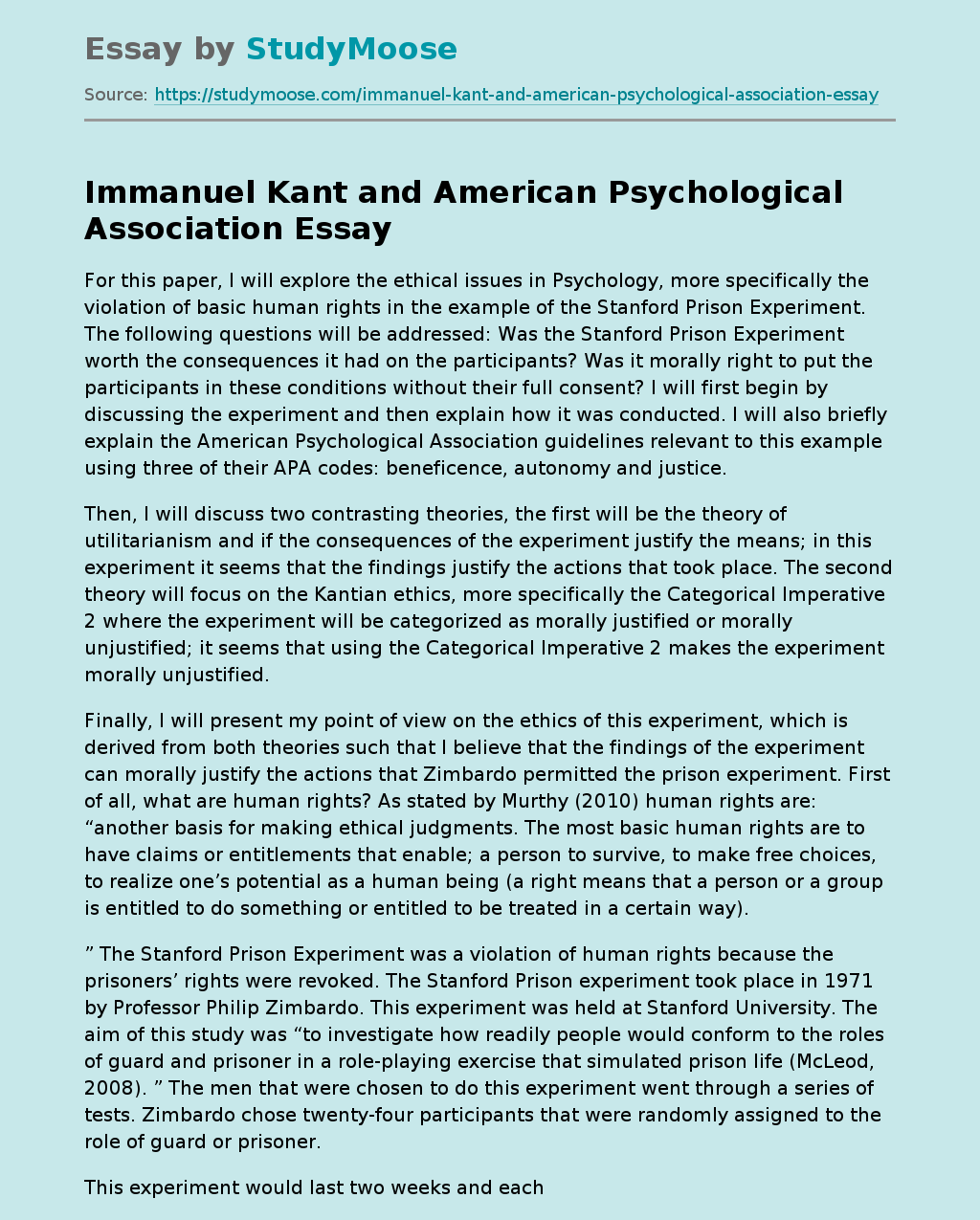