Kant and Utiliarianism on Sweatshops

By definition a sweatshop is a “negatively connoted term for any working environment considered to be unacceptably difficult or dangerous. Sweatshop workers often work long hours for very low pay in horrible conditions, regardless of laws mandating overtime pay and or minimum wage”. Many corporations in the United States use sweatshop labor in countries over seas such as China to produce their products at a lower cost. As entailed in the letter from a man born in China, many citizens on these countries resort to factory labor to support themselves to escape other sources on income such as prostitution.

Don't use plagiarized sources. Get your custom essay on
“ Kant and Utiliarianism on Sweatshops ”
Get custom paper
NEW! smart matching with writer

Without these corporations usage of oversea sweatshops these employees would be forced to return to self-demeaning jobs such as these. However, does the mere fact that overseas factory labor is allowing these people to support themselves and their families provide moral justification for the poor work conditions, and low wages that sweatshop labor provides? German philosopher Immanuel Kant would argue that there must be changes made in the politics of sweatshops to improve there conditions.

Using his idea of the “Categorical Imperative” and treating people as “valuable in themselves” Kant would not completely take away the opportunity for these people to support themselves working in factories but make it a more humane system. Utilitarian philosophy would identify the good that these sweatshops are providing for the people overseas, and recognize the harm that could be caused to their lives by removing the sweatshops. Trying to create the most human happiness and prevent suffering a Utilitarian would suggest the continuation of sweatshops overseas with the implementations of better conditions and wages for the employees.

Using the ideas of Kant, and the views of utilitarian philosophy, a CEO of a United States corporation could not only identify the positive opportunity these factories provide for poor citizens overseas but also the necessity for the improvement of working conditions and wages. Philosopher Immanuel Kant believes in a “Categorical Imperative” that entails we should act in such a way that we can rationalize our actions into a universal law.

Kant provides a more specific explanation of this imperative and states; “Act so that you use humanity, as much as in your own person as in the person of every other, always at the same time and never merely as a means” (Audi, 17). Kantian ethics argues that each person should be treated as valuable and should never be used simply to satisfy the needs of others. Kant would not believe that the ability for sweatshop workers to avoid other “jobs” to receive income is a morally justifiably excuse for oversea factories to exploit workers.

Forcing sweatshop employees to work long, exhausting, dangerous shifts for low wages is not treating them as valuable. “Treating people as ends clearly requires caring about their good. They matter as persons and we must at times and to some extent act for their sake, whether or not we benefit from it” (Audi, 17). If a company could raise sweatshop wages, therefore increasing the standard of living for these workers and only experience a 3% profit decrease, they should do it. U. S corporations that use sweatshops across seas are providing employment for poor citizens, however Kant would argue that these people are being used and “We are never to use people- including low-level, readily replaceable employees” (Audi, 17).

Kant would see the positive implications sweatshops provide, but he would argue that these corporations need to demonstrate they truly care about the “good” of these “valuable” people. Utilitarianism argues that one should “choose the act from among your options which is best from the twin points of view of increasing human happiness and reducing human suffering” (Audi, 12).

The main idea behind this standpoint is to act in such a way that maximizes human pleasure, and provides the least suffering to others. The complete removal of sweatshop factories from foreign countries would have a harsh affect on the lives of citizens overseas. These once factory employed people would have to return to other harsher forms of “jobs” such as prostitution. From this angle a utilitarianism would argue that these sweatshops are in fact creating a stipend of human happiness in these countries and preventing them from certain forms of suffering.

However, when it comes to the horrible working conditions and low wages of sweatshops, and U. S corporations unwillingness to change these factors in exchange of profit decreases as low as 3% a utilitarianism would not see view this to be ethical. Increasing the wage of these employees by even the slightest amount could greatly increase their standard of living. Perhaps increasing a father’s wage could allow for his kindergarten age children to cut back the hours they are forced to work in the same sweatshops.

On the other hand, this increase would result in a slight decrease of profit for the corporation that could easily be made up for by cutting other annual expenses. According to utilitarianism “If one act produces more happiness than other, it is preferable”(Audi, 12). In this case the improvement of conditions and the overall humanity of working in sweatshops creates a greater amount of happiness versus the corporations 3% of suffering, therefore changes should be made to improve these factories.

If I were the CEO of this U. S Corporation I would use a combination of both Kantian and Utilitarian ethics to approach this ethical dilemma. I strongly agree with the valuable, as well as the utilitarian aspects of maximizing human happiness. In this case the CEO decided to continue sweatshop labor as it is, choosing not to improve conditions or wages, unwilling to receive a 3 % reduction of product profit. If I were the CEO I would chose to improve conditions in order to create the least amount of human suffering, ignoring the profit decrease and caring for the well being of employees.

Although these oversea sweatshops offer labor to the lower class, it is not ethical to treat these people as replaceable objects in the production process. In order for these large corporations to continue the usage of sweatshop labor while valuing the employees as people, the conditions of their factories must be improved. Factory conditions should be made safer, and hours should be reduced, and there should be an increase of wage improvement. The slightest improvement of these conditions could greatly improve the lifestyle of these employees and lead to an overall increase in their ability to live happily.

Some may argue that the fact that sweatshops are providing people with forms of employment other than demeaning jobs such as prostitution, morally justifies the harsh conditions and low wages the employees receive. In this scenario, the CEO chooses to morally justify his decision to not change conditions because they are providing employment and are completely legal. Although these factories are providing these citizens with income, the conditions in which they are working are inhumane. People of any class should not have to escape things such as prostitution, to other forms of employment with systems that are just as demeaning.

In order for sweatshops to ethically provide employment for people of any country, conditions must be improved. If these factories continue to force workers to work in these unacceptable conditions and for the minimal wages they are currently receiving, they are no more humane than the necessity of these citizens to sell their body in order to survive. Kantian, and Utilitarian ethics both can identify the positive aspects of oversea sweatshops for the poor citizens who are able to support themselves through this factory employment. However, each standpoint recognizes the importance of increasing the working conditions and wages provided.

Kant provides moral justifications of treating all humans as “valuable”, out ruling the exploitation of these factory workers. According to Kant these indivuals all matter as people, and corporations must act to better them even if they are not benefiting as a company. Utilitarianism works to create the most amount of human pleasure and avoid human suffering. A utilitarian identifies the human happiness created by sweatshop in terms of a more “humane” form of income than other options for employees but demands the improvement of conditions to create the least amount of suffering.

As CEO of a U. S corporation it is important to understand why these poor citizens of oversea countries are so voluntary to accept jobs working in sweatshops and not allow the fact that factories provide them with income to morally justify the inhuman ways they are being treated. By ethically examining the conditions of factories, wages, and living wages of these countries, it is possible for U. S corporations to use oversea sweatshops without unethically taking advantage and exploiting workers, benefiting both production processes and employees. 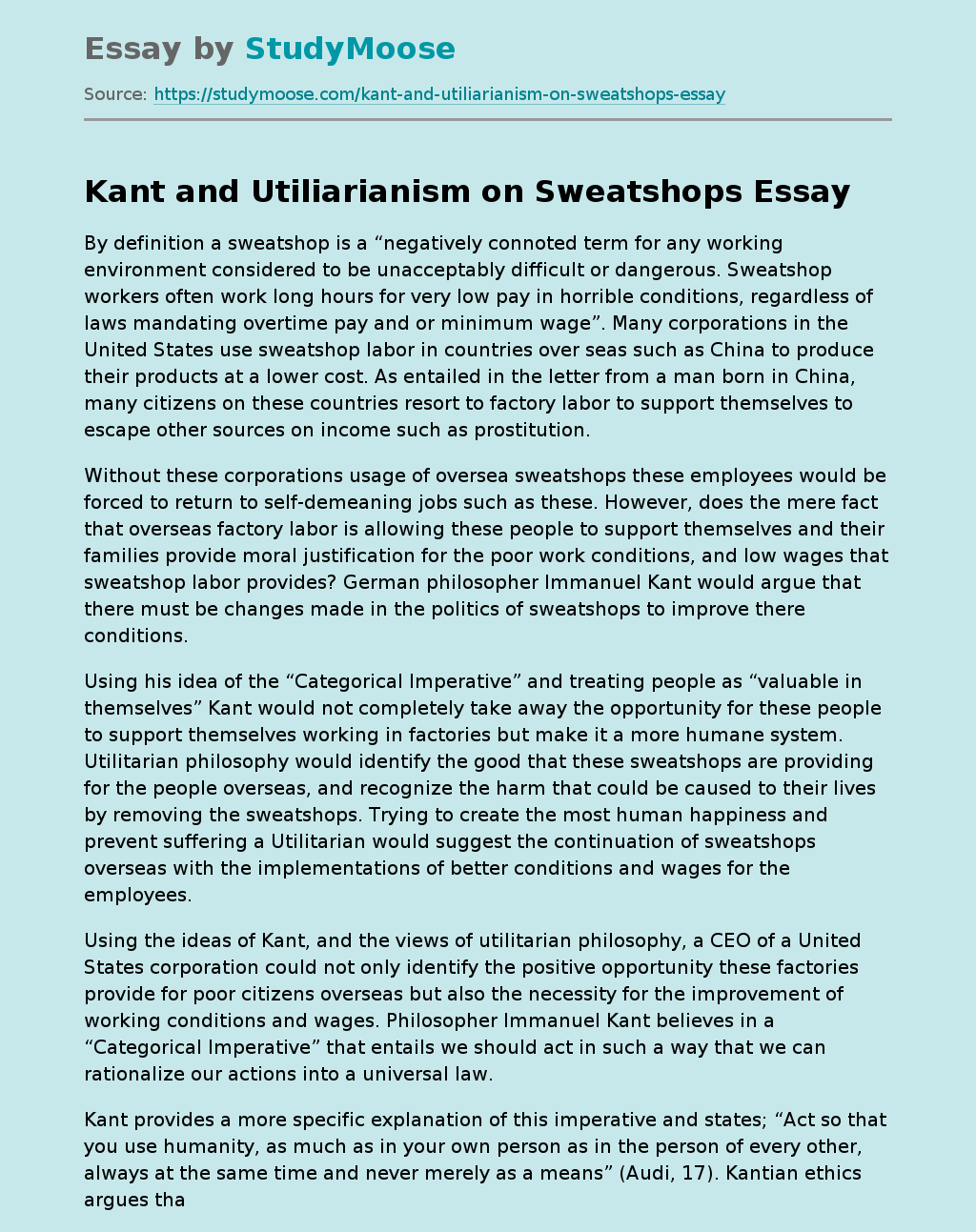