The Humanity Formula makes it clear that we should never treat others, or ourselves, as means only; rather, we should deem humanity to be an end in itself. Kant makes it clear that respect for others is crucial to our humanity and this is the backbone for the formula. While the formula does make it clear that the previous statement is true, it does not rule out the idea of using others as means to our own ends. It would be crazy to ask human beings to not do this considering it is done on a daily basis; people use other people to get what they want and desire.

Don't use plagiarized sources. Get your custom essay on
“ The Humanity Formula ”
Get custom paper
NEW! smart matching with writer

The economy is solely built on the idea of trade with one another, as Adam Smith explains, so using one another is needed. However, Kant explains that a person’s humanity must be treated as an end in itself and not simply as a stepping stone for achieving something higher.

The Humanity Formula also stresses the distinction between human beings and humanity.

It is the humanity in the human beings that must be treated as ends in themselves because that is what makes us distinguishable from other beings. Our rational capacities are what makes us able to recognize the importance of treating one another’s humanity as an end in itself. If we behave in such a way to restricts one from consenting or utilizing their rational capacities, then we are using their humanity as a mean only and not as an end.

He connects this with the understanding of an end as having three senses; two positive, and one negative. An end in a positive sense leads one to produce something and rationally pushes their actions to aim towards that goal to achieve that end. An end in a negative sense is something that limits what one does in pursuit of other ends; it is the source of perfect duties because it is something you don’t challenge when pursuing positive ends.

Humanity is an end in a negative sense because it is objective and is an end that every human being must possess. Humanity places restrictions on what one is morally allowed to do when pursuing other ends because it must be cultivated and treated as an end in itself. Kant argues that when human beings make humanity one’s end, one pursues it and develops it. To perfect the humanity in others, one will seek to further the ends of others humanity in which they have freely chosen for themselves. Lastly, Kant argues that the Humanity Formula involves respect for the humanity of others. We are to respect other people simply because they are human beings; this requires us to regard them as such. We are not supposed to respect them because they have met some achievement or earned a title. Rather, we respect them because they are human beings who are unable to lose their humanity based off of wrong doings. They are rational human beings and should be treated as such, according to Kant. Human worth requires respect. 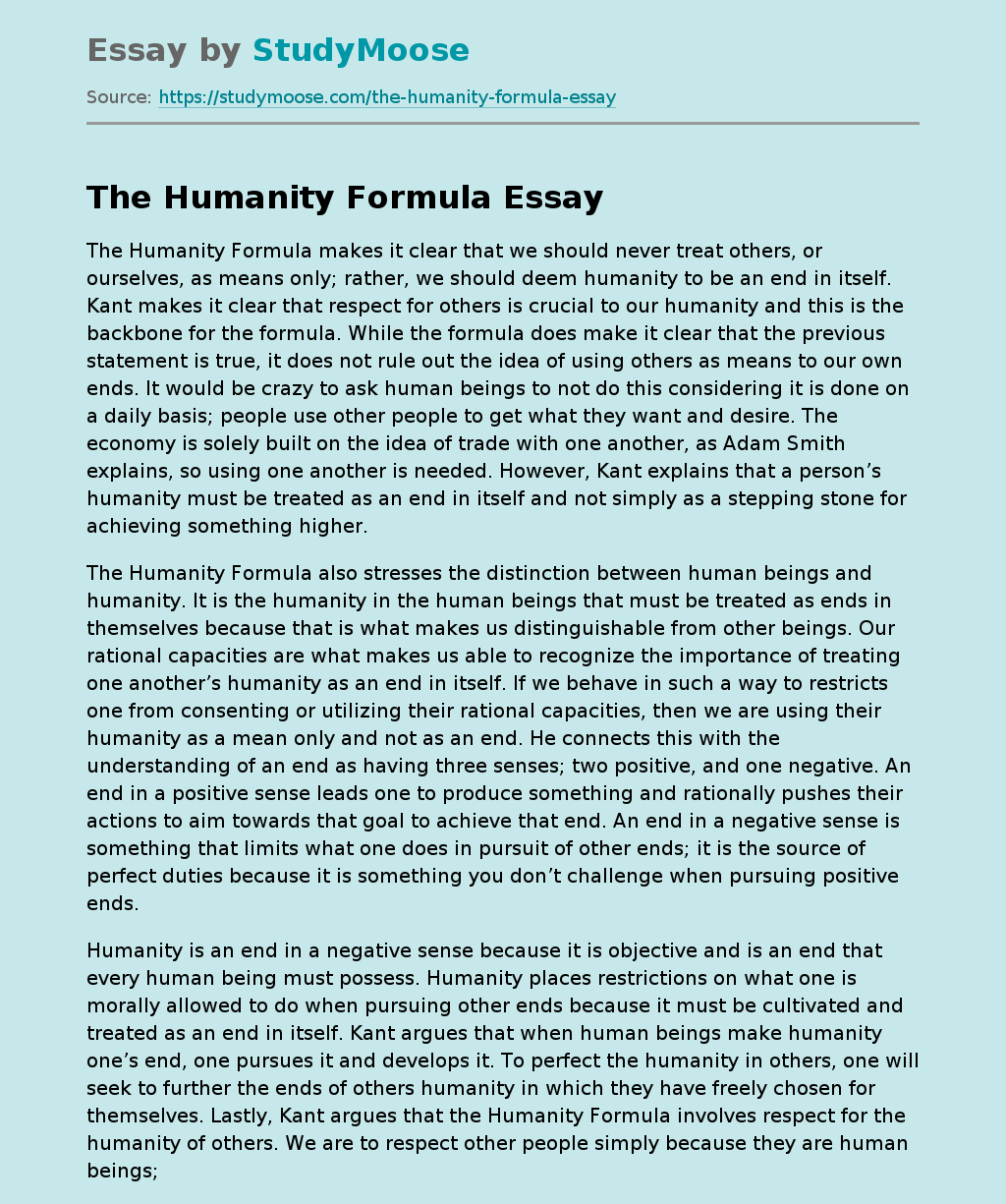