Every event or accident a person does happens by some type of motivation, whether good or bad. Regardless of the intention, there are two types of motivation Intrinsic and Extrinsic Motivation. Intrinsic is being motivated by self-satisfaction, and an external reward drives extrinsic. In the memoir The Other Wes Moore by Wes Moore, there are a series of events or incidents in the second half of the book that displays that variety of motivation that exists. Having read the book, one may argue that the author Wes Moore was motivated by more intrinsic drive, whereas the other Wes was motivated more by an external drive.

Don't use plagiarized sources. Get your custom essay on
“ Intrinsic and Extrinsic Motivation in “The Other Wes Moore” by Wes Moore ”
Get custom paper
NEW! smart matching with writer

The Other Wes Moore is the life of two boys with the same name but two different fates and is filled with fighting conflicts and murder. They are showing how they both had very different lives even though they lived in the same town. One becomes a veterinarian, and the other goes to prison for life because of murder.

The Other Wes Moore and the author our most affected by Intrinsic factors because of how both of them were raised. Unfortunately, losing both their fathers at a young age. It is much harder without a father figure and can be difficult with no idea of how to start your life out. This emotional experience can make you choose the wrong path And make bad decisions. The author shows how their lives were so similar but so different at the same time on how they acted, or they handled their emotions, and that Is why their lives turned out so differently.

The author Wes, when first being forced into military school by his mom he was very excited to go back to his home and tried everything he could to make it back to his home, throughout a couple of years that idea started to change. “I was now a platoon sergeant, a cadet master sergeant, and the youngest senior noncommissioned officer in the entire corps. Three years ago, I’d been one of the insubordinate kids first entering the gates of Valley Forge. In an ironic turn, I was now one of the ones in charge of them” (115). One can see the dramatic change in the author’s motivation, he once upon a time had intrinsic motivation due to where he used to live and his surroundings, now he’s eager to progress in the military with strictly intrinsic motivation, with the plus of the intrinsic motivation of making his mother happy, but he mostly did it for himself. The author, at this point, knows that there are no rewards in the military, no payment for training nothing but pride, and is functioning on nothing but making himself content with his achievements, he’s focusing on the human, not the economic aspect. In the other Wes’s case, his motivation did shift a bit after his friend Levy had told him about the Job Corps. He was a bit speculate because he’d heard about it before, going to the Job Corps was intrinsic on his part, he wanted to get out of the dealing game though he had high motivation while in the Job Corps, he wanted more from it.

After the events of the book, Wes’ motivations seemed to have gotten greater from this. The author Wes stuck with a high intrinsic motivation because of the military school, he stuck with it, graduated, and then he became a paratrooper for the army. In the end, after all his work and achievements, Wes got what was expected from someone with such intrinsic motivation. “As for me, after receiving the Rhodes scholarship, I spent two and a half years completing my master’s in international relations at Oxford. It was revelatory, exciting, intense, and surreal as Mayor Schmoke promised” (177). Wes’ motivation continued even after graduating. He now is working his way towards a heuristic job in which his intrinsic motivation will keep, he followed by ‘if I continue pursuing a future then I will end up doing what I’m most happy doing”(65-66). The other Wes Moore ultimately came to his downfall after he was found guilty for robbing a jewelry store and killing someone. Getting back into the game made his extrinsic motivation for money to fester more until he stooped to killing someone. Yet again, the other Wes is seen pulling the “carrot and stick tactic” (63-64).

It was not clear how long he had been waiting there, but it was clear he was not happy (Moore 103). At this point Wes has gotten himself into a deep consequence for something he did for intrinsic satisfaction, he went for the carrot and just like the author, got the stick. After getting caught with this new girl, her cousin Ray who was waiting for her outside starts beating on Wes. Wes then reacts with another intrinsic action. “He reached up to the top shelf and pulled out the shoe box that held his 9mm Beretta and a few full clips. Wes opened the box, grabbed the gun and clips, and threw the empty box on the floor….Wes could only see red…. As Ray’s house came into view for all three young men, Ray decided to make a run for it, ducking behind a row of parked cars Wes and his friend traded shots and finally heard Ray scream and fell behind a black Toyota fifty feet from his house”(Moore 105). Here Wes had committed attempted murder, he was then arrested, but what motivated him to do this? Once again, one will come to see that the other Wes Moore runs on the “Carrot and stick tactic” very often (Pink 63-64). He was seeing red in the moment because he thought that what he was doing with Ray’s cousin was alright and in being punished for it, he wanted to defend his intrinsic satisfaction by committing something to try and get rid of the external punishment, and by doing so once again gets the stick by being arrested.

Throughout the whole book, both Wes Moores’ have different kinds of motivation. Still, one can think it’s safe to say that the author stuck with high intrinsic motivation, especially when he started military school. Meanwhile, the other Wes Moore was motivated by money and other extrinsic rewards. Ultimately the author ended up highly successful and grew up with much more pure morals than the other Wes Moore. In the end, what drives you may end up shaping the way your future will be.

Intrinsic and Extrinsic Motivation in "The Other Wes Moore" by Wes Moore. (2020, Sep 03). Retrieved from https://studymoose.com/intrinsic-and-extrinsic-motivation-in-the-other-wes-moore-by-wes-moore-essay 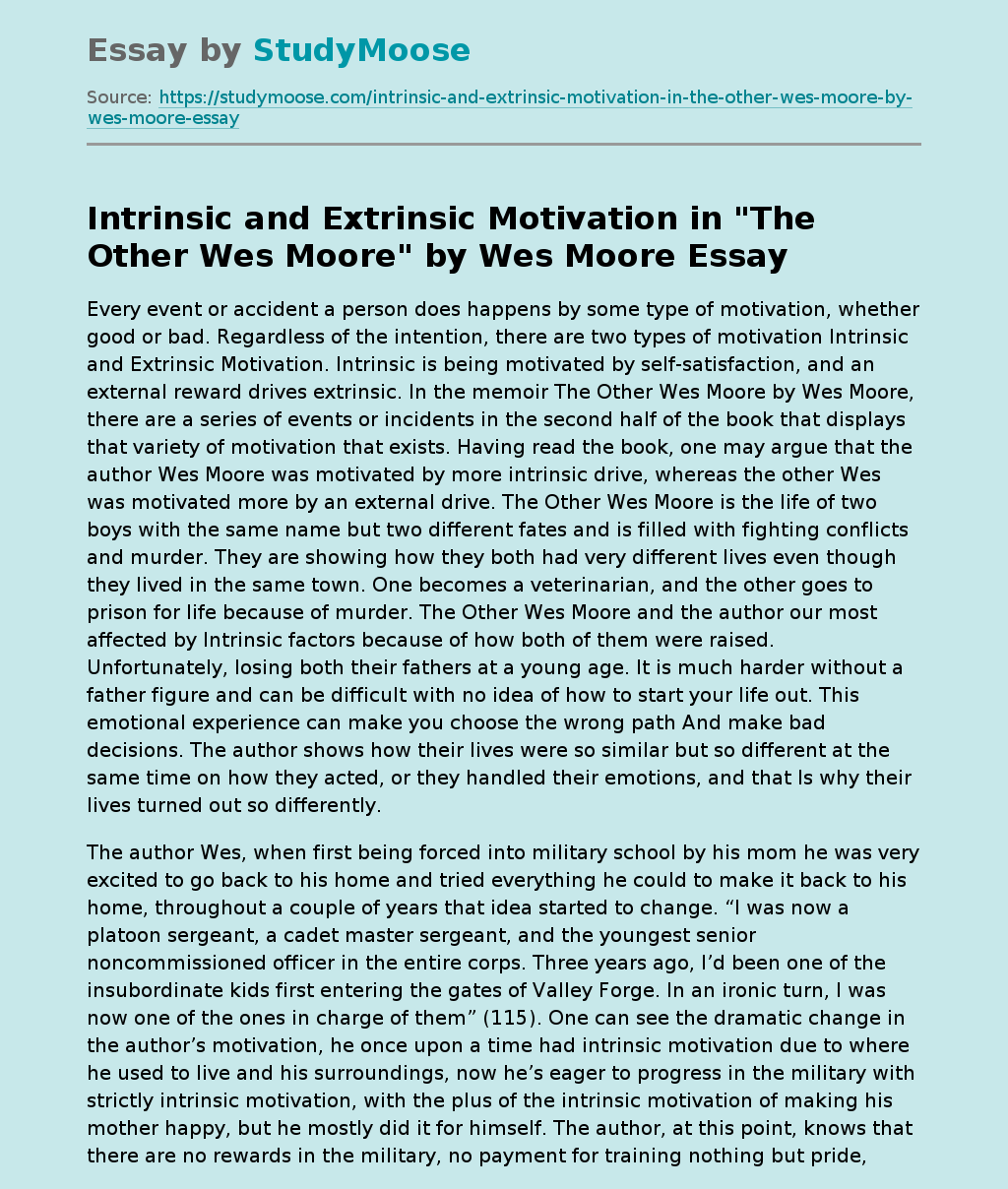