The Other Wes Moore

Many people, in their lives have many monstrous people or moments that shape them to the person they are currently. This molding of personality, however, can have a positive or negative effect on a person. It can permanently form a person’s personality for the rest of their lives. Even though Wes Moore is enrolled in a very sophisticated school, that being Riverdale, the school could not help Wes Moore in the way that Valley Forge can. The problem with Riverdale does not entirely lie in the school system, it lies in the surroundings around the school system.

Don't use plagiarized sources. Get your custom essay on
“ The Other Wes Moore ”
Get custom paper
NEW! smart matching with writer

The drug invested streets and all of the violence makes it extremely hard for Riverdale schools to be a suitable place to get an education. Temptation surrounds the school system and it cannot escape from it. Not having a whole lot of disciplinary actions for unsuitable behavior also causes the school system to crumble away from the best, “The problem was that I wasn’t even showing up half the time,” (Moore 76).

Proficient in: The Other Wes Moore

The author Wes Moore does not have the discipline for not going to his designated classes.

Even though Wes Moore’s start of school is a little rocky, he gets a wakeup call when he arrives at Valley Forge Military Academy. This military school does not play around with Wes in the slightest. At first, Wes thinks he can do whatever he wants and does not have to listen to anyone or anything, not even First Sergeant Anderson. The Sergeant wakes everyone up and forces them into the hallway.

Wes Moore, however, does not believe that he has to get out of bed for anybody. The Sergeant keeps drilling Wes to get out of bed by saying, “Get your Goat-smelling ass out of the rack!” (Moore 86). Wes, however, stands his ground and does not move an inch. The Sergeant then leaves to make Wes think he has won this battle between the two of them. Sadly, Wes Moore is mistaken. Suddenly eight students at the military school pick up Wes’ bed and flings him onto the hard ground.

The Valley Forge Military Academy taught Wes Moore what Riverdale never could, discipline. The other Wes Moore has many educational experiences as well, just not over the same topics. Yes, the author and the other Wes Moore both learn how to let no one trample over them, they do it in about completely opposite ways. The author does it by going to military school to get some discipline for himself and to stand up for what he believes in. The Other Wes Moore does it by violence and intimidation. His thought process is if you scare away your enemies, you don’t have to worry about them. The turning point of both the characters is different from each other. The author turns around his viewpoints in military school and learns discipline. The Other Wes Moore, however, is when he and his brother Tony are on the run from the cops for killing the police officer.

The author chooses to turn his life around while the Other Wes Moore decides to keep heading down hill. The Other Wes Moore could have easily been just as successful as the author. If the Other Wes Moore had a little bit of discipline like the author does in his life time, he would have had a better chance at having a different life, like one that does not have his behind bars for as long as he lives. Also, if the cops would have caught him sooner in his drug gangs, before he was really deep in them and did not have the guilt of killing someone, he could have had a less of a punishment and turned his life around when he got out of prison. The gang helps Wes kill Ray and if he never got involved in the first place he would not have been capable of killing him. This book makes me think about how events in a lifetime shape the kind of person you will become later in life. Everything connects and shapes a person. That is why people should take the positive influences in life to heart and leave out the negative ones so the best life awaits a person in their future.

The Other Wes Moore. (2016, Apr 23). Retrieved from https://studymoose.com/the-other-wes-moore-essay 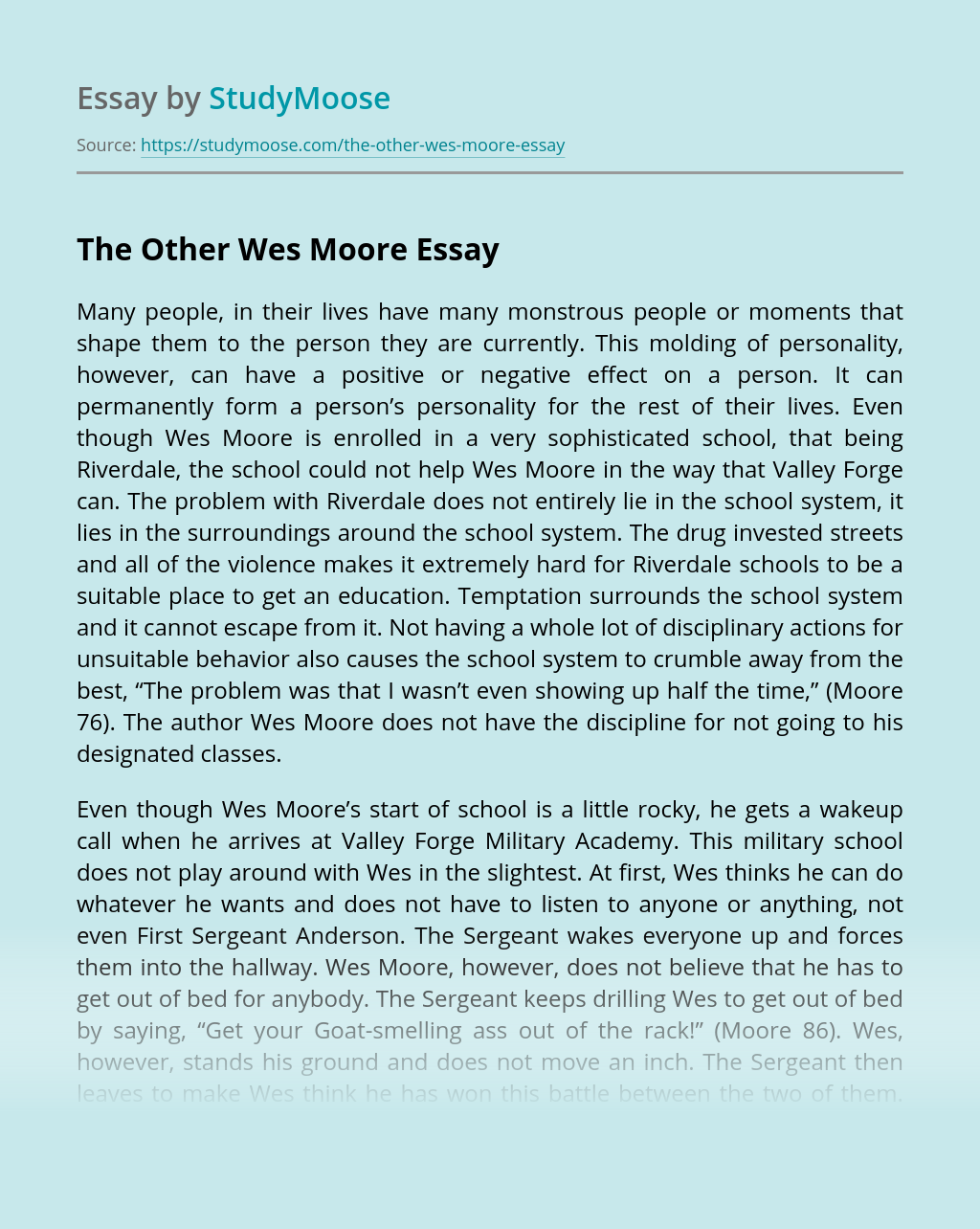