"The Other Wes Moore: One Name, Two Fates" by Wes Moore

The Other Wes Moore is a book about two children with similar lifestyles when they were growing up, and the same names, but ending up in different places in their lives. The story is about the Other Wes Moore, who got charged with first-degree murder and sentenced to life in prison. Wes Moore, them, faces poverty and has a dream and goal of receiving a proper education. Wes Moore grew up in very poor conditions, where he and his small family barely made ends.

Don't use plagiarized sources. Get your custom essay on
“ “The Other Wes Moore: One Name, Two Fates” by Wes Moore ”
Get custom paper
NEW! smart matching with writer

But is it true that two men with alike personality traits and backgrounds can grow up to be different? In “The Other Wes Moore” the story shows how the Author Wes Moore and the Other Wes Moore are both similar, but also exceptionally different when it comes to their lives in regard to family, fate, and choices. For a bit of insight here’s a quote to give you a general idea of what I mean. “Your father wasn’t there because he couldn’t be, my father wasn’t there because he chose not to be.

Although Wes and the other Wes Moore both grew up in the same city around the same time, both were set in diverse environments, which put them through different life situations. The main difference between their characteristics and lives is the foundation of their families, is their mothers. She Wes’s mother was a strong, independent, educated woman that served her family relentlessly. Later, she realized she was losing her grip and needed the help only her parents could provide, and they did. The similarities with the Other Wes’s mother was that she too was never home. The mistake the Other Wes Moore’s mother had made was leaving Tony as the only “parent” to take care of the Other Wes Moore. A quote to prove this statement is “Wes, now eight years old, was free from any adult supervision till then. His brother, six years older, was the closest thing Wes had to a caretaker during the daylight hours and was fiercely protective of the little brother who idolized him. But lately even Tony hadn’t been around much (Moore 2010).” The Other Wes Moore grew up with no parent/guardian to look after or protect Tony’s innocence being of the youth in such a negative environment.

Although he attempted to turn it around on his own, later, the pressures of finances and children took a hefty toll, which pushed him back into the reliable business of dealing drugs. There are many aspects of society that help shape who we become; such as, race, ethnicity, and status. Although, in the end, it is ultimately the choices we make that define us. As individuals, we make certain choices, and as a society, we label those individuals by their choices. One boy decided his achieved status would be of respect, while the other conceded to the fact that he could not do any better, with his life, than dealing. Someone once said “We are a product of our environment…” and to a certain extent, this is completely agreeable. However, it can also be said that our environment is a product of society.

When it comes the two Wes Moore’s lives in regards to family, they are both set in very difficult situations. The factors that surround us when we are young create the people we become in the future. Usually, the people and areas that surround us influence the people we become in the future. If we grow up in an area with lots of poverty crime and with parents that rarely give care what we are doing with our lives. We are expected to probably lead a life of crime and violence. Unlike a person who is born in a well-adjusted place with parents who concerned for their future are expected to lead better lives.

“The choices we make about the lives we live determine the kinds of legacies we leave.” What this quote is saying, is that anything we decide to do, determines what you’re future will be like and what type of legacy will left behind. Tragedies also have to do with how the Wes Moore’s lives and contribute to their legacies individually. The tragedy that had the most impact was the other Wes Moore growing up with a very negative and violent environment. Surrounding him were nothing but negative influences. Wes was given another chance when looking at the small sentence that he got for shooting Ray. But he was naive in his thinking and “couldn’t let the sale go” which made him break into his temptation of being in the drug game. When doing this he chose to throw away his second chance at redemption and a normal life. His sense of belonging is nonexistent because he did not have any sense of belonging growing up.

While on the other hand, The other Wes Moore is very in depth into finding his own sense of identity in military school where he has grown as an individual. Was it luck/fate that led to Wes’s change of heart while being at school or was he deliberately working on shifting his prefacing opinion? The way that he made a choice to accept his mother’s order to go to military school was one of the first ways that he impacted himself to be better. Being aware of his actions up to this point and realizing that life is made up of choices and luck was something that he probably thought about while waking up the next day after his last failed attempt to leave. “The chilling truth is that his story could have been mine. The tragedy is that my story could have been his.” This is Wes Moore explaining how the Other Wes Moore’s life could have also been his relating to the life he lived and the legacy he left.

In conclusion, both Wes Moore’s had critical moments and different standpoints throughout the entirety of their lives. At the end of the day, these men were similar and different in many ways. You come across several moments where things truly could have gone either way. They both could have ended up in each other’s shoes. Different things across their paths led them to different places, but their mothers and their own choices for themselves were a huge factor in what happened to them. However, their circumstances are only the half their battles. Though they both had individual accountabilities it was the choices that they individually made that ultimately determined their fates. “Wes and I stared at each other for a moment, surrounded by the evidence that some kids were forced to become adults prematurely.”

"The Other Wes Moore: One Name, Two Fates" by Wes Moore. (2020, Sep 03). Retrieved from https://studymoose.com/the-other-wes-moore-one-name-two-fates-by-wes-moore-essay 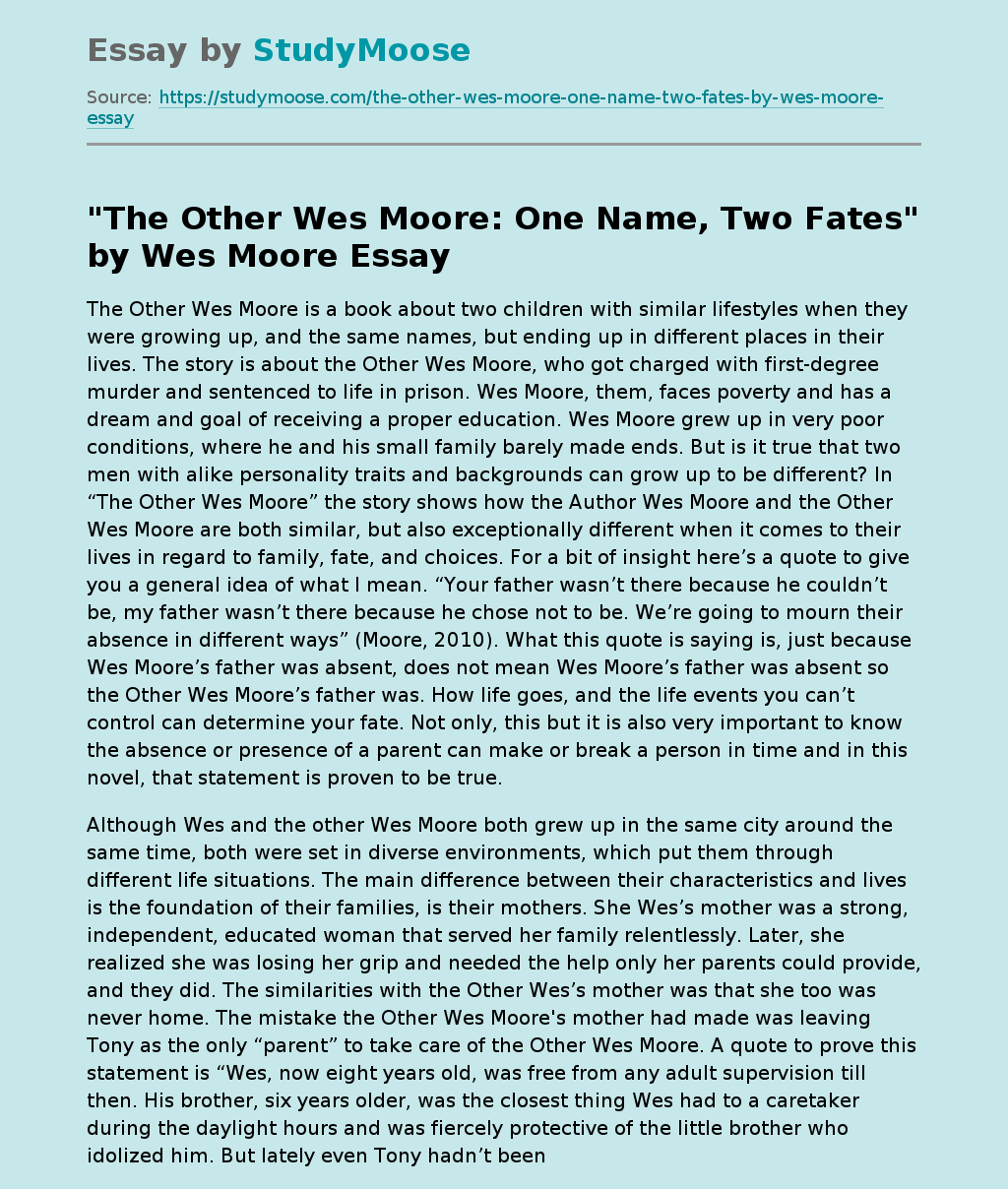