Forgiveness is the Sweetest Revenge

Forgiveness is releasing the energy that was once used by concealing resentments, and tending unresolved issues by putting it to a more beneficial use. No one can earn forgiveness; it is something that is given freely, it is a choice. I believe the word “freedom” is the perfect synonym for forgiveness. There is a lack of restrictions, there is independence, and there is liberty in forgiveness.

I titled this paper Forgiveness is the Sweetest Revenge because revenge is the settling of scores, it is a big comeback; one should seek the revenge over negative emotions within thy self by retaliating, not accepting those negative emotions to be a burden, and granting freedom from mental and emotional bondage.

I have learned that in almost every controversial situation there is always more than one party to blame. When someone is blaming everyone else but themselves they are crippling themselves for change and maturity. I believe this applies to many situations with the exception of physical abuse.

According to our class discussion, there are two emotions that work against us and those are intensity and duration; these are the two that affect our health the most. Many people who do not forgive or do not know how to forgive have rage and anger problems on many different levels. These problems proceed to escalate into health problems. Long term repression is related to cancers. When people are stressed, bitter, angry or depressed, toxic and unhealthy substances are created in our bodies; this is a substantial reason as to why it is so important to know how to genuinely forgive.

Forgiveness is not telling others that you have been hurt. It is also not telling the “offender” that you forgive them. Forgiveness is not approval for what they did. There is a fine line between understanding and excusing. They are two different things. You can understand something, but not excuse it. Excusing would result in compromising your morals and values for the “offenders’” actions. It is not getting justice or revenge. Forgiveness is not based on the apology or restoration to the offender. It is not reconciliation; forgiveness takes one and reconciliation takes two and this also has a lot to do with trust issues.

There are many academic representations of what forgiveness is, however some academic resources such as thesaurus. com defines forgiveness as being something that contradicts it’s valid meaning. According to thesaurus. com the definition for the word “forgive” means to stop blame and to grant pardon. Some of the synonyms provided for the word “forgive” are, to accept apology, excuse, acquit, dismiss from mind, kiss and make up, forget, to purge, to let go, to release, to let bygones be bygones, and to wipe slate clean.

Contrary to what this website describes as forgiveness, its’ definition is none of these things, in fact it is the absolute opposite according to the things that forgiveness “is not” as stated in the last paragraph. Forgiveness is justice, it is mercy, and it is grace. Justice is mainly concerned with what is right or wrong and punishment or reward idea. Mercy is more of a feeling or act of pity and compassion. Grace is an act of favor and honor. Forgiveness is all of these things. An example of all three combined would be an act of crime such as shoplifting.

If someone shoplifts and gets caught the person who is the victim can seek justice, and they can have mercy on the offender by having pity on them. They can also grant them favor or honor, not by excusing the crime, but by simply wishing them the best in life, praying for them, or even showing different forms of acts of kindness. Just because someone seeks justice does not mean they do not forgive the offender, as the saying goes “Peace is not the absence of war, but the presence of justice (Harrison Ford)”.

What I found to be most interesting in our class discussions were the talks about how diverse religions interpret the meaning of forgiveness. According to Answers. com, Judaist believes that if a person causes harm, but then sincerely and honestly apologizes to the wronged individual and tries to rectify the wrong, the wronged individual is religiously required to grant forgiveness. After a certain point, three sincere apologies, an attempt at restitution, a clear indication that the person has changed, it becomes the obligation of the wronged party to forgive.

Christianity teaches how and why one should forgive very differently from Judaism. In the Kings James version of book of Matthew 6:14-15, it reads “14 for if you forgive others their trespasses, your heavenly Father in will also forgive you, 15 but if you do not forgive others their trespasses, neither will your Father forgive your trespasses”. In Matthew 18:20-22 it reads, “21Then came Peter to him, and said, Lord, how oft shall my brother sin against me, and I forgive him? Till seven times? 22Jesus saith unto him, I say not unto thee, until seven times: but, until seventy times seven”.

Christianity has no limits to God’s forgiveness. There are many ways of completing the forgiveness process. Writing, reading, drawing, using musical or artistic talents and gifts are all some sort of therapy. One very common way of forgiving is writing a letter and then marking on the letter in a bright bold color in all caps “FORGIVEN”. After making the letter, one can either burn the letter or rip the letter into small pieces of paper. It is fundamental to know if one has truly forgiven or not. This is a very important step within the forgiving process.

According to our class discussion, a person knows when he or she has forgiven when anger dissipates, reconciliation sometimes occurs, behavioral responses are calmer and steadier, motivation to the “offender” changes, when the situation is not dominating your thoughts as it used to be. A persons’ energy is less negative and more positive, and when our emotions are a lot less intense and we let go of them faster when they have forgiven and there is a change in physical appearance, mentality, and spirituality and it usually happens without them realizing it.

My definition of forgiveness is “A selfless choice that grants freedom from being mentally confined and judgmental resulting in granting oneself liberty, mercy, and grace. ” We hold onto anger not because we have to, but because it gives us something; the feeling of our own righteousness, a reason not to deal with someone or a clear reason to draw a line between good and bad. There is a short story that I would like to tell that represents my definition. My mother told me this story. There once was a little boy who had a bad temper and was filled with anger because the children at his school teased him and mocked him.

His Father gave him a bag of nails and told him that every time he lost his temper or every time he feels the need to seek revenge on the ones who hurt him, he must hammer a nail into the back of the fence. The first day the boy had driven 37 nails into the fence. Over the next few weeks, as he learned to control his anger and as his stress began to diminish, the number of nails hammered daily gradually dwindled down. He discovered it was easier to hold his temper and to forgive than to drive those nails into the fence. Finally the day came when the boy didn’t lose his temper at all and his attitude became more positive.

He told his father about it and the father suggested that the boy now pull out one nail for each day that he was able to hold his temper. The days passed and the young boy was finally able to tell his father that all the nails were gone. The father took his son by the hand and led him to the fence. He said, ‘You have done well, my son, but look at the holes in the fence. The fence will never be the same. When you hold in anger, depression, and sadness, they leave a scar just like this one. You are the fence, the nails are the ones who hurt you and the hammer are the actions or words that was said to make the scares.

Forgiveness is the Sweetest Revenge. (2017, Jan 05). Retrieved from http://studymoose.com/forgiveness-is-the-sweetest-revenge-essay 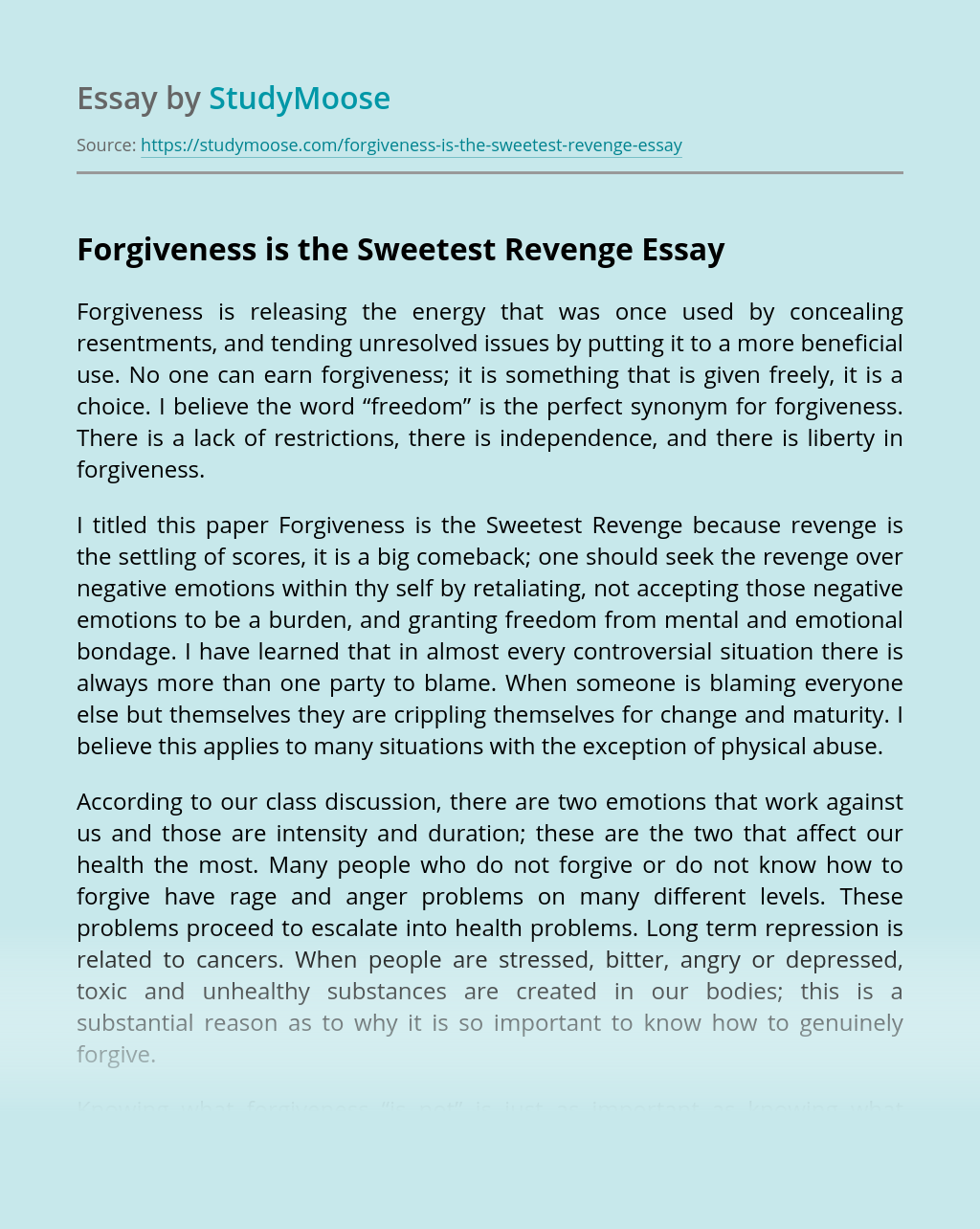 Don’t waste time
Get a verified writer to help you with Forgiveness is the Sweetest Revenge
Hire verified writer
$35.80 for a 2-page paper
Stay Safe, Stay Original