With the use of a circuit simulation, the group verified the values obtain through computation.

The experiment is all about Delta-Wye and Wye-Delta Transformation. Before getting into the experiment, one should take note about the theories behind this experiment. Electric circuit may contain networks that are neither in series nor in parallel, making it difficult to analyse them using the previous techniques.

Figure 1: Delta Network, Wye Network (Left to Right)
A transformation formula is based on the concept that if the two connections are equivalent then the resistances seen across the pair of terminals are
also equivalent. Due to this, analysis of complex circuits wherein such three-terminal networks exists is simplified using this method. Resistive networks between two terminals can theoretically be simplified to a single equivalent resistor. Series and parallel transforms are basic tools for doing so, but for complex networks, the basic tools like Series-Parallel circuits, Kirchhoff’s Laws do not suffice. Methodology

With the applications of Wye-Delta Transformation methods, the group simulated a circuit with a wye network using Tina Pro™. The following values obtained from the simulation were basis for the computation of the Delta Transformed Circuit. Using the Formulas given in Equation 1, the group was able to transform the Wye Network to Delta.

Another circuit was simulated using Tina Pro™ but this time, a Delta Network was simulated. The results of this simulation became the basis of computations for transforming a delta Network to Wye for a more simplified circuit. Like the Wye-Delta Transformation, an equation was also used to determine the equivalent wye Network for the given delta network (see Equation 2).

In experiment 4, where Delta – Wye and Wye – Delta Transformation. We did a simulation consisting of a delta and wye connection and tested the theory that converting the circuit into wye or delta or inversely to the other the resistances will be different and will have different values but the circuit’s output since the beginning will have the same voltage and current in specific areas of the circuit to determine the current. Also, resistances are equivalent in the circuit in transformation. Mainly, the only process that were done on this experiment is by simulation (Tina Pro) and by computation. Table 1: Measured and Calculated Values

The following data were the results of computation using the Equations 1 and Equation 2. It appeared that similar values were obtained for both the two transformations which even simplified the analysis for the circuit. Converting the circuits allowed us to utilize the simple theories discussed in the previous experiments like the Series-Parallel Connections, Voltage and Current Divider theorems.

Afterwards, a circuit simulation was done using Tina Pro and compared with the answers that we have obtained. Closely similar values appeared in the simulation.

The delta-wye and wye-delta transformation is a useful technique in circuit analysis in transforming a circuit to reduce it to a simpler circuit but of course the resistances will be constant before transformation. The circuit of delta wye is equivalent to each other but the arrangement of the resistances in the circuit will be of different values but theoretically the current and voltage across different areas in the circuit must be relatively close to each other. The circuit of delta forms a triangle and we must create a circuit that looks like a letter Y with the formulas while inversely if the circuit given is a Y shaped circuit that cannot be reduced we must transform it into a triangle shaped circuit. Also, in this experiment we learned that doubts must be removed and if there is anything to question about we should ask our professor for all our clarifications asking questions is also a way of learning from the best. 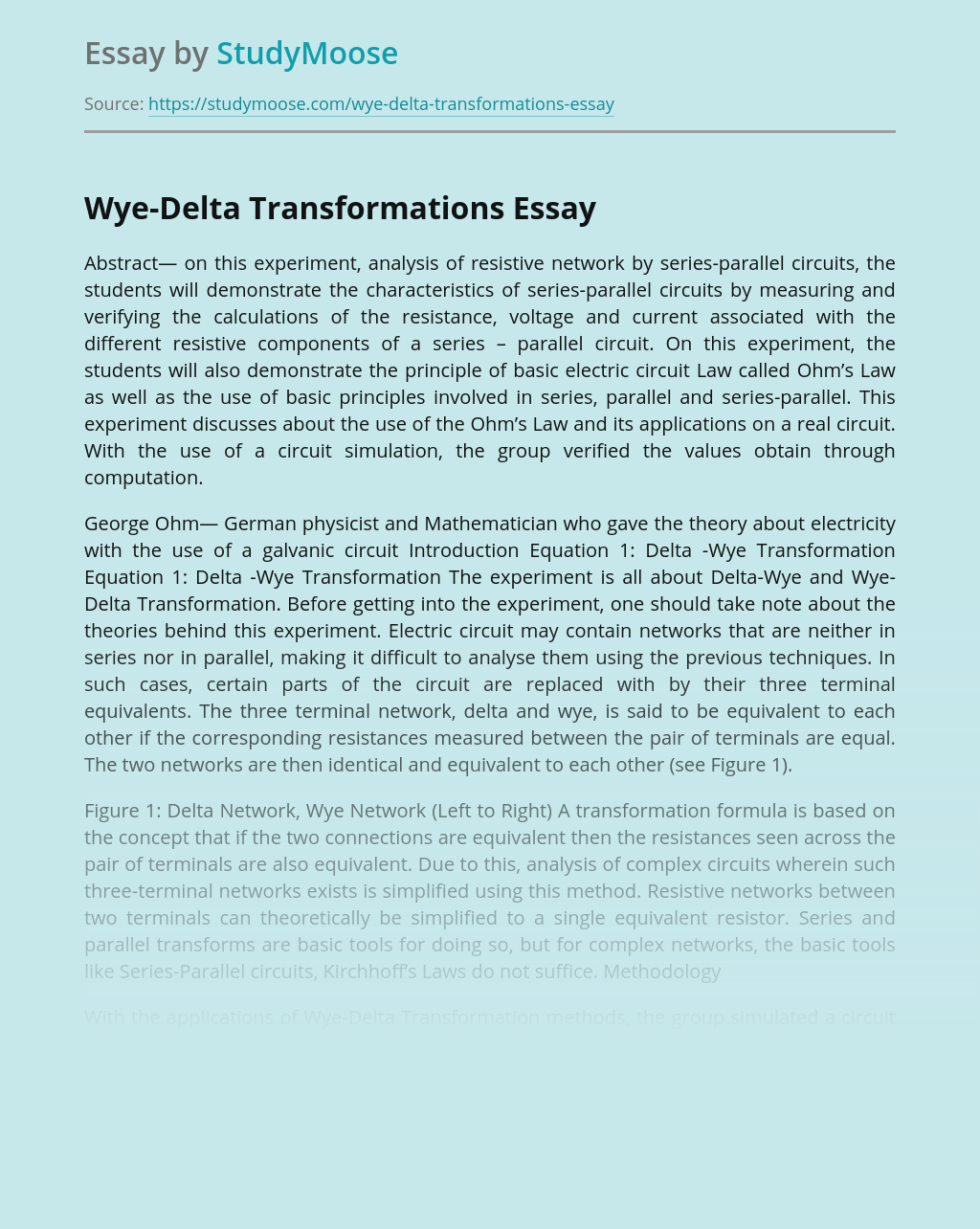