A Christmas to Remember

When I was younger, there were two things that I looked forward to each year: Christmas, and the thoughts of getting the most popular toy topped the list; spending time with my grandfather was a close second. When I was six, in December of 1990, I found out that I was going to spend Christmas at my grandparents’ house. It was everything I could possibly hope for. Little did I know at the time, it was going to be a Christmas I would never forget, and that would change me forever.

Don't use plagiarized sources. Get your custom essay on
“ A Christmas to Remember ”
Get custom paper
NEW! smart matching with writer

Christmas, for me, meant the pretty presents, wrapped in shiny paper with huge bows on them, which sat under the tree. It meant the Christmas tree, so beautifully decorated. It meant the splendid Christmas meal made of turkey, ham, vegetables and my mom’s apple pie. But most of all, the holidays meant the shiny new presents that I would be receiving I would sit around for weeks, trying to come up with a Christmas list good enough to rival what I knew my friends would be getting as well.

That year I had to have a Gameboy, and the Super Mario World game that went along with it. I realize, now, that I was very spoiled, but I didn’t care. The holidays were a time about me, and only me. And this Christmas was going to be the best one of all, spent with my grandpa.

A lot of young kids are intimidated by their grandparents, whether it be the typical “old person smell,” the inability to relate to young people, or just the fact that they are boring.

Not me though, I had the coolest grandfather in the world. He used to dress up like in different costumes just because he felt like it. The two of us always went out hunting or fishing or sometimes just to sit out on their pond and talk. Some girls are “Daddy’s girls,” but I was a “Granddaddy’s girl.” I had never spent Christmas with my grandparents before and could only imagine just how wonderful it could be there. Early in December, my mom told me that we were going to be spending my entire holiday break in Arkansas with my grandparents. In hindsight, I should have known that something was wrong for both my parents to take a month off of work but I wasn’t thinking about that. I wasn’t thinking about anything but my grandpa!

The end of school came and went, and in no time we were in the car driving from Dallas, Texas to Magnolia, Arkansas. I watched out the window as we left the flat lands of Texas and entered the small hills of Arkansas. There was even snow on the ground! Upon arriving to the house, I could sense something was different. The atmosphere of the house wasn’t quite as joyful and boisterous as usual. My grandfather wasn’t his usual self; he was trying to be the energetic man we all knew, but it just wasn’t the same. Even when my aunts, uncles and cousins got to town, things were still very hushed. My cousins and I all knew something was wrong, we just couldn’t quite figure out what it was. I constantly heard the hushed whispers of my mom with my grandma and my two uncles.

Within a couple days everything came to light. In the middle of the night a few weeks before Christmas, the lights were turned on and my grandfather was taken to the hospital. Even in my groggy state, I knew that things were going to change a lot in the next few days. At the hospital I was informed that my grandfather was not expected to live much longer. He had been diagnosed with colon cancer before I was born and had been in remission, but it was back and it was spreading uncontrollably. The next few days were hard on all of us. We were in and out of the hospital. I forgot that it was even Christmas time. I think my whole family did. My grandpa was constantly in surgery to try to remove the infected cancerous parts. All of this taking a toll on his body, he was put into ICU. Christmas was now only a couple days away, and being in ICU meant that there was no hope to spend the holiday with him.

Christmas day was the most disheartening experience of it all. On Christmas morning, we didn’t even want to open presents. It didn’t seem right to have something so joyous while he was hanging on for life in a cold stark hospital bed, but we did anyways. I got the Gameboy that I had wanted so badly, only I could have cared less about getting the toy that I had been so excited about only weeks earlier. Rather than cooking at home we went to the hospital and ate in the cafeteria. Reflecting back, I think it was hardest on my grandmother. They had spent nearly 50 Christmases together and for the first time, she was getting a glimpse of what it would be like to spend the rest without him.

The next morning, my grandfather passed away. The complications of his cancer, along with his age, had been too much on him and his body just gave out. I am thankful that I got to spend the last Christmas with the man that I loved so much. There isn’t a Christmas that goes by that I don’t think about my grandfather, and all of the experiences I have shared with him. Christmas in Arkansas has become a tradition in our family. That year Christmas stopped being about pretty bows and wrapping paper, and started being about memory. I learned that memory is a way of holding on to the things you love, and the things you wish to never lose. In a world changes way too fast, the best we can do is wish each other Merry Christmas and learn that life does, in fact, move on.

A Christmas to Remember. (2016, Jul 21). Retrieved from https://studymoose.com/a-christmas-to-remember-essay 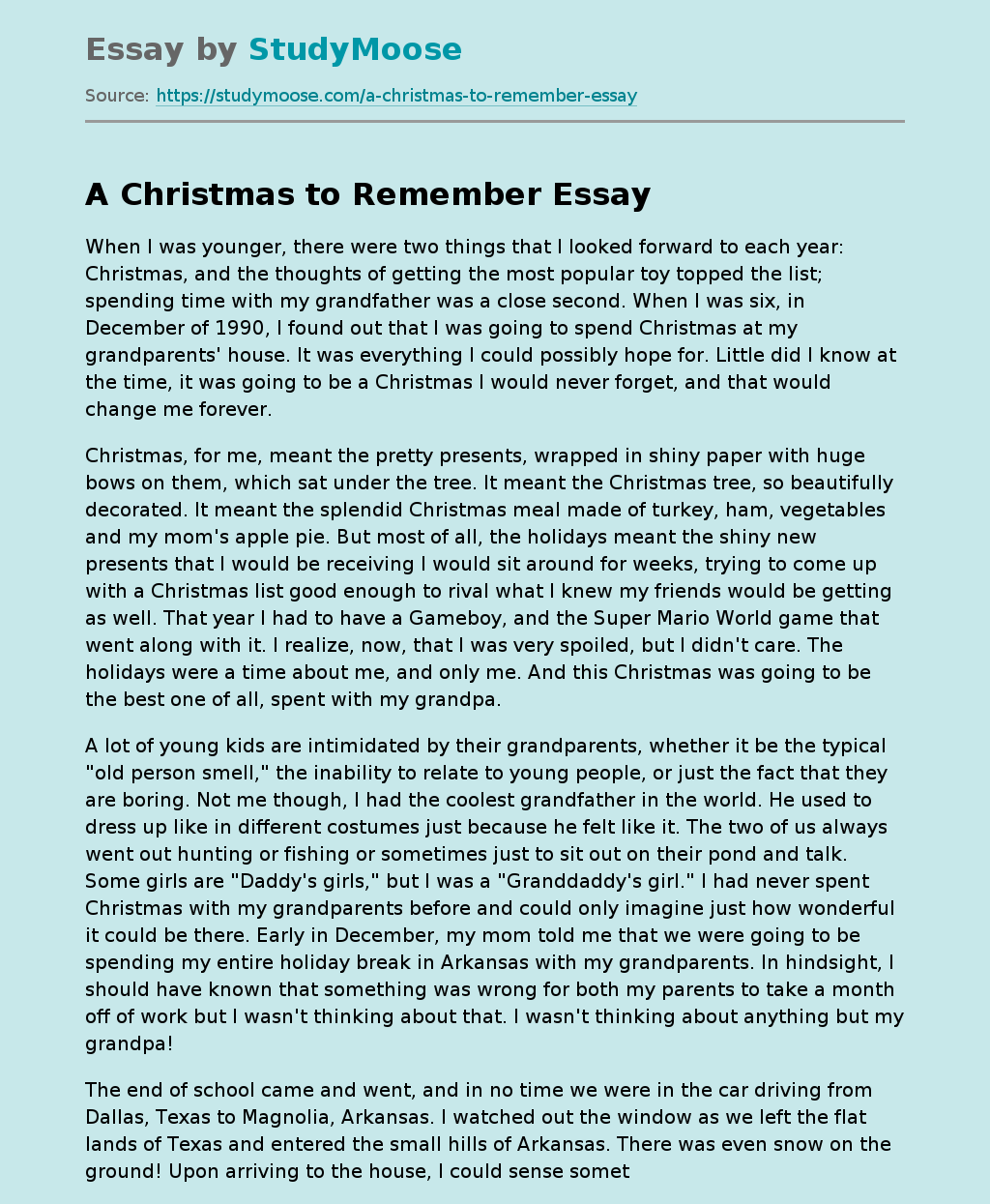