Fear in The Fall of The House of Usher

Fear is a feeling we have all dealt with at one time or another. It is something that we first experience as children, and are conditioned to respond to in many different ways. Some may challenge themselves to overcome their fears and others constantly live in a state of fear. “The Fall of The House of Usher” by Edgar Alan Poe holds several examples of how fear can transform a person’s mental and or physical state, most notably the character Rodrick Usher.

Don't use plagiarized sources. Get your custom essay on
“ Fear in The Fall of The House of Usher ”
Get custom paper
NEW! smart matching with writer

The Fall of the House of Usher reflects the fear in society today, as for most people fear is a horrible and sickening feeling, which can sometimes be debilitating, and in Rodrick Usher’s case, fear can completely transform someone’s mentality.

Alienation is a feeling of not belonging in society, caused by the general public’s or one’s own view of the world that causes a clash between what is considered good or bad dissimilar or customary.

In “The Fall of The House of Usher”, Roderick’s state of mind get’s a little more fearsome throughout the story. The narrator describes in exquisite detail the gloomy appearance of Roderick’s castle, and of Roderick himself. Roderick is described as being very much changed since the narrator had last seen him. He is now very pale, almost ghostlike. “I dread the events of the future, not in themselves, but in their results I shudder at the thought of any, even the most trivial, incident, which may operate upon this intolerable agitation of soul” (Poe 18).

In this quote Roderick talks about how he is worried about the future for him and Madeline, and that if his sister ever died he would be afraid to have to be all alone. Roderick state of mind reflects the fears of society and the state of alienation some people are living in this day. Roderick was very fixated at the thought of Madeline dying and leaving him alone in the house that Roderick stays in all day. When Roderick informs the narrator that Madeline has indeed finally succumbed to death, they have a funeral service for her, and put her in the tomb. After this the narrarator fears that The story ends by Madeline waking up, coming after Roderick, and ultimately killing him.

Throughout the centuries, isolation has occurred constantly due to society’s fears of something or someone so dissimilar to what is considered part of the norm. Roderick seems to be distant from society. The narrator talks about how the house in which Roderick lives in affects his mentality. “He was chained by certain superstitious impressions in regard to the dwelling which he tenanted, and whence, for many years, he had never ventured forth was conveyed in terms too shadowy here to be restated– an influence which some peculiarities in the mere form and substance of his family mansion, had, by dint of long sufferance”(Poe 19). This story explores a family so isolated from the rest of the world that they’ve developed their own supernatural barriers to interacting with it. The House of Usher exists in its own reality, governed by its own rules and with no interest in others. Such extreme isolation forces the family members closer and closer to each other, again to a supernatural degree, and inexplicable to any outsider. This story shows how someone, if separated from other people, becomes increasingly disturbed. This is true with most cases. The most feared punishment for a prison sentence is solitary confinement, where the prisoner is not allowed contact with the outside world or any other people besides the warden who delivers the food. It has been documented that prisoners in solitary confinement become crazed and extremely volatile. Fear is something so strong that it can change someone’s complete state of mind, physical appearance and mentality.

Fear in The Fall of The House of Usher. (2019, Dec 18). Retrieved from https://studymoose.com/fear-in-the-fall-of-the-house-of-usher-essay 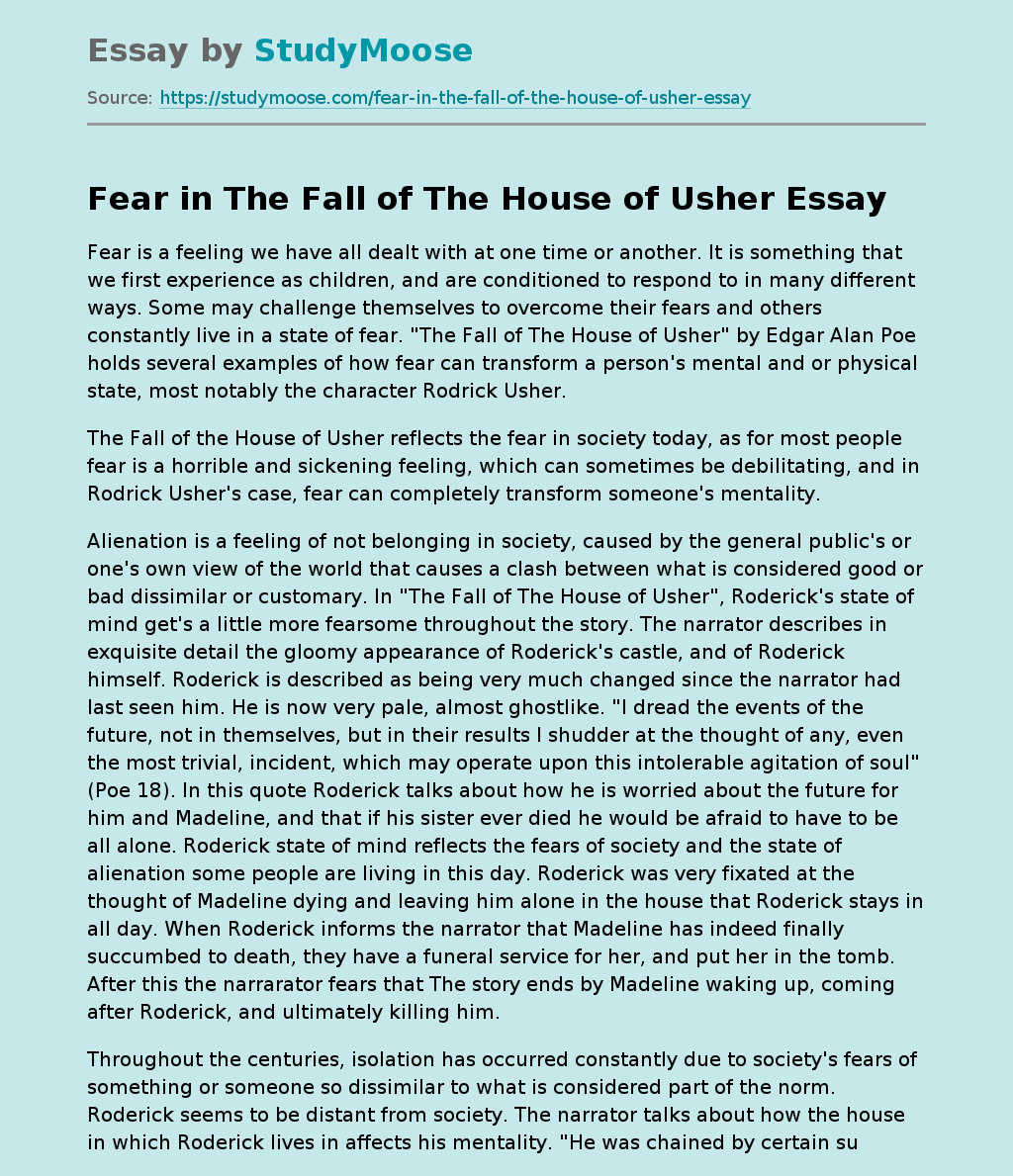