I remember that towards the end of my senior year in high school, my parents suggested that I apply to a four-year college. They also offered to pay for the cost of going to college as long as I would go full-time and would start right after high school. They believed that I would be more prepared to challenge the real world by having a four-year college degree rather than just a high school diploma. Having a higher education made the difference in getting a good job with a decent salary.

Don't use plagiarized sources.
Get Your Custom Essay on Life After High School Just from $13,9/Page

Unfortunately, I did not follow my parents’ advice to go to college right after high school. Instead, I decided to look for a job because I wanted to be independent. After I had been working at different dead-end jobs and making minimum wage, I tried to apply for better jobs that would pay more than ust the minimum wage. These jobs required a higher education such as having a two or four year college degree, which I did not have.

I soon realized that I had to go back to school to obtain a higher education. I hated the fact that I had basically wasted three years.

Now I encourage my younger sister to go to college right out of high school.By doing so, she wouldn’t waste time working in dead-end jobs making minmum wage. Instead she would concentrate on getting a better education which would provide her with a better paying job. I didn’t want my sister to learn the hard way that she could have been better off by going to college ather than working right out of high school. I felt good to see my sister’s interest in applying early to go to college right after she graduates from high school.

Although she is still a junior in high school, I am glad she has learned from my mistake of not taking my parent’s advice when I had the chance. Fortunately, I did go back to school, and now I’m in my last semester of college. I guess it is better late than never. 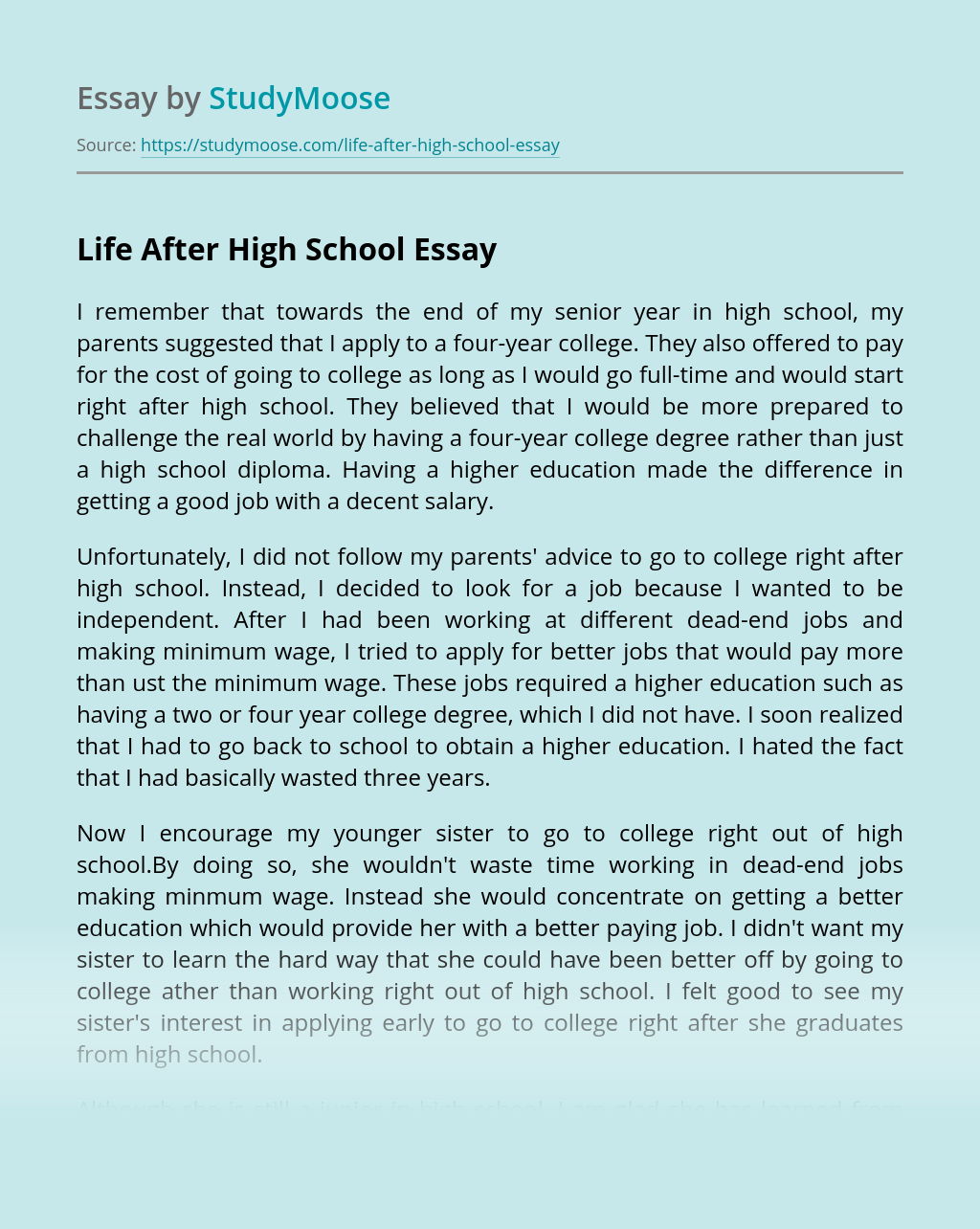 Life As a Fashion Designer

The career in which I am most interested in the textile industry is that of the fashion designer. A fashion designer is the person who comes up with the ideas and designs today, for the clothes that we, the consumers, will be wearing tomorrow. This alone, the power to inspire the world of fashion ,... VIEW ESSAY

View sample
A Day in the Life of Brent Dorsey

Acting and speaking before THINKING, this goes back to a humans’ primitive stage. We are all animals, in the sense that we are mammals. Manifested through our psyche or personality, each animal has a different representation. From personality traits, behavior or even symbolism, animals have the ability to portray these features in humans. In Yann... VIEW ESSAY

View sample
Do People in Public Life Have a Right to Privacy?

People, famous or not, have a right to privacy, which is a basic human right. Although some of them have voluntarily made themselves known to the world, they are still entitled to live a life without others following them all the time, eavesdropping on what they say and being under surveillance. However, in the case... VIEW ESSAY