Differentiate educated man from an uneducated one. The difference between educated and uneducated people is exactly that. It is the level of education that a person has. Education is very important. Actually it is one of the most important thing for our lives in my own point of view. It is clear to us that not everyone can have the opportunity to have the education they need and this lead to divide people into two groups: educated and uneducated people.

Don't use plagiarized sources.
Get Your Custom Essay on Differentiate educated & uneducated person Just from $13,9/Page

Both of them have their advantages and disadvantages for themselves. Let us evaluate them in terms of economic power, social status and mentality. It is true that educated people have a lot more opportunities in business world than uneducated people.

Because they primarily have a certificate verifying their state of being educated and this is what counts most of the time. They have more opportunities to have a good job, they have a better income. Uneducated one have to work in simple temporary jobs or have to do very heavy muscles work in a construction or field.

More earned money over a life time means a higher quality of life, better food and a longer life than someone without a lot of education. The issue of income according to their jobs brings us to another aspect which is the social status of these people. When you have money, you seem to be respectable for other people. One other reason why educated people have a superior status is that they act in life according to their level of knowledge. The truth that if you earned a lot, the status of life is higher, but if you have those blue collar jobs the social status is somehow lower.

The mentality case, we have the impression that educated people are open-minded whereas uneducated people are somewhat closed-minded. This is the reality, the educated people have an advantage of greater knowledge about the world, other people, possibilities and existence because they are educated not only technically or scientifically but also culturally. They have a chance to see the world from the eyes of other people through the education they receive. Yet uneducated people are mostly straight laced because they have what they see and learn from their parents and what they experienced in life and the sometimes its upset most is that they treat their children with the same mentality. However, educated people want their children to go far beyond them. They want them to make better than what they did, because they know that every day and every second of our lives some things change and develop and some things are discovered and invented.

As we see there are some aspects according to which educated and uneducated people can be compared and contrasted. I don’t know if I find myself biased but I guess I am, because I value education so much. I don’t want to put a blame on uneducated people, maybe there are reasons behind these, but I believe that poverty is not a hindrance to be educated. All of these remind us the importance of everything is EDUCATION.

2. Connect: Man and his learnings.

“Give a man a fish, feed him for a day. Teach a man to fish; feed him for a lifetime.” The founder of Taoism, Lao Tzu, spoke these words over 2000 years ago. Education is similar to this principle. For centuries students were “fed” information and taught to memorize facts, in the hope they would retain a portion of what was taught. Today it isn’t enough just to feed information to students. Our world is changing so fast that new information becomes available faster than it can be taught. If a nation wants to keep pace with this ever-changing world, then learning can’t stop at graduation. Students as well as teachers must learn “how to fish” for knowledge by becoming lifelong learners. Teachers can become life-long learners by realizing and acknowledging that life long-learning is a necessity; by learning to keep up with changes through personal and professional development; and by teaching with passion, inspiring young minds to see learning as something wonderful. If a man followed his learnings, the life of each of us is in good direction, education is the key to learn and be aware of everything.. 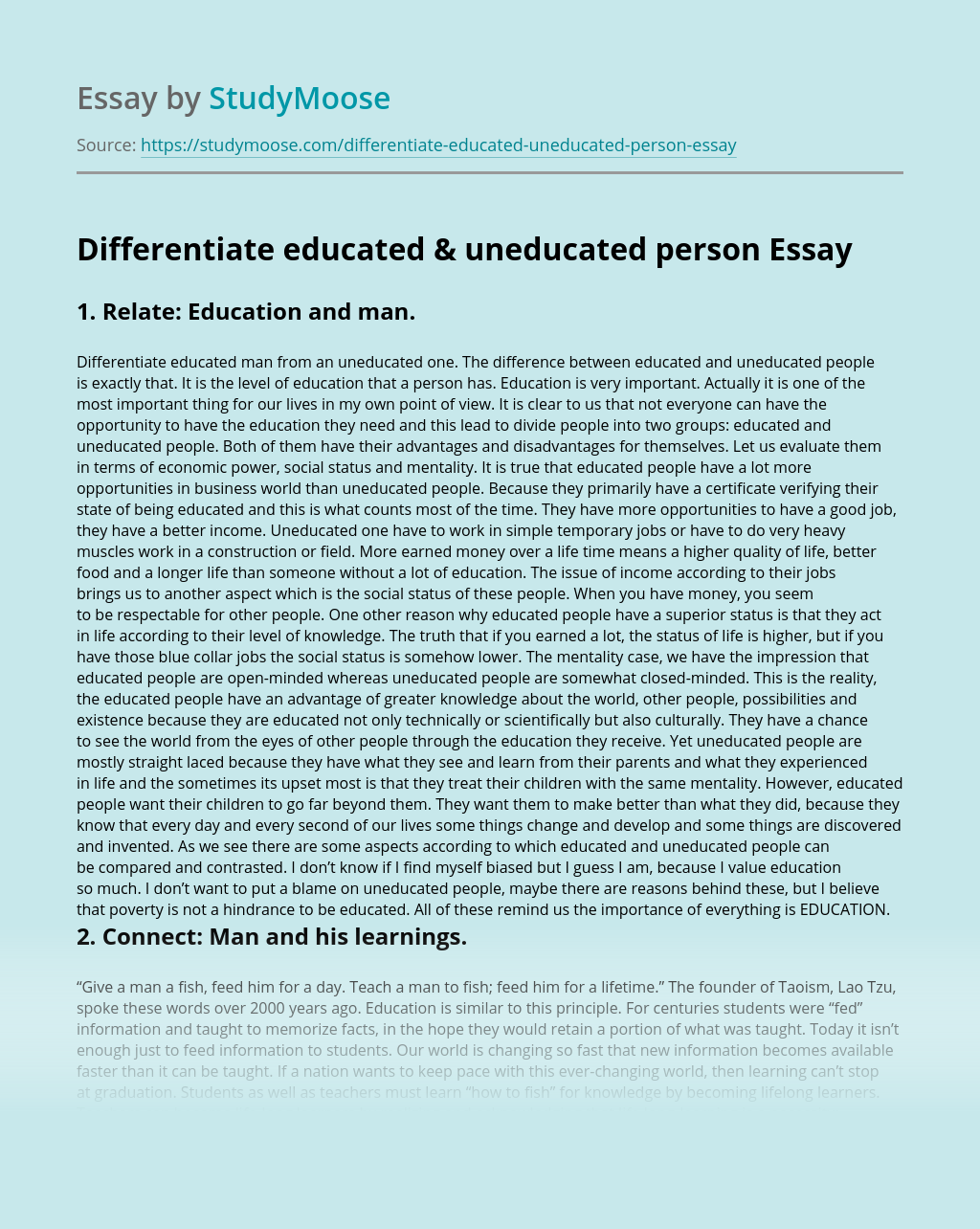 Mersault and His Trial in Albert Camus's "The Stranger"

Is there truly any justice in the novel The Stranger, written by Albert Camus? This is a question that naturally protrudes throughout the novel, as it is not abundantly clear what Meursault, the protagonist, was, in fact, put on trial for. At the beginning of the second part of the narrative, it is understood that... VIEW ESSAY

Hesperocallis undulate or more commonly known as the desert lily is a plant that is found in the Sonoran desert. A few words or images come to mind when one thinks of the desert, words like heat, dirt, cactus, and sand these are just a few that come to mind. This is not all the... VIEW ESSAY

Your total answers that you write must be 1000 words minimum. To be submitted by due date to Blackboard. Type your answers and include your name. Unless you are in an online course, you must be in class on the date we discuss the case for full credit. Make sure your answers are very easy... VIEW ESSAY

Amongst all the different kinds of adventures there are in the world, there’s an adventure for everyone and each adventure will have that moments which would inspire you long after the adventure is over. The importance of adventure sports is being increasingly recognized in India from both the educational and social point of views. More... VIEW ESSAY

In this essay am going to write my personal reflection on what I have learnt in research study skills. This will include some assessment of my personal learning style and strengths and weaknesses, an estimated work plan for my completion of the degree, and the strategy I intend to adopt for future essay writing. Research... VIEW ESSAY