Hume and Kant Opinions of Taste and Beauty

All of the experiences which people get when looking at beautiful paintings, listening to music, reading outstanding poems or novels, have an immediate an emotional character. In order to describe those types of experiences, the term “aesthetic“ is used. Many philosophers have studied questions dealing with aesthetics, and one of the most famous of them can be regarded Hume (“Of the Standard of Taste”) and Kant (Analytic of the Beautiful”).

Both Hume and Kant regard aesthetic judgement as the one which is exemplifying taste.

Don't use plagiarized sources. Get your custom essay on
“ Hume and Kant Opinions of Taste and Beauty ”
Get custom paper
NEW! smart matching with writer

In the 18th century aesthetics taste was considered a special mental faculty, or a special mode of employment of mental faculties, exercised in aesthetic judgment. The category of taste is described very well in the works of Hume and Kant. They give a full characteristic of aesthetic judgement formation, and present their peculiar view on the aesthetics.

The problem of judgments of taste is formulated by Kant in the following way: “How is a judgment possible that, merely from one’s own feeling of pleasure in an object, independently of concepts of it, would judge this pleasure a priori- that is, without having to wait for the concurrence of others- attaching to the representation of the object in every other subject? ” Kant and Hume depict 2 absolutely central features of aesthetic judgement.

The first central feature of aesthetic judgement on which this judgement rests, according to Kant, is on a felt response to an object.

This means that an aesthetic judgement of some specific object cannot be passed secondhand.

On the contrary, it requires a person himself to see the object, and get an idea about it. An aesthetic judgement always requires a person’s acquaintance with an object. For example, if there is a new movie produced, and many people say that it’s a fantastic movie which is worth watching a couple of times, it doesn’t necessarily mean that some specific person will like the movie. There can be many things about the movie which he will not like, even though all of his friends are all in awe of it.

The novel makes an impression on us on all levels, it’s a completed work, and we can get a judgement only of the novel on the whole, not just according to the language analysis. According to Kant, “The judgement of taste … is not a cognitive judgement, and so not logical, but is aesthetic-which means that it is one whose determining ground cannot be other than subjective. Every reference of representations is capable of being objective, even that of sensations. The one exception to this is the feeling of pleasure or displeasure.

This denotes nothing in the object, but is a feeling which the subject has of itself and of the manner in which it is affected by the representation. ” The fact that rules are otiose in determining aesthetic qualities of different objects reflects the fact that the aesthetic judgement of objects is directed towards those particular objects, but not for the sake of creating specific rules and laws of those judgements. Judging according to rules cannot be beneficial for people because in such a case they can completely miss the real impression of the object.

On the contrary, aesthetic subjectivism rejects the opinion that aesthetic qualities are inhering in objects. It argues that for the object to be beautiful in somebody’s view, it has to yield a certain response in the subject. In aesthetic experience a person is affected by the object, and the response the person gets does not consist in the knowledge of the object’s properties. The subjectivity of judgements of taste is what Kant terms their “aesthetic” character. According to Kant, judgements of taste are based on feelings of pleasure.

Such feelings are not able to have cognitive employment. Kantian judgements of taste appear just as cognitive and objective as any other judgements, but they are based on the feeling of pleasure, unlike other judgements. A judgement of taste, on one hand, refers a feeling of pleasure to an object just as a judgement on a sensible quality of an object refers a sensation to it. On the other hand, a judgement of taste is a claim to the effect that any human being who is perceiving the given object will find pleasure in doing so.

However, it’s impossible for this point of view to accommodate the evaluative character of judgements of taste. They are thus reduced to mere psychological generalizations. This creates 2 problems: 1) how is it possible to make a sense of the idea of a judgement in which a feeling is a predicate; 2) due to the conjunction between a representation and feeling, the assumption that the judging precedes the feeling becomes complicated. Kant’s statement cannot be made mutually consistent by distinguishing between different acts of judging in a judgement of taste because there can be only one such act.

What precedes the feeling isn’t the full act of judging itself, but the requirement according to which a person has to make something universally communicable of his representation. Aesthetic subjectivism bears many powerful advantages. As Hume observes, the taste and opinions of different cultures and individuals vary enormously. In one culture, some actions are considered deeds, while in other cultures the opinion can be completely opposite. For example, centuries ago it was considered very important among Indians to get scalps of those people whom they killed, and all the women enjoyed seeing bloody scalps on the belts of their husbands.

The women were very happy to see those scalps, and thought it was a very beautiful view. However, no white woman would ever consider it beautiful if her husband had bloody scalps on his belt. She would be horrified, and would consider that view one of the ugliest in the world. Kant develops his study of the beautiful around four main moments. According to Kant, the following aspects give a full characteristic to the beautiful: 1) Taste is the faculty of judging of an object or a method of representing it by an entirely disinterested satisfaction or dissatisfaction;

2) The beautiful is that which pleases universally without the necessity of having a concept; 3) Beauty is the form of the purposiveness of an object, as long as this is perceived in it without any representation of a purpose; 4) The beautiful is something which without any concept is cognized as the object of a necessary satisfaction. Hume and Kant express a viewpoint that it’s important to clarify the nature and role of reasons and criticism in aesthetic contexts. The critic has to identify the sources of the work’s aesthetic qualities, and to determine what responses are appropriate in such a case.

However, the aesthetic reason-giving is very different from reason-giving in other contexts and has a number of specific features which make it hard to understand. Unlike moral reason-giving, it doesn’t make any use of rules. It also doesn’t use induction and generalizations, like reason-giving in science. Even the notion of consistency cannot be applied to aesthetic judgements: for example, liking comedies doesn’t mean that one will not like detective stories. All the mentioned statements lead us to the conclusion that aesthetic reasons operate independently from all the conditions which appear integral to the very concept of reason.

Both Kant and Hume argue that art criticism must be unprejudiced. This opinion is represented by the term of disinterestedness which Kant introduced. According to Kant, the term disinterestedness refers to what a person makes out of the representation of an object disregarding one’s dependence on the object for existence, passing judgment on such grounds presents the basic principle of Taste. This means that calling something beautiful is concerned not with the object’s practical function but rather what one makes out of it (on an aesthetical ground- subjective) in oneself.

In opposite to disinterestedness, interest is “satisfaction which is combined with the representation of an object”, related to desire. The understanding of Kant’s position has been impeded by a failure to respect his distinction between 2 terms: what is “interested” (depends on an interest) and what is “interesting” (produces an interest). Kant argues that delight in the beautiful is disinterested and uninteresting. The fact of it being uninteresting alone distinguishes it from other pleasures. Disinterestedness distinguishes delight in the beautiful from what he calls love for the good but not what he calls love for agreeable.

Delight in the agreeable doesn’t depend on a prior interest. The attempt to find a distinctive feature of delight in the beautiful as a pleasure has to be defeated, regarding Kant’s own thesis of the priority of judging to feeling. Hume never uses the term disinterestedness in his works but he also considers that art criticism must be unprejudiced. According to Hume’s opinion, the statement that “The beauty is in the eye of the beholder” is not true. Hume’s views offer a total refutation of this principal.

The view that the beauty is in the eye of the beholder means that the person who is criticizing some work is always prejudiced because his subjective opinion of the work influences his idea of the work. This statement argues that the beauty is not in the work itself but in the eye of the person who is prizing it. Thus, if the beholder doesn’t see any beauty, there turn out no beauty in the object. Hume completely disagrees with this statement, and has a different point of view. In his opinion, the critics of art has to be totally unprejudiced, the critic shouldn’t have any interest in this subject.

If the work is a masterpiece, than is has to be objectively outstanding, and not just for a particular critic. If only the critic sees the beauty in the work, it doesn’t mean that it will be generally accepted as outstanding, unless the general opinion of the work turns out the same way. Kant and Hume have made very important contributions into the theory of aesthetics. As investigations have shown, this field is very dynamic, and requires lots of research. Hume’s opinion of aesthetic judgements builds on what he says about moral goodness and moral judgement.

Kant focuses on the conceptions of disinterestedness, delight in the beautiful, relations between judgement of taste and relative judgements, and other issues. All the investigations provided by the authors present a sophisticated view on the problems of taste and beauty, and give a complex research of all the problems with which aesthetics is dealing.

Hume and Kant Opinions of Taste and Beauty. (2017, Mar 26). Retrieved from https://studymoose.com/hume-and-kant-opinions-of-taste-and-beauty-essay 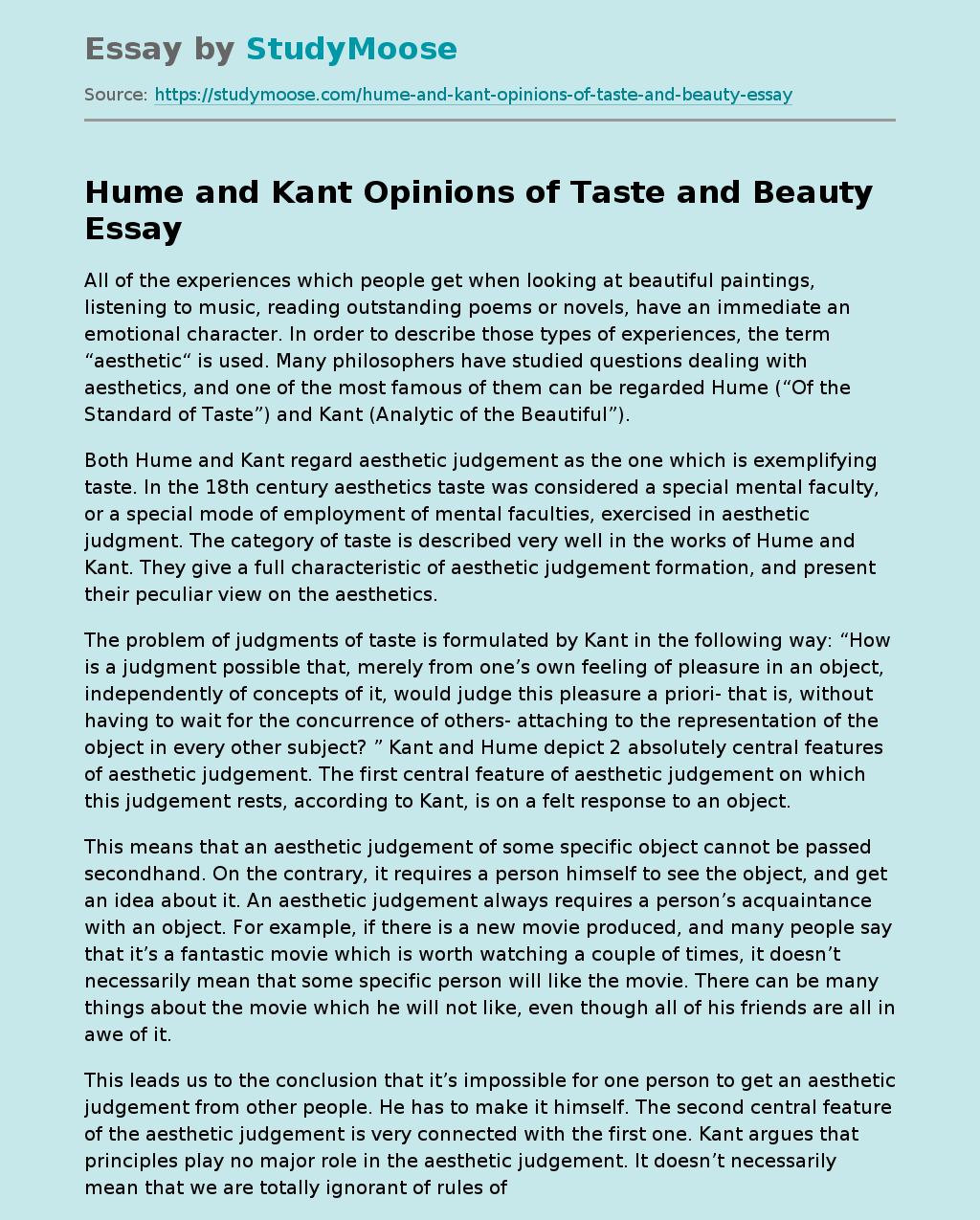