In the Grounding for the Metaphysics of Morals, by Immanuel Kant, Kant proposes a very significant discussion of imperatives as expressed by what one “ought” to do. He implies this notion by providing the audience with two kinds of imperatives: categorical and hypothetical. The discussion Kant proposes is designed to formulate the expression of one’s action. By distinguishing the difference between categorical and hypothetical imperatives, Kant’s argues that categorical imperatives apply moral conduct in relation to performing one’s duty within the contents of good will.

Don't use plagiarized sources. Get your custom essay on
“ Kant Hypothetical and Categorical Imperatives ”
Get custom paper
NEW! smart matching with writer

According to Kant, the representation of an objective principle insofar as it necessitates the will is called a command which formulates the notion of an imperative . Imperatives are simply a formula of a reason. It determines the will of the action. Imperatives can be expressed in terms of what ought to do. For example, take the command “Sit Down! ” Kant expresses this command as an imperative by stating, “You ought to sit down! ” All imperatives are formulated by doing an action according to the standard of a will that it will provide a good ending in some way.

“If” is considered the antecedent and “then” is considered conditional. Hypothetical imperatives tell us what we should do provided the fact that we have certain desires. For example, “If you want to get an A, then you ought to study. ” Wanting to get an A is required of one insofar as one is committed to studying. In other terms, if one desire is to get an A then the action one must take is to study in order to fulfill that desire. Hypothetical imperatives can further more be explained by breaking them down into what Kant calls “rules of skills,” and “counsels of prudence”.

Rules of skills simply imply the notion that there is something that you have to do; how one must accomplish something. An example of this is, “If you want to get well than you ought to take your medications. ” The action in accordance to the rule of skills implies the importance of taking your medications. Kant noted that there is no question at all whether the end is reasonable and good, but there is only a question as to what must be done to attain it. Moreover, the counsel of prudence examines just that. The antecedent “If” refers to the varying degrees of happiness within an individual.

“If you want to be happy then you ought to invest in a retirement plan. ” One’s motive to be happy (happiness as it implies to individualism) is fulfilled through the action. The action is done through the perception of prudence as it commands not absolutely but only as a means to further the purpose. In this respect, hypothetical imperatives apply actions of good in a conditional way. It is formulated that you need to know what the condition is before you act. Conditions are based upon a posteriori referring to experiences of knowledge due to ones own result.

Unlike a hypothetical imperative, categorical imperatives rely on independent experience; a prior. This is due to the fact that one’s moral principle is not based upon previous experience, but instead it is rooted in good will and one’s ability to perform their moral duty. Kant refers to this principle as the principle of morality. For it is from this in which all our moral duties are derived. The basic principle of morality is important because it commands certain courses of action. It is a categorical imperative because it commands unconditional actions. It is also independent of the particular ends and desires of the moral actions.

One can never really no the end motivate to why such an action is preformed, but one can concure that the action was done according to the moral duty of good will. Having good will or practical reasoning, lays a foundation that implies categorical imperatives to do what is pure and simple. A good will is good not because one wants to attain happiness or a purpose but it is good in itself. Kant explains that there is no possibility of thinking of anything at all in the world, or even out of it, which can be regarded as good without qualification, except a good will.

Therefore in accordance to good will, one must act as if the maxim of their action was to become a universal law. Kant first mentioned the notion of categorical imperative when he proposed the moral or universal law. You should never act except in such as way that I can also will that my maxim should become a universal law. Since maxims are basicly principles of action, the categorical imperative commands that one should act only on universal principles, that could be adopted by all rational agents such as human beings.

Actions that are done from duty are out of respect for the moral law. Duty is the necessity to act out of reverence for the law set by the categorical imperative. Because the consequences of an act are not the source of its moral worth, the source must be the maxim under which the act is performed, excluding all aspects of desires. Thus, a categorical imperative must have moral content if, and only if, it is carried out solely with regard to a sense of moral duty in coordination with good will. Clearly one can see that Kant believes in the expression of actions through imperatives.

By proposing imperatives, he formulated a command of reason. As hypothetical imperatives address actions done for a desire or a purpose, categorical imperatives, on the other hand address actions that result from moral conduct and good will. In distinghing the difference between these two imperatives, Kant’s main objection is to provide his readers with a clear understanding that actions based upon imperatives can be projected from two different views but the end result always provides good, in some way. 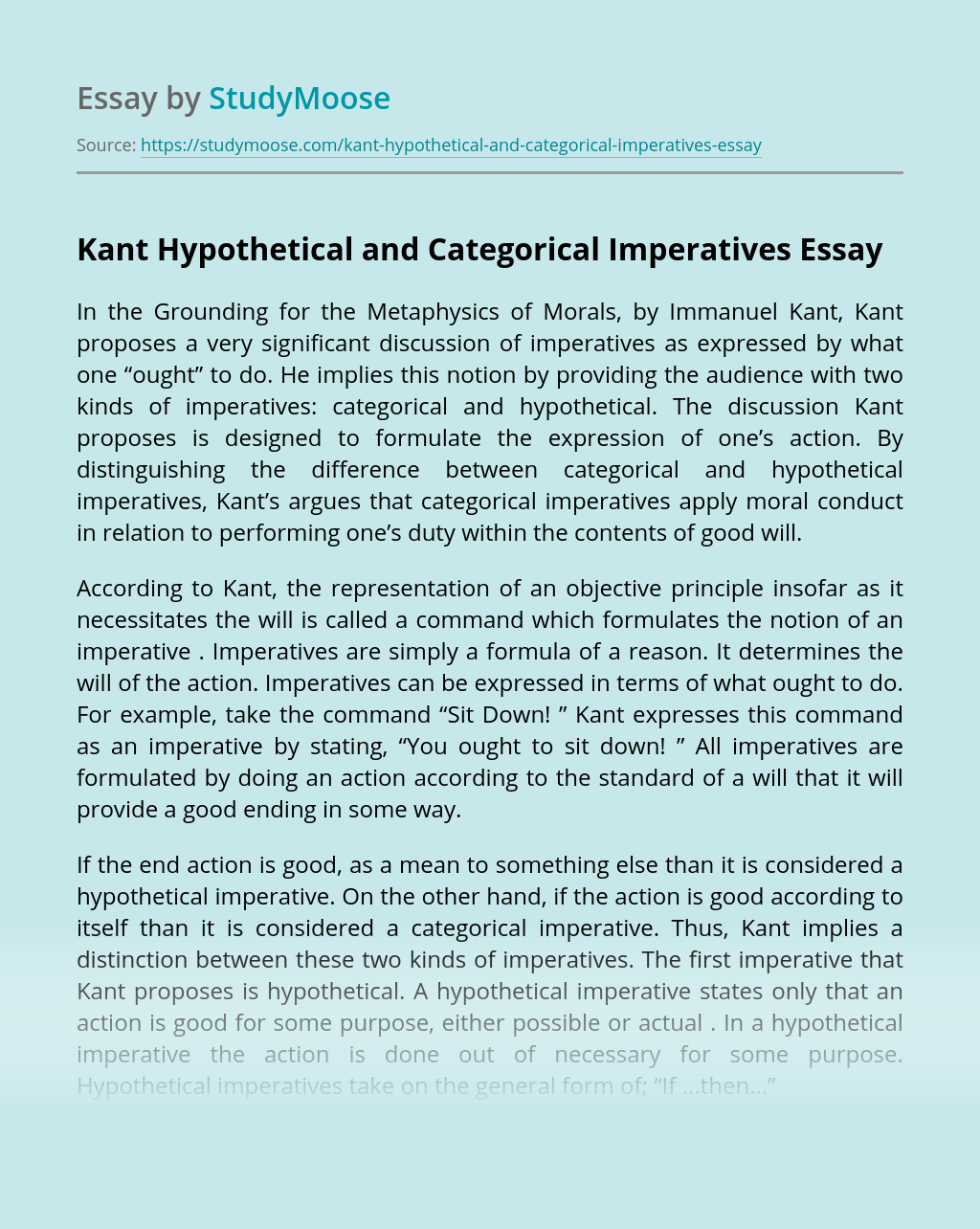