One day on the way home from work, I was driving on the freeway. I passed a car that had broken down and was sitting on the side of the road. There was a lady and her two littlechildren that were stranded. It was hot outside and I stopped to see if I could help. I gave them a ride to their house, made sure that they would be ok and then I left. I never saw them again. I didn’t know this family; I didn’t stop because I thought that I may win an award or get famous because of it.

Turn in your highest-quality paper
Get a qualified writer to help you with
“ Helping Others ”
Get high-quality paper
NEW! AI matching with writer

I stopped because I have been in that position before and know how it feels to be stranded with your children. Why would someone help another person whom they don’t even know? There have been some controversial theories on the helping of others. One theory is from the egoists. A major believer in the egoism theory is the famous author, Ayn Rand.

Proficient in: Helping Others

She believes that a person should only help another person if they hold value to them, or if in helping them they will receive something in return, which is all supposed to relate to one’s own happiness. Egoism claims that each person has but one ultimate goal: his or her own welfare. This theory also implies that not everyone can be an egoist. It relies on other people being altruistic. Most altruists believe that each person has an obligation to give pleasure and take away the pains of other people.

Altruism involves the unselfish concern for others. It entails doing things only out of a desire to help, not because one feels obligated to do so because of loyalty, duty, or religious reasons. Altruism involves true selflessness.

The sacrifice of one’s own welfare for the welfare of another is what this theory is about. Rand believes, as do most egoists, that an altruistic person has low self-esteem and a lack of respect for other people. I can’t see how this could be true. I think that one would need to have some self-esteem in order to risk their lives for others. And in reference to the lack of respect for others, I think that is exactly the opposite of the reality: respect for others would seem to be a driving force behind altruism. I do not agree with Rand and the egoism point of view. I wonder what the world would be like if there were more people who follow egoism. Would the heroes of the world not exist? What would happen to us all? If every person were out for themselves and didn’t care about others, except for what they would get out of being nice, what a mean and selfish world this would be. Would there have to be more altruistic people in order for our world to survive? I hope not. I truly would hate to live in a world like that, mainly because a person, me included, would either have to be the egoist or the altruistic and I don’t want to be either one of those.

There have been many stories about the brave people who helped to rescue wounded and trapped victims under the ruins of the twin towers, September 11, 2001, after the terrorist attack. I believe that these heroes did this because of their concern for others. I don’t believe that the rescuers would have time to stop and figure out their priorities and possible gains from helping the victims. They acted immediately and ran in there regardless of the danger to themselves. Most of the rescuers had no idea who they were rescuing, nor what would happen to themselves once they got into the rubble. If there were egoism principles applied to this rescue, would anyone have been saved? I believe that unless there was some kind of reward offered, not as many people would have been rescued. I don’t know how an egoist could have friendships or ever find real love. What kind of parent would an egoism enthusiast make? I believe that the child would definitely suffer and ultimately end up being altruistic.

Living under a dominating and controlling person would be horrible, and it would cause low self-esteem and lack of respect for others outside of the relationship. I think that the less respect you show another person, the less respect that person has for others. On the other hand, I think the altruistic person is the one who gets walked on all of the time and used. This would not be good either. What kind of real relationship can one have if they are never concerned for their own welfare? I would think that it would be a very one-sided relationship. Personally, I believe that there has to be some balance between the two theories. I think that egoists are selfish, and I would not fit into that category. I do not believe that I would fit fully into the altruistic category either. It would be really difficult to be fully one way or another. The theories of egoism and altruism are contradictory to each other.

I don’t believe that being fully one way or the other could provide true happiness. If there could be a society that is fully altruistic or fully egoistic, then I think our ethical system would not work. I believe that my life shows a mix of the two theories. I look out for myself, while at the same time I look out for my children and animals. My family knows that they are most important to me, but they also know that I am important to myself. I don’t think that I could take care of my family if I did not take care of myself at the same time. Self-respect and healthy self-esteem are important to me.

Helping Others. (2016, Mar 11). Retrieved from https://studymoose.com/helping-others-essay 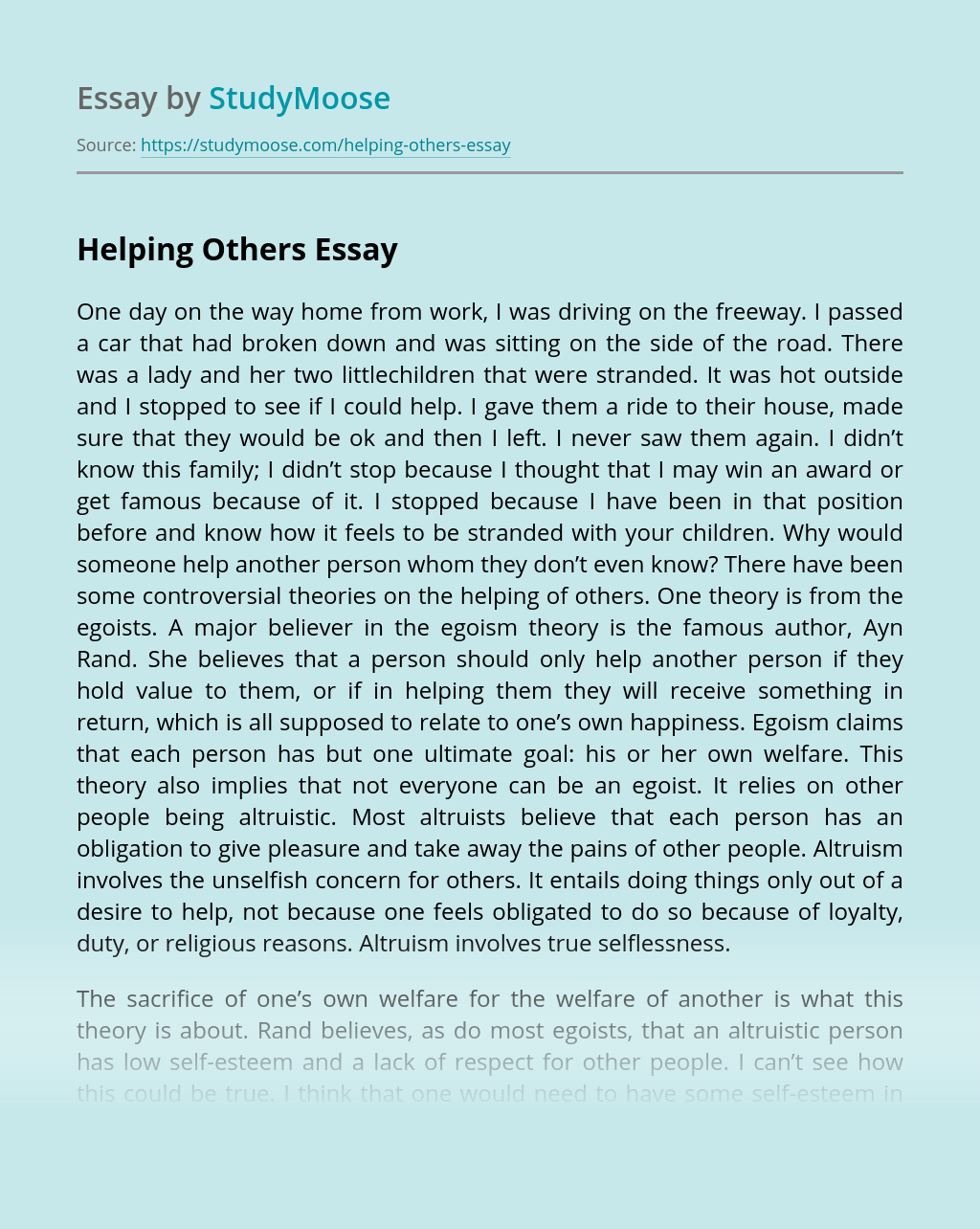 Turn in your highest-quality paper
Get a qualified writer to help you with
“ Helping Others ”
Get high-quality paper
Helping students since 2015
Stay Safe, Stay Original