Giving constructive feedback is crucial; without it learners cannot learn (Rogers, 2004). When used to emphasise progress rather than failure, it motivates learners, building confidence and enabling them to recognise mistakes as part of a process that brings them closer to their learning goals. It can help both teacher and student to identify further learning opportunities or action to be taken.

Feedback can be formal, such as after marking an assignment or observing practice, or given informally during a lesson (Gravells, 2012.) It can also be written or verbal.

Don't use plagiarized sources. Get your custom essay on
“ Importance of Constructive Feedback for Further Learning ”
Get custom paper
NEW! smart matching with writer

Written feedback provides a record of achievement and enables students to revisit comments later and measure relative progress. However, unless clear, it may be misinterpreted or demotivating. If too lengthy, it can confuse. It takes time to provide written feedback too and, in the meantime, the learner may continue to make the same mistake and then wastes more time unlearning their response instead of learning new behaviours (Gravells, 2012). Petty (2009) recommends that written feedback is detailed and constructive, and that teachers also talk to students about their work as assignments are handed back to clarify points.

Verbal feedback is more immediate, particularly when provided during a session. Positive body language, facial expression, tone of voice and a supportive approach can help to create “positive reinforcement”, which can enhance future learning (Petty, 2009). Tutors need to be skilled at providing verbal feedback though, as body language can just as easily lead to comments being misconstrued.

Verbal feedback also needs to be given at the right time and place, as well as promptly to prevent errors being repeated (Rogers, 2004).

Enough time needs to be given for students to understand the feedback and compose any questions. Avis, Fisher and Thompson (2010) say that verbal feedback should form part of a two-way dialogue, an approach that can be enhanced by allowing the student to assess their work first. This boosts morale by giving the student ownership of the solution. It also develops a student’s ability to carry out future self assessment and encourages reflection. Lastly, it allows the teacher to gauge how much the student has understood. This helps when setting future goals that are challenging but achievable – crucial to engagement.

Focusing on only two or three key points during feedback means students are not overwhelmed by any critical comments, preventing them from becoming dispirited (Avis, Fisher and Thompson, 2010). There is also a limit to how much new information a learner can grasp at once. Praising what the student has done well, outlining areas that need further development and then ending on another positive note will motivate the student and help prevent them focusing on any aspect they may perceive as negative. Petty (2009) says this makes feedback sound more like advice and less like criticism.

For oral feedback to be constructive, it must be clear, jargon free, factual and provide reasons for any success or failure so that students can act upon any areas that require improvement.

This is supported by research conducted by Weeden, Winter and Broadfoot (2000 cited in Avis, Fisher and Thompson, 2010, p.172) involving 200 learners, aged from eight to 19. The study found that simple comments, ticks or evaluative comments such as “good work”, while welcomed by students as approval, did not help them reach future goals. If feedback focuses on what has been and what could be achieved, rather than criticising failure, learners are also far more likely to be motivated. Wallace (2006, p.84) refers to this as “celebrating success”.

Rogers (2004, p.44) argues that the most crucial aspect of constructive feedback is to “criticise the performance, not the person” as subjective comments can be viewed as personal prejudices, demotivating and devaluing feedback in the eye of the learner.

Huddleston and Unwin (2008) also point out that feedback should take place throughout the teaching cycle. This means that the teacher can review achievement and areas for development as a course of study continues, enabling the student’s development to be ongoing.

Feedback can also be given directly to the individual, on a one-to-one basis, or indirectly as part of a group. An advantage to giving feedback to a group is that, providing the group is supportive and committed to high standards, peers can offer each other constructive feedback (Rogers, 2004). For some learners, this may be highly motivating and it also offers more diversity in how learners receive their evaluation. However, the learning environment must be non-competitive and inclusive to avoid alienating learners and ensure everyone is treated equally and with respect. To keep students motivated, feedback given to individuals during group discussions must be non-judgemental. Comparing students with their peers should be avoided (Avis, Fisher and Thompson, 2010). Petty (2009) recommends that during group questioning, questions are distributed as widely as possible so that everyone feels involved. It follows that, in a safe and inclusive learning environment, feedback should also be possible through group questioning or discussion.

It is also vital that all students’ individual needs are considered. For instance, if a student is dyslexic, written feedback must be provided in a format that works for them, perhaps on coloured paper. Students who are blind may prefer verbal feedback or require feedback in Braille.

Finally, feedback must be tailored. Brown and Knight (1994 cited in Gray et al., 2004, p.108) outline how students with different learning styles have different expectations of feedback. “Deep” learners will require detailed feedback to enable understanding; “surface” learners will expect general comments and will not appreciate the relevance of detailed feedback; “strategic” learners will not welcome detailed comments but need mark-related comments that indicate what they need to do to achieve a better mark; and “apathetic” learners need comments that encourage them to improve and build their confidence. This points to the need to make feedback diverse and customised to learners’ personalities and needs (Avis, Fisher and Thompson, 2010) at any given point in the teaching cycle, just as teaching methods must be diverse. This is crucial if feedback is to be understood by students and to maintain their self esteem. 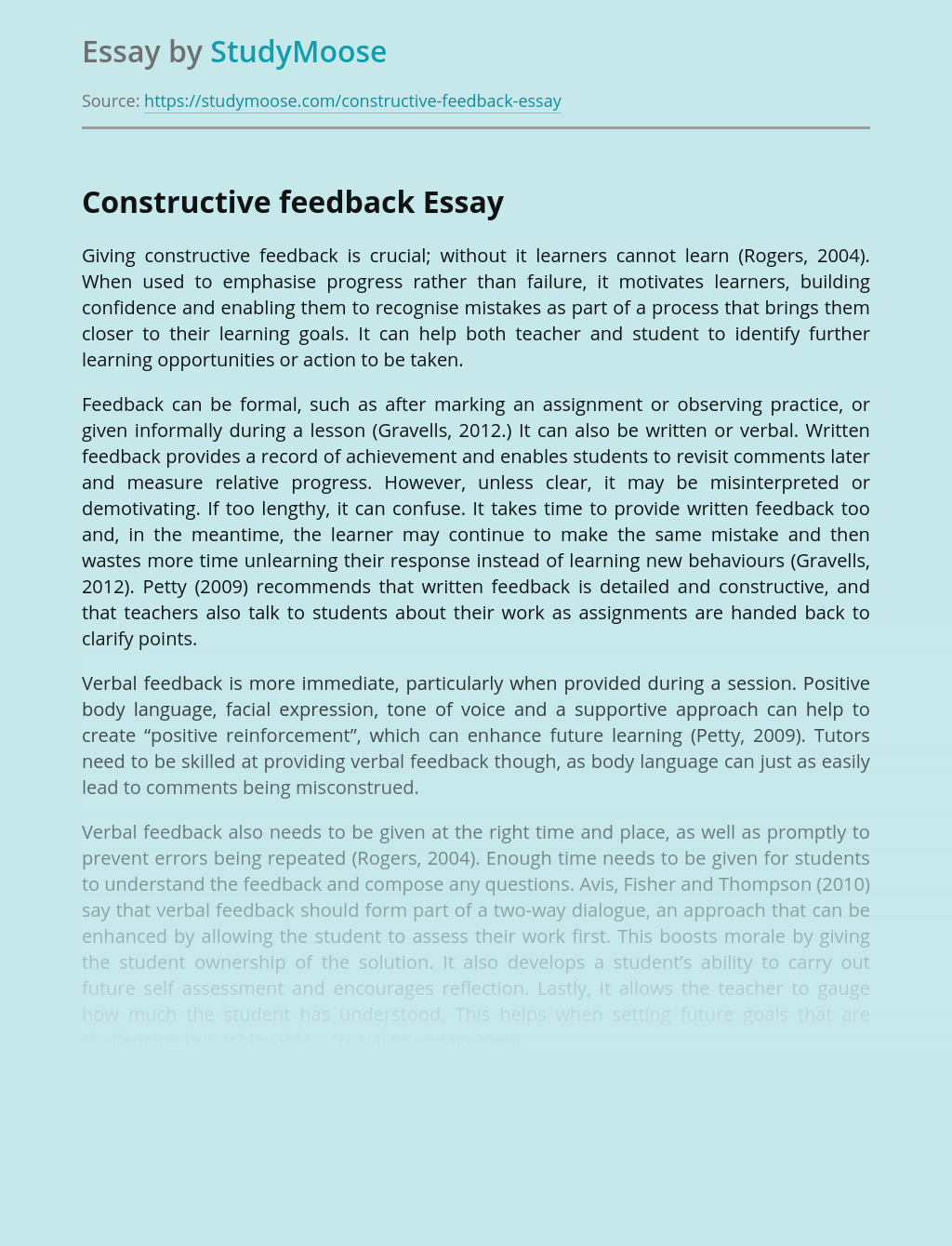