memory is a constructive and active process

Memory is a subject that has been of much interest to psychologists for many years and various research has been carried out in aid of trying to understand how memory works. It can be understood that memory is compromised of three processes and three key subsystems which enable it to work and perform efficiently on a daily basis. The encoding process is where information is retrieved via what is known as sensory memory which is encoded either visually or semantically by attaching a meaning to a word.

Don't use plagiarized sources. Get your custom essay on
“ memory is a constructive and active process ”
Get custom paper
NEW! smart matching with writer

In terms of storage of memory, the information in the sensory memory is either held in short term memory where it can be recalled for a few minutes or long term memory where it can be recalled for several decades. However a topic of much debate is whether memory is a constructive or passive process. Memory as an active process can be explained as the concept of memories being altered, distorted or even constructed from external sources whereas passive memory is where information is recalled exactly as it is encoded.

A claim has been made that memory is active and constructive therefore in order to evaluate this claim it is important to consider the relevant studies carried out in this area of cognitive psychology. (Brace and Roth, 2007)

When looking at the processes involved in memory, it is clear that the circumstances play an important role in whether retrieval becomes an active or passive process. When information is unfamiliar or leading questions are asked about memories, this can affect our recall and the memories can become distorted which implies a constructive aspect when recalling information.

When looking at short term memory specifically, it becomes clear that there is a conscious and active aspect to the process therefore supporting the claim at least partially that memory is constructive. This is demonstrated in Baddley and Hitch’s model of short term memory (as cited in Brace and Roth 2007) they claim that the short term memory is comparable to a “workbench” concept where new information is mixed with old memories and stored information in order to carry out a variety of processes depending on the specific circumstances. The main weakness with this theory or concept is the inability to visually see what is occuring in the brain. Although we can look at PET scans and see relative differences in the posterior Hippocampus when investigating the active part of memory as can be seen in Maguier et al’s study (as cited in Brace and Roth 2007) of taxi drivers where that specific section of the brain was enlarged. We are still unable to see the actual information being encoded or stored however the speculation and theories put forward support the concept of some aspects of short term memory being constructive.

Moving onto the main memory processes, Bartletts “The war of the ghosts” study (as cited in Brace and Roth 2007) is particularly relevant when evaluating the claim of memory being an entirely constructive and active process. He chose a story specifically aimed to contain unfamiliar concepts to the participants. This allowed him to examine the effects of social and personal experiences on memory and recall. This study supports the concept of memory being constructive and dynamic because the evidence shows that instead of the story being encoded and stored in a manner that allowed the participants to recall it accurately and undistorted, the participants used previous experiences and concepts that made sense to them in order to encode and retrieve the information.

This distortion or transformation of the facts directly points to memory being active as during the processing of the story, it is likely that elaborative rehearsal played a part in the method of encoding and storage as the participants were linking information to existing knowledge in order to make sense of the story. However it is important to consider there was no control over any of the variables in the study therefore the findings from the experiment would be difficult to measure in terms of accuracy and reliability in relation to the claim proposed.

Further support for the claim comes from a study carried out by Loftus and Palmer (1974, as cited in Brace and Roth 2007) which was designed to look at the effect of leading questions and the influence of linguistics on our memory of events. This study further supports the concept of memory being constructive as the information is being distorted through the participants own experiences, this shows that the memories are not being recalled accurately but are being recalled in a manner that the participant is merging past experiences and knowledge along with the study material.

This combined with the suggestive nature of the verbs used could also affect the retrieval of memories by misattributing the source resulting in the participants believing something that may not be entirely accurate, in this case the speed of the cars and presence of glass in the video. Although when interpreting the findings, it is important to consider the confounding variable of individual differences I.e personal perception of speed which could effect the validity and generalisability of the data. The study also lacks ecological validity as witnessing the car crash via a media source would not evoke the same emotional response as a witnessing it first hand, which could effect the quality and detail of the information stored.

In contrast, certain aspects of memory imply a passive aspect of memory as some types of memories are accurately stored and recalled with little or no distortion and rarely forgotten. In the Bahrick et al (1975, as cited in Brace and Roth 2007) study which looked at the recollection of faces and names of people from their graduating classes it was found that even after 35 years there was almost no forgetting and accurate recall of names and faces. This Study supports the aspect of memory being a passive process as the information encoded is being recalled accurately and over a long period of time. These types of memories are classed as enduring memories and little or no loss or distortion occurs until very old age where other factors could be responsible. However a weakness of the study was that it only tested names and faces which is a small representation of the types of knowledge stored in long term memory so would be difficult to apply the findings to all aspects of long term memory.

Brown and Kulik (1977, as cited in Brace and Roth 2007) created the term ‘flashbulb memories’ in relation to autobiographical memories and carried out an experiment to demonstrate this theory. This experiment focused on events that are surprising and provoke strong emotional responses. This study further supports the notion of memory being passive as long as certain conditions are met. In this particular case the event has to be important to the individual and has to evoke a strong emotional response. As long as these conditions are met an individual is able to store and recall their memories of the event very accurately or at least the reception of the event i.e. who they were with and when they first found out etc.

The emotional aspect of the event and the importance to the individual means the information can be recalled exactly as it was encoded with little or no distortion. However, it is important to consider that the rehearsal effect may play an important part in the storage of the memories due to the emotional nature of the event it is possible that these memories are replayed or rehearsed more often than other memories.

After evaluating the evidence in relation to the claim that memory is constructive and active, taking into account both the results and the inherent problems with the studies methodology the conclusion has to be drawn that whilst some aspects of memory are indeed constructive there are also passive elements in all three processes of memory. The studies carried out on the retrieval process of memory certainly show strong indication of memory being constructive and show that memories can be altered or distorted by a variety of factors meaning the information retrieved is subject to change. However looking at both the encoding and storage processes these have been shown to have both passive and constructive elements depending on the circumstances such as emotional responses and personal relevance. Therefore looking at memory as a single entity, it has to be seen as an amalgamation of both constructive and passive elements. (Brace and Roth, 2007)

memory is a constructive and active process. (2016, Mar 13). Retrieved from https://studymoose.com/memory-is-a-constructive-and-active-process-essay 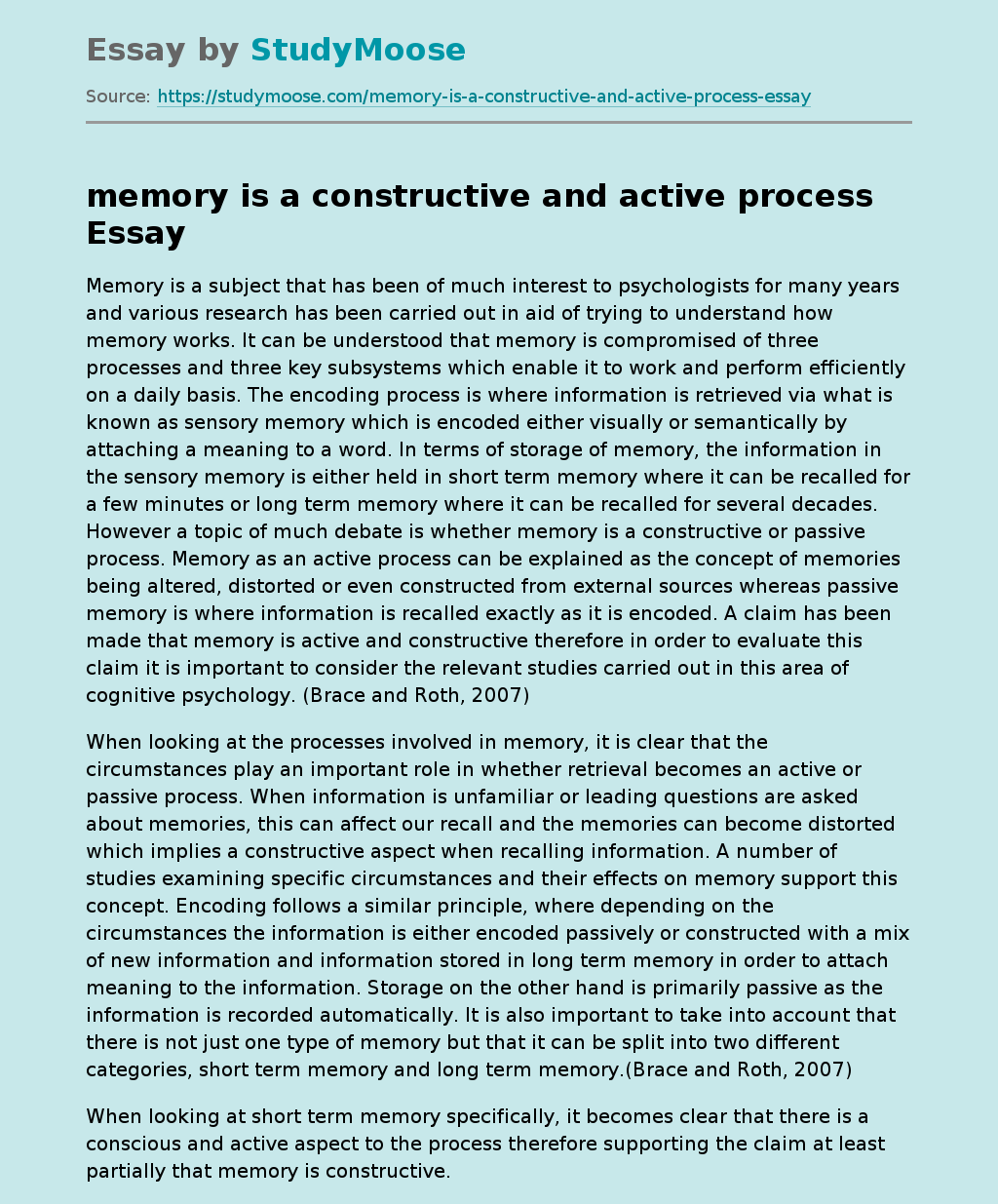