Personality Analysis on 'The Breakfast Club'

Released in 1985 and directed by John Hughes ‘ The Breakfast Club’ is a film about teenagers that seem different on the surface but come to discover otherwise . When five students from different high school cliques are forced to spend their Saturday in detention, the brain, athlete, basket case, princess and the criminal together are faced with the question of who they think they are. The five characters put aside the ir dissimilarities in aid to survive the painful eight hour detention and in the process they discover they aren’t as unalike after all.

Don't use plagiarized sources. Get your custom essay on
“ Personality Analysis on ‘The Breakfast Club’ ”
Get custom paper
NEW! smart matching with writer

The Breakfast Club is a n all time classic film that portrays a number of individual and complex personalities. It is visible in the film that each teenager has their own traits and characteristics due to various circumstances such as; environmental and parental influences .

The character focus will be John Bender, the so-called ‘the criminal’ of the five teenager s . Upon first glance, Bender seems to be the average high school ‘bad boy’ getting his position in this specific detention for pulling a false fire alarm .

This gives viewers th e idea that his character does whatever he can for attention. Bender also has a tendency to say and do things that will get a negative reaction out of a person, by insul ting and antagoni sing every character at some point in the film . By applying Maslow’s hierarchy of needs and B. F. Skinner’s theory of personality you ge t a more intellectual psychological understanding of Bender’s personality.

Abraham Maslow developed his Hierarchy of Needs theory in 1954 to help himself and other humanistic theorists to better understand what motivates people. Maslow believed that people are motivated to satisfy specific needs, in saying this he created a five stage pyramid that depicts the order of importance of these specific needs. Maslow has suggested that o nce one need or category is satisfied and fulfilled by person they can then move on to fulfilling the next need . (McLeod 2007)

Thus according to Maslow; if a person does not fulfil their basic physiological needs they lose motivation to satisfy belonging and esteem needs. When this occurs the person feels a disinterest to socialise and make friends, typically leading in said person to become disrespectful and inconsiderate of the feelings of others and their opinion. (NetMBA 2010)

Bender is clearly portrayed throughout the film as a person who has failed to meet the first two basic needs of the hierarchy table; refer to figure 1 . In the film, when lunch break is commenced it is showed that Bender has come with no food for lunch, whilst the other characters have all got substantial packed lunches. This could be classified as a sign that shows that Bender’s physiological needs are not being fulfilled. When Bender pulls out a pocket knife during a heated discussion you get the idea that Bender clearly doesn’t feel safe and that he needs a weapon as form of protection, showing that Bender is clearly lacking a sense of security and safety .

Further construction of the idea that Bender does not have substantive or rewarding home life takes course when Bender shows the group a scar on his fore arm, given to him by father as mere punishment for accidentally spilling paint in the garage.

That being said, it is seen throughout the film that Bender is failing to adequately satisfy his physiological and safety needs, leaving him disinterested in fulfilling social needs and lacking in self-esteem and respect. Bender’s lack of motivation in socialising and making friends is the most dominant aspect of his ‘bad boy’ personality, he constantly insults the other characters in the film about things that genuinely upset them -evidently pushing them away. Bender also suffers from low self-esteem which is why he compensates by putting on a tough, ‘bad boy’ front. You see this through the way in which he dresses, disobeys the Principals orders, constantly challenge s another male character and also in the way that disrespects the school and its property.

In behavioural theorist B. F. Skinner’s perspective; an individuals personality development is heavily influenced by their environment and prior experiences (Sincero 2012) , he wrote that ‘A person does not act upon the world, the work acts upon him’ (Skinner 1971) . Skinner proposed that the development of an individuals personality is largely dependant on the way in which significant adults in their lives would reward or punish then throughout the course of their childhood. (Carter Grivas 2005, p. 407-408) Therefore, children and adolescents raised by abusive and aggressive parents are more inclined to also be come aggressive and hostile towards peers. (Hellesvig-Gaskell n.d)

Throughout The Breakfast Club (Hughes 1985) there are multiple scenes that express the negative home life in which Bender is being raised and how it is influencing his personality.

In a specific scene Bender imitates a previous heated discussion between him and his father and according to Bender his father called him “stupid, worthless, no good, goddamn, freeloading son of a bitch. Retarded, big mouth, know-it-all, asshole, jerk” then Bender pantomimes getting punched in the face by his father as a result of Bender retaliating. In a behaviourists perspective this would justify

Benders aggressive personality and tendency to lash-out and insult the other characters.

When comparing Bender to Brian Johnson; the character portrayed as the ‘brain’ or the nerd of the group, it is visible that as result of polar opposite home environments that Brian and Bender have e qually opposite personalities. Brian’s family are shown as very over supportive and pushy in his school work, yet still compassionate. T his is well symbolised again in the lunch scene of the film when Brian unpacks his nutritious, home-made lunch , whilst Bender has been sent to school with nothing to eat.

Brian’s personality comes off as very timid and anxious, and not once throughout the film does Brian retaliate towards Bender when he acts in a hostile or cruel manner- although if the roles were reversed and Brian was acting in a similar fashion toward Bender he w ould lash-out violently or show signs of aggression in return , just as father would to him. By comparing Brian’s personality with Bender ‘s; you come to understand the impact an abusive home environment and negative parental influences has on Bender’s personality.

In conclusion, the application of Maslow’s humanistic perspective and Skinner’s behaviour ist views

help to understand Bender’s personality efficiently. Discarding the point that both theorists completely contradict one another they both give a deeper explanation into why Bender chooses to be insulting and why he lacks interest in making friends, along with justifying Bender’s rage and aggression struggles. Overall humanist and behaviourist theories on personality assist in the process of understanding and evaluating the personality that makes John Bender of The Breakfast Club. (Hughes 1985)

Personality Analysis on 'The Breakfast Club'. (2016, Aug 11). Retrieved from https://studymoose.com/personality-analysis-on-the-breakfast-club-essay 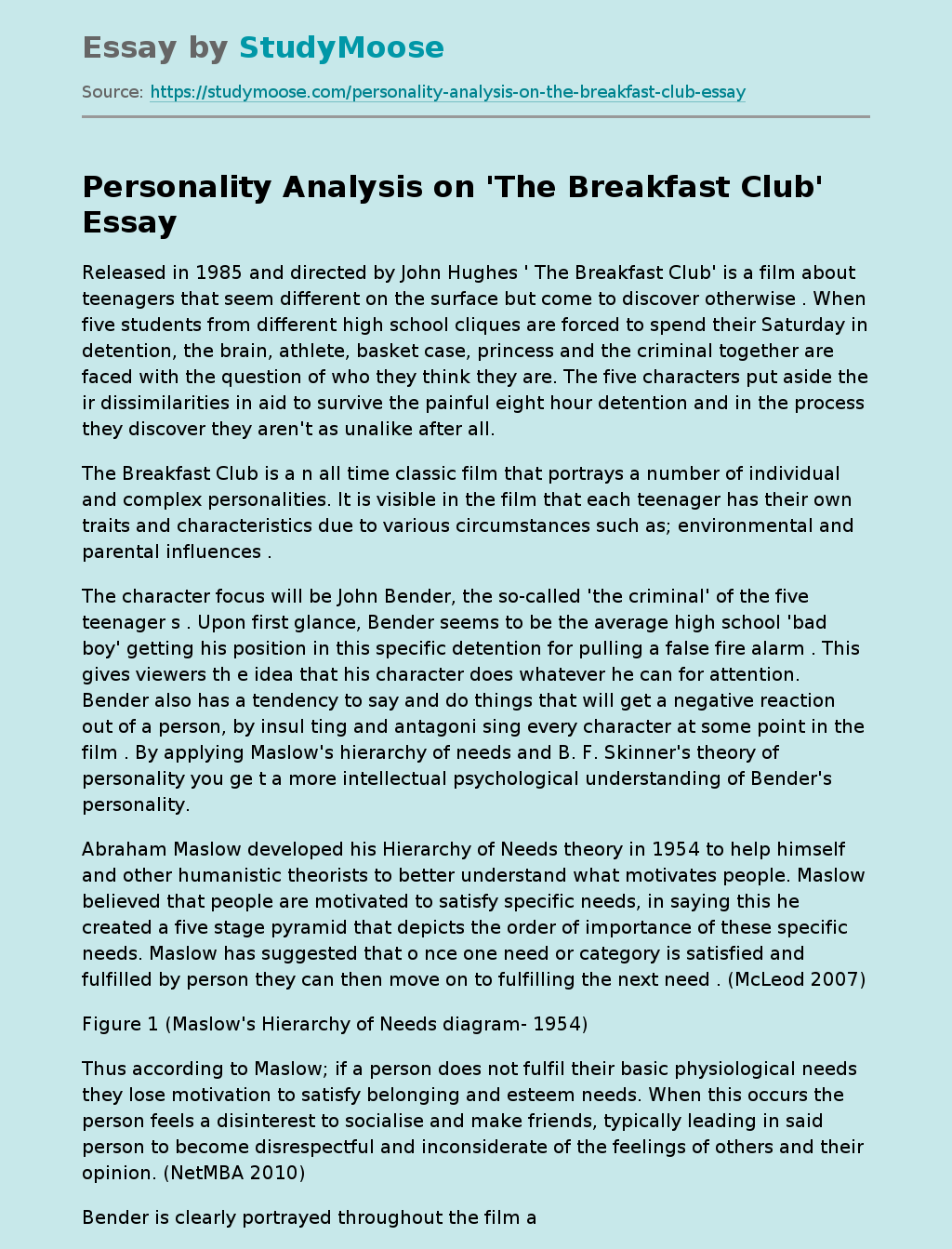