Personality theories, or models, are metaphors for describing something which is intrinsically indescribable, the human personality. Currently, one of the most popular approaches among psychologists for studying personality theory is the Five-Factor Model (FFM) or Big Five dimensions of personality. This essay will explore the ‘Big Five’ personality constructs and seek to explain how useful they are to understanding how people are likely to perform in a work situation. In conclusion, this essay will also discuss some of the arguments against the relevance and accuracy of personality testing within the employment context.

Turn in your highest-quality paper
Get a qualified writer to help you with
“ The Big Five Personality Constructs ”
Get high-quality paper
NEW! AI matching with writer

The Five-Factor Model originated in an attempt to compile trait-related terms as researchers were dissatisfied with the trait like differences in adaptational styles. Instead they focused on situational based approaches that offered greater flexibility in explaining specific person-environment transactions (Goodstein & Lanyon, 1999), including those within the employment and the workplace.

Recruitment is the first part of the process of filling a vacancy. It includes the examination of the vacancy, the consideration of sources of suitable candidates, making contact with those candidates and attracting applications from them.

It is aimed at finding a pool of applicants with the abilities and personality desired by the organisation. Factoring personality into the employment process can result in lower turnover if applicants are selected for traits that are highly correlated with employees who have high longevity within a particular occupation or organisation.

Personality measures are used by many organisations in selecting employees and therefore it is important to properly define how personality fits in with employment and the workplace and how by utilising these factors or dimensions of personality, a small relationship between some of the factors and performance success can be found (Barrick and Mount, 1991).

McCrae & Costa (1996), who originally identified the five constructs of personality, maintain that personality can be described adequately within five high-order traits; extraversion, neuroticism, openness to experience, agreeableness and conscientiousness which can easily be remembered using the acronym OCEAN. Personality traits are the disposition to behave in a particular way, in a variety of situations and are indicators to consistent patterns in the way that individuals behave, think and feel (Weiten 2004). The big five personality model is appreciated most by psychologists and organisational practitioners alike because in contrast to other contemporary models, the Big Five model is primarily a descriptive model.

The big five personality test is a self-answered questionnaire based on the big five model of personality and is an example of an objective personality type assessment. It is said to be objective because the content is structured, the scoring is unbiased and the interpretation of scores is standardised. The Big Five test can reveal more information about applicant’s abilities and interests and can also identify interpersonal traits that may be needed for certain jobs. It is used simply to identify the general personality of an employee by assessing their relative strength in each of the five major traits.

The five-factor model is very employer-oriented, with greater validity in evaluating the employability and employment status of applicants than other models. The stronger the trait in the person, the more likely that person is to show trait-related behaviors and therefore the more likely we are to observe that trait (Goodstein & Lanyon, 1999). Described below are some of the personality traits or characteristics that are uncovered using the test which may describe a current or potential employee’s individual traits;Neuroticism – Neuroticism refers to the tendency to experience negative feelings. Employees who score high on Neuroticism may experience one specific negative feeling such as anxiety, anger, or depression (Carver & Scheier, 2000) but are more than likely to experience several of these emotions as Neuroticism exposes very sensitive individuals. This may in turn create negativity in the workplace.

Openness to Experience – Openness describes a dimension of cognitive style that can distinguish imaginative, creative employees from down-to-earth, conventional employees. Employees who score high with Open are intellectually curious, appreciative of art, and sensitive to beauty. They tend to be, compared to closed people, more aware of their feelings (Carver & Scheier, 2000). These employees tend to think and act in individualistic and nonconforming ways and intellect is probably best regarded as one aspect of openness to experience.

Agreeableness – Agreeableness reflects individual differences in concern with cooperation and social harmony. Agreeable employees value getting along with others in the workplace and are therefore considerate, friendly, generous, helpful (Carver & Scheier, 2000) and willing to compromise their interests with others. Agreeable employees also have an optimistic view of human nature and believe others are basically honest, decent, and trustworthy.

Extraversion- Extraversion is marked by pronounced engagement with the external world. McCrae & Costa (1997) believe there is a good deal of variation in what makes up this factor. Extraverts enjoy being with people, are full of energy, and often experience positive emotions. Extraverted employees tend to be enthusiastic and action-oriented (Carver & Scheier, 2000), like to talk in groups and assert and draw attention to themselves. However Watson et al (1992) state that Extraverts can also be dominant, which isn’t always strongly represented in this factorConscientiousness – Conscientiousness concerns the way in which we control, regulate, and direct our impulses.

Impulses are not inherently bad; occasionally time constraints require a snap decision, and acting on our first impulse can be an effective response so in certain occupations this is seen as an advantageous personality trait. Conscientious employees also act spontaneously and impulsively which can be fun in the workplace. As employees, Conscientious individuals can be seen by others as colourful, fun-to-be-with and eccentric (Carver & Scheier, 2000). Conscientiousness also emerges as one of the most consistent predictors of job success among the five factors (Goodstein & Lanyon, 1999).

It is important to note that none of the personality factors are in themselves good or bad, merely differences which make some personalities more suitable for certain jobs or activities than others. All of the five factors are dimensions, not types, so people vary continuously within them (McCrae & Costa, 1997) with most people falling in between the extremes. The Big Five test can also provide a helpful insight for an employee to know their own placement within the five factors (Costa & McCrae, 1992) and is a useful tool for personal improvement and can be a good predictor for future career choices. An organisation will begin to suffer if poor selection of new employees recurrent, however, it can be even more expensive if an incompetent or unhappy worker remains.

There is considerable debate as to how many trait dimensions are necessary to accurately describe personality (Goodstein & Lanyon, 1999) and some theorists are critical of the big five model. They argue that the five-factor model can be seen to focus on stability of personality, but it does not discuss changes in personality. Theorists are also concerned about whether the five personality descriptors cover the whole personality domain (Lievens et al, 2001).

As the Big Five model has only recently been implemented it is uncertain how useful the five factors will be in distinguishing among the different types of personalities that will be successful in many occupations. There is also scepticism over people’s ability to report accurately when giving a self-evaluation. Pervin, 1994 (cited in Carver & Scheier, 2000) suggests that many trait theorists would believe that there is more to personality than the Big Five, for example, people’s self-concepts, their identities, their cognitive styles, and the unconscious.

In conclusion, this essay highlights the benefits of using the 5-factor model of personality to accumulate and communicate findings in the employment setting. Within the practice of personality psychology, you do not simply label every person in society within the Big Five models domain’s, the five factor model is an introduction to the much wider realm of understanding personality. Just as no two sets of fingerprints are identical, neither are two personalities just alike.

Employing the right person has the potential to, in the long run, save an organisation many thousands of dollars. Clearly the right initial choice will save money by reducing turnover but there are many other costs involved, some less quantifiable than others. This highlights the importance of recruitment and selection of people based on personality. It is in this context that the five factor model has become the dominant theory in personality psychology and seems to offer a systematic, valid approach to the assessment and understanding of workplace behaviour.

Journal of Occupational and Organizational Psychology, 74, 623-635. 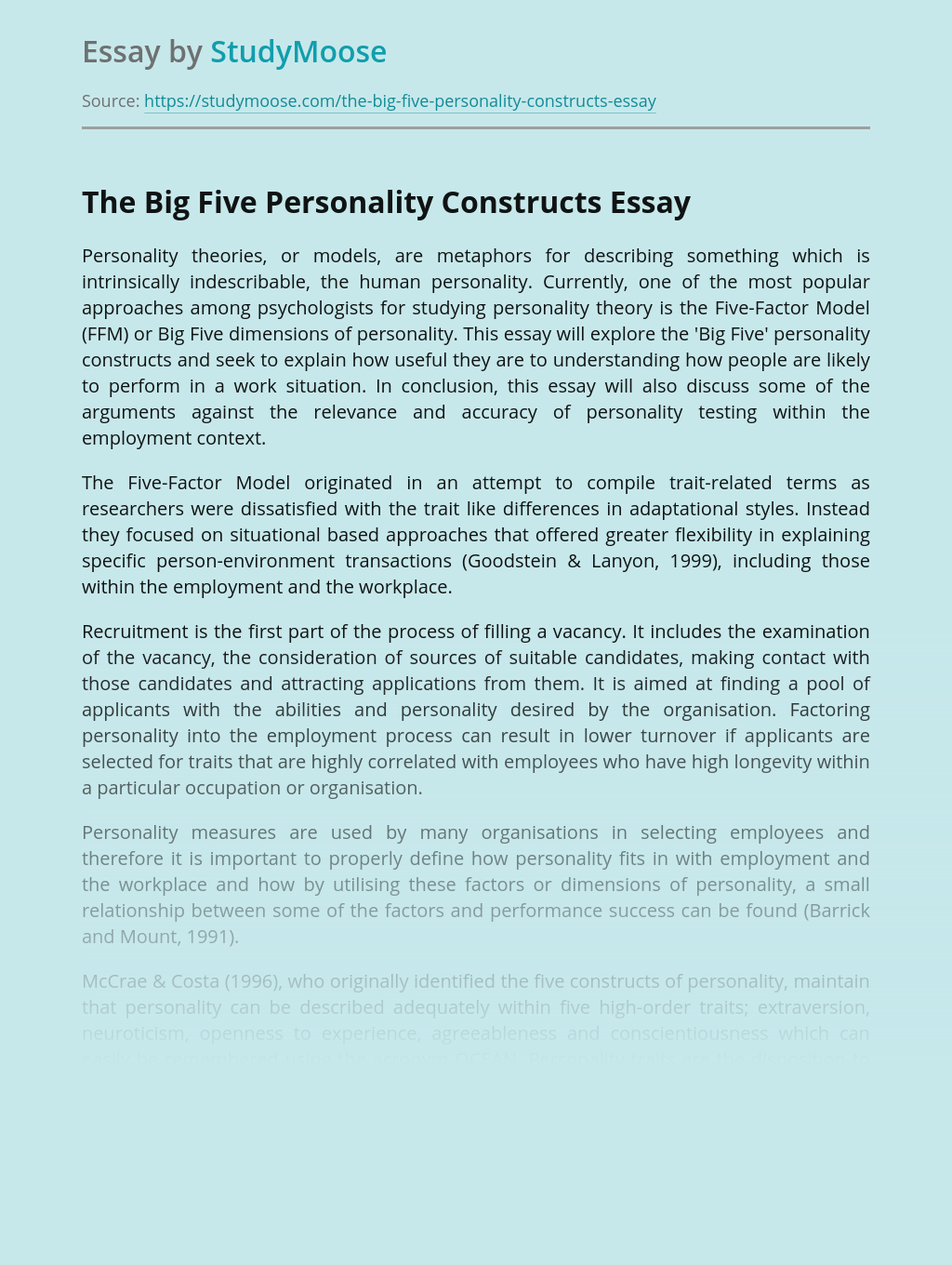 Turn in your highest-quality paper
Get a qualified writer to help you with
“ The Big Five Personality Constructs ”
Get high-quality paper
Helping students since 2015
Stay Safe, Stay Original