What do you think bill and melinda gate’s personality traits are under each of the big five personality dimensions?

The “big five” are broad categories of personality traits. While there is a significant body of literature supporting this five-factor model of personality, researchers don’t always agree on the exact labels for each dimension. However, these five categories are usually described as follows: Extraversion: This trait includes characteristics such as excitability, sociability, talkativeness, assertiveness and high amounts of emotional expressiveness.

Agreeableness: This personality dimension includes attributes such as trust, altruism, kindness, affection, and other prosocial behaviors.

Conscientiousness: Common features of this dimension include high levels of thoughtfulness, with good impulse control and goal-directed behaviors.

Don't use plagiarized sources. Get your custom essay on
“ What do you think bill and melinda gate’s personality traits are under each of the big five personality dimensions? ”
Get custom paper
NEW! smart matching with writer

Those high in conscientiousness tend to be organized and mindful of details.

Openness: This trait features characteristics such as imagination and insight, and those high in this trait also tend to have a broad range of interests. It is important to note that each of the five personality factors represents a range between two extremes.

For example, extraversion represents a continuum between extreme extraversion and extreme introversion. In the real world, most people lie somewhere in between the two polar ends of each dimension.

McCrae and his colleagues have also found that the big five traits are also remarkably universal. One study that looked at people from more than 50 different cultures found that the five dimensions could be accurately used to describe personality.

Based on this research, many psychologists now believe that the five
personality dimensions are not only universal; they also have biological origins.

Always remember that behavior involves an interaction between a person’s underlying personality and situational variables. The situation that a person finds himself or herself in plays a major role in how the person reacts. However, in most cases, people offer responses that are consistent with their underlying personality traits.

These dimensions represent broad areas of personality. Research has demonstrated that these groupings of characteristics tend to occur together in many people. For example, individuals who are sociable tend to be talkative. However, these traits do not always occur together. Personality is a complex and varied and each person may display behaviors across several of these dimensions.

What do you think bill and melinda gate’s personality traits are under each of the big five personality dimensions?. (2016, May 11). Retrieved from https://studymoose.com/what-do-you-think-bill-and-melinda-gates-personality-traits-are-under-each-of-the-big-five-personality-dimensions-essay 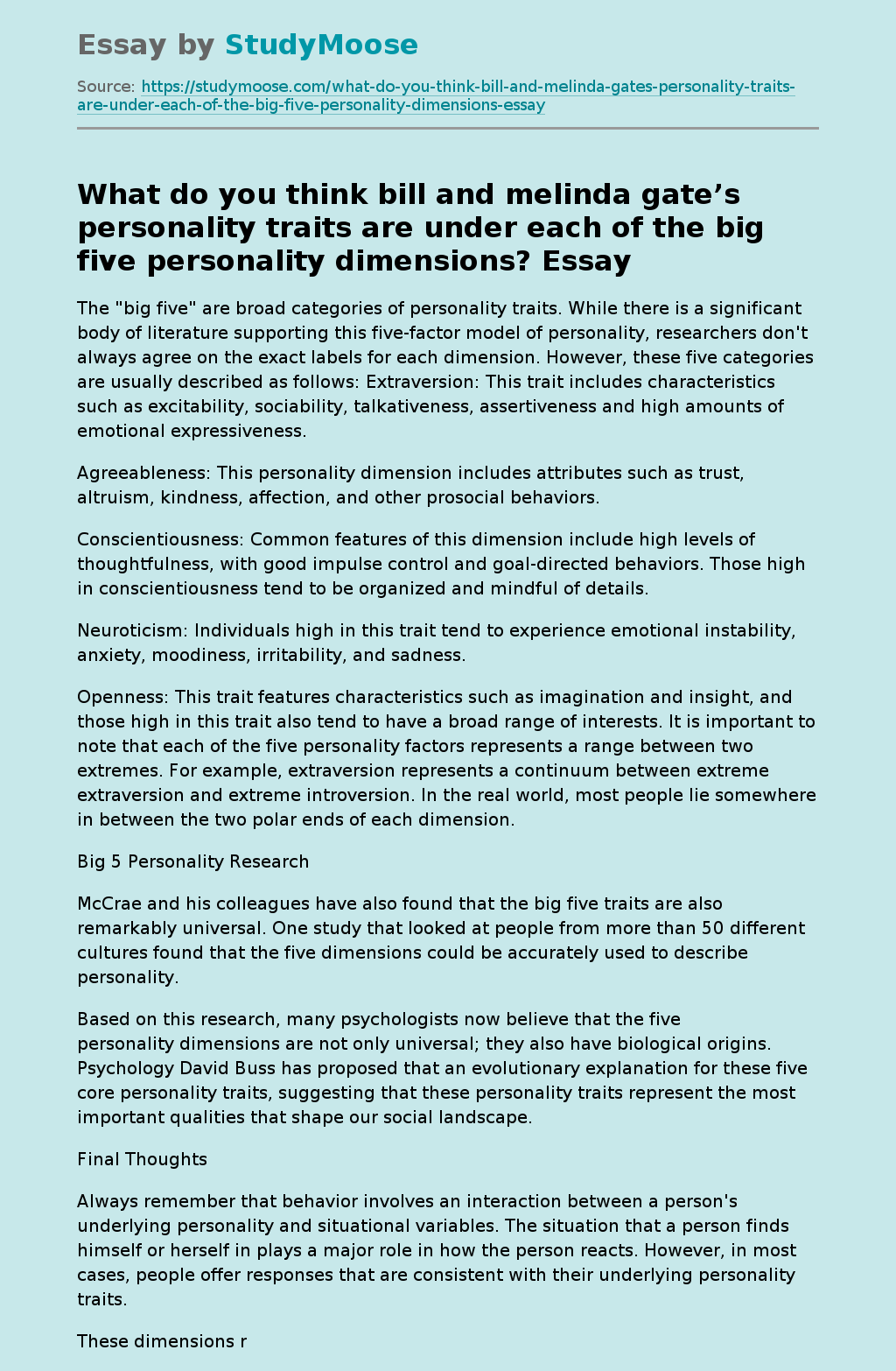