Bill Gates was born on Oct. 28, 1955. He grew up in Seattle with his two sisters. Their father, William H. Gates II, is a Seattle attorney. Their late mother, Mary Gates, was a schoolteacher, University of Washington regent, and chairwoman of United Way International. Gates attended public elementary school and the private Lakeside School. There, he discovered his interest in software and began programming computers at age 13. In 1973, Gates entered Harvard University as a freshman, where he lived down the hall from Steve Ballmer, now Microsoft’s chief executive officer.

Don't use plagiarized sources. Get your custom essay on
“ Contributions of Bill Gates ”
Get custom paper
NEW! smart matching with writer

In 1974, Bill was attending Harvard University when Allen spotted an advertisement for a $350 assemble-at-home computer called the Altair 8800, manufactured by MITS, a company headquartered in Albuquerque, New Mexico. Bill and Allen worked nonstop for six weeks to devise a simple version of BASIC, a programming language, for the Altair. They demonstrated their finished product to the company’s engineers with great success, and the following year, Bill and Allen founded Microsoft Corporation.

Microsoft had entered the personal computer (PC) industry at an opportune time.

In 1980 Microsoft won a contract with IBM to operate personal computers using Microsoft’s system, commonly known as MS-DOS. By 1983 the IBM PC had become the industry standard and MS-DOS was its operating system. In 1995, Microsoft introduced Windows 95 which again revolutionized the PC market, and became an industry standard (Master of Business, 2010). Bill Gates has accomplished so much beginning at age 13, starting with the creation of Traf-o-Data, then starting Microsoft, on to writing books, and finally becoming one of the richest and most giving philanthropist in the world.

In 1970, Bill Gates and Paul Allen had been involved in some impressive software projects by then, most recently at TRW working on software to control the Northwest power grid. Traf-O-Data was a little different. Traf-O-Data was a computerized machine for processing paper tapes from traffic counters, those black hoses most of us have driven over on roads throughout the United States. It was an early example of a microprocessor-controlled “embedded system,” not really a computer as we know it, but computerized. It began with the idea of automating the processing of traffic tapes for the local road department, which a group of students at Gates’s and Allen’s Lakeside School was doing by hand at the time and it would also require special hardware. Neither of the two had much hardware experience, so they enlisted the help of a friend, Paul Gilbert, to construct the machine while they wrote the software.

The plan was to manufacture the Traf-O-Data and sell it to state and local governments, but their one demo was a failure. The tape reader malfunctioned and the sale was lost. They repaired and debugged the machine, but it never became a product—which was fortunate. Success would have distracted Gates and Allen at a crucial moment. As it was, by the time the lone Traf-O-Data began processing traffic tapes in 1975, the two had turned the operation over to Gilbert and moved on to form Microsoft (Startup — Albuquerque and the Personal Computer Revolution, 2006). Gates eventually sold this system to the city for $20,000 when he was only fifteen years old (Master of Business, 2010).

Microsoft is founded by Bill Gates and Paul Allen in 1975. With annual revenues of more than $32 billion, Microsoft Corporation is more than the largest software company in the world. The company’s core business is based on developing, manufacturing, and licensing software products, including operating systems, server applications, business and consumer applications, and software development tools, as well as Internet software, technologies, and services. Led by Bill Gates, Microsoft has succeeded in placing at least one of its products on virtually every personal computer in the world, setting industry standards and defining markets in the process.

Microsoft’s big break came in 1980 as IBM began developing its Personal Computer, or PC. While IBM contracted Microsoft to develop languages for the PC, IBM’s first choice to provide an operating system was the leader in the field, Digital Research. However, IBM and Digital Research were unable to agree on terms, so the contract for the operating system was awarded to Microsoft. As Microsoft was under a tight deadline and did not have an operating system of its own, the company purchased the rights to one from Seattle Computer Products for $75,000. The year 1980 also saw the arrival of Steve Ballmer, a close friend of Gates from Harvard, who was hired to organize the non-technical side of the business. Ballmer later recalled the company’s stormy beginnings under Gates’s leadership: “Our first major row came when I insisted it was time to hire 17 people. He claimed I was trying to bankrupt him.” Conservative in his spending, Gates dictated that the company must always have enough money in the bank to operate for a year with no revenues.

In 1998, the U.S. Department of Justice and a group of 20 state attorneys general filed two antitrust cases against Microsoft alleging violations of the Sherman Act. While the antitrust suit against Microsoft showed threats of a forced breakup of Microsoft, innovations in the company continued. In 2000, Microsoft invested $135 million in the software publisher Corel. Apparently, Corel negotiated the investment, offering to drop “certain legal actions” it had against the company, even as it had no legal claims filed against Microsoft. The Department of Justice ruled that they would not enforce a breakup of Microsoft. By the end of 2002, the U.S. District Court approved the settlement Microsoft reached with the Justice Department. The settlement included preventing Microsoft from benefiting from exclusive deals that could hinder competition; uniform contract terms for computer manufacturers; the required ability of customers to remove icons from certain Microsoft features; and a requirement that Microsoft release specific innovational technical information to its rivals, in order to enforce competition.

By 2004, with more than 56,000 employees and anticipated year-end revenues of up to $38 billion, Microsoft continued to hold a strong lead in the computer software industry. (Funding Universe, 2004). Microsoft’s revenues this year will be around $36 billion, or $100 million a day (Overview of Microsoft Today, 2010). While at Microsoft, Gates started to write a series of books. His first book was published in 1995, The Road Ahead. The book was at the top of the “New York Times” bestseller list for seven weeks. In the edition of The Road Ahead, Microsoft Chairman and CEO Bill Gates laid out his vision of an interconnected world built around the Internet. Based on the premise that life will be transformed by the convergence of inexpensive computing and inexpensive communications, Gates drew from his experience at the center of the personal computer revolution to give insights on the growth, evolution and impact of technology. (Microsoft, 2010).

In 1999, Gates wrote “Business: the Speed of Thought”, a book that shows how computer technology can solve business problems in fundamentally new ways. The book was published in 25 languages and is available in more than 60 countries. “Business: the Speed of Thought” has received wide critical acclaim, and was listed on the best-seller lists of the “New York Times”, “USA Today”, “The Wall Street Journal” and on Amazon.com. Gates has donated the proceeds of both books to non-profit organizations that support the use of technology in education and skills development (Microsoft, 2010). Gates has written so many other great books that have been translated into Spanish, German and other languages.

Bill Gates has accumulated a huge personal fortune over the years. In 2005, Gates committed himself to donating $750 million to the Global Alliance for Vaccines and Immunisation charity. The Gates foundation, which (at the time) is worth $30 billion, is now the largest charity to have been created by a single benefactor or private company, following a previous $3 billion gift from its founder last July. Mr Gates has stated that he intends to give away 90 per cent of his fortune, which is currently valued at about $50 billion (Bill Gates, Saviour of the World?, 2005). As of December 31, 2009, the total grant commitments since inception has came up to, $22.61 billion. The Gates foundation has given to several charities and organizations around the world (Foundation Fact Sheet, 2010). 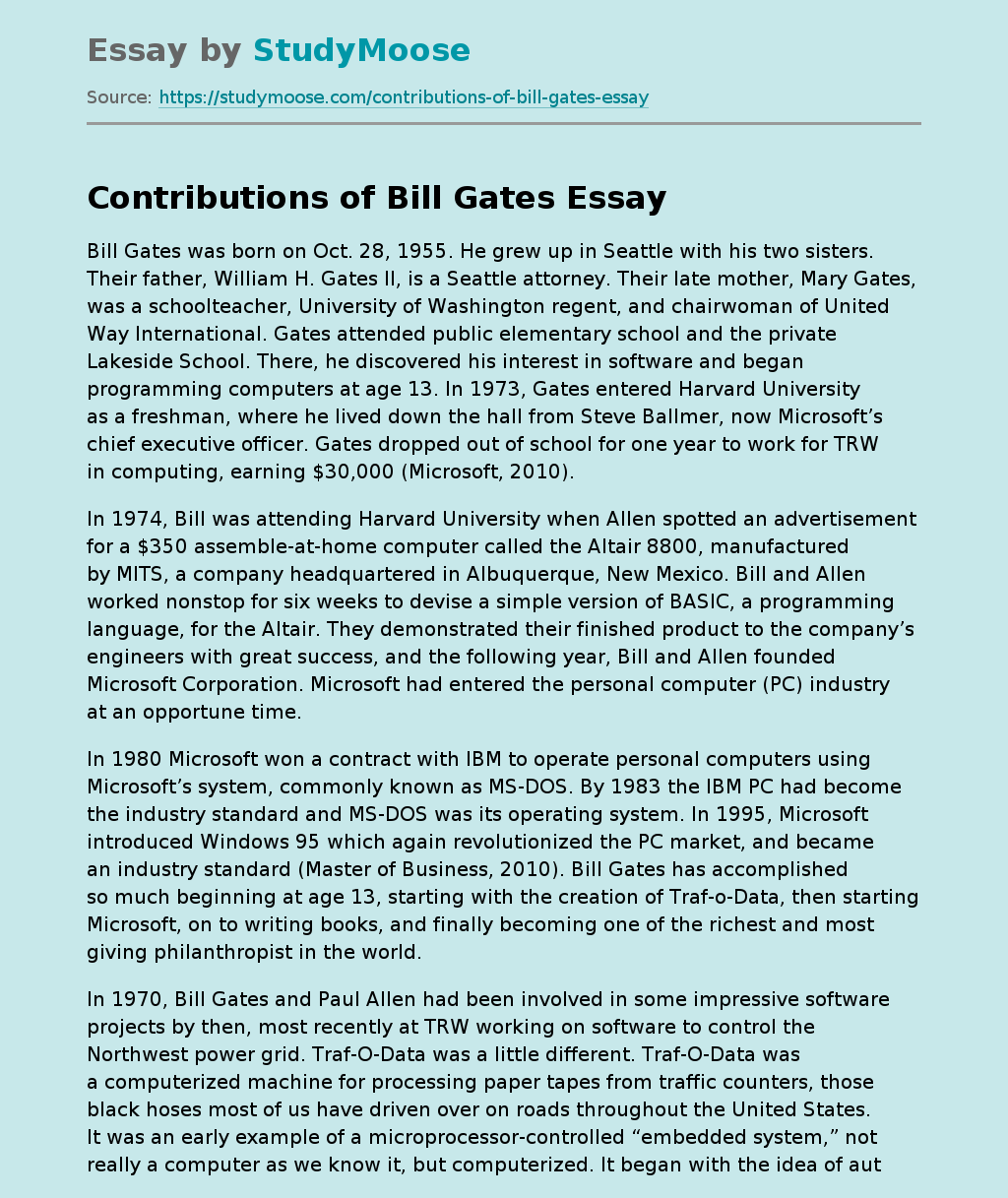