Everyone has their own favorite personality and so do I. My favorite personality or is often called idol is William Henry Bill Gates III. He is usually known as Bill Gates. He was born on October 28, 1955 and was a local resident of Seattle, Washington, United States. In his early ages, he began to show an interest in computer programming. Gates excelled in Mathematics and Science. Because of his excellence, he enrolled in Lakeside, an exclusive preparatory school.

Most of his professions involves the computer software.

He holds the position of Technology Advisor of Microsoft Corporation. Besides, he is the Co-Chair of Bill and Melinda Gates Foundation, an organization which is named after him and his sister. They were born into a family with a rich history of business, politics and community service as their father was a successful lawyer. He is the CEO of Cascade Investment and holds the highest position as the Chairman of Corbis. He and his partner, Paul Allen built the world’s largest software business.

Due to his excellence software invention and his contribution to the world, Gates has received many big awards and achievements. He was listed as the 400 richest people in America Issue and one of the 100 most influential people in the twentieth century. He was named CEO of the year by Chief Executive Officers magazine in 1994. He has proved his profoundness and was ranked number one in the Top 50 Cyber Elite in 1998. He was the fourth most powerful person in the world in 2012. Apart from that, Queen Elizabeth II has made Gates an Honorary Knight Commander of The Order of The British Empire in 2005.

He and his wife were awarded The Order of The Extec Eagle for their philanthropic works around the world in the areas of health and education.

Gates have shown to have many positive qualities. Although he was born rich naturally, he still has a strong desire to achieve his dreams on his own effort. Due to his determination, he has been famous and became the world’s idol. Unlike me, I was born much poorer than him. Of course, I am determine to change my family life by fulfilling my dream of becoming an entrepreneur. Gates has been yearning so much for knowledge and so, he traveled from countries to countries to receive the honorary doctorates from universities around the world such as in Netherlands, Sweden, Japan, China and Stockholm.

I admire Bill Gates very much. He can be the inspiration for me to be more determined to achieve my dream as he is the person who always shows an improvement from time to time. For example, he has been the fourth most powerful person in the world up from fifth in 2011. He completed the computer research on his own until he can see the success of his research and this proves him to be an independent and hardworking person. 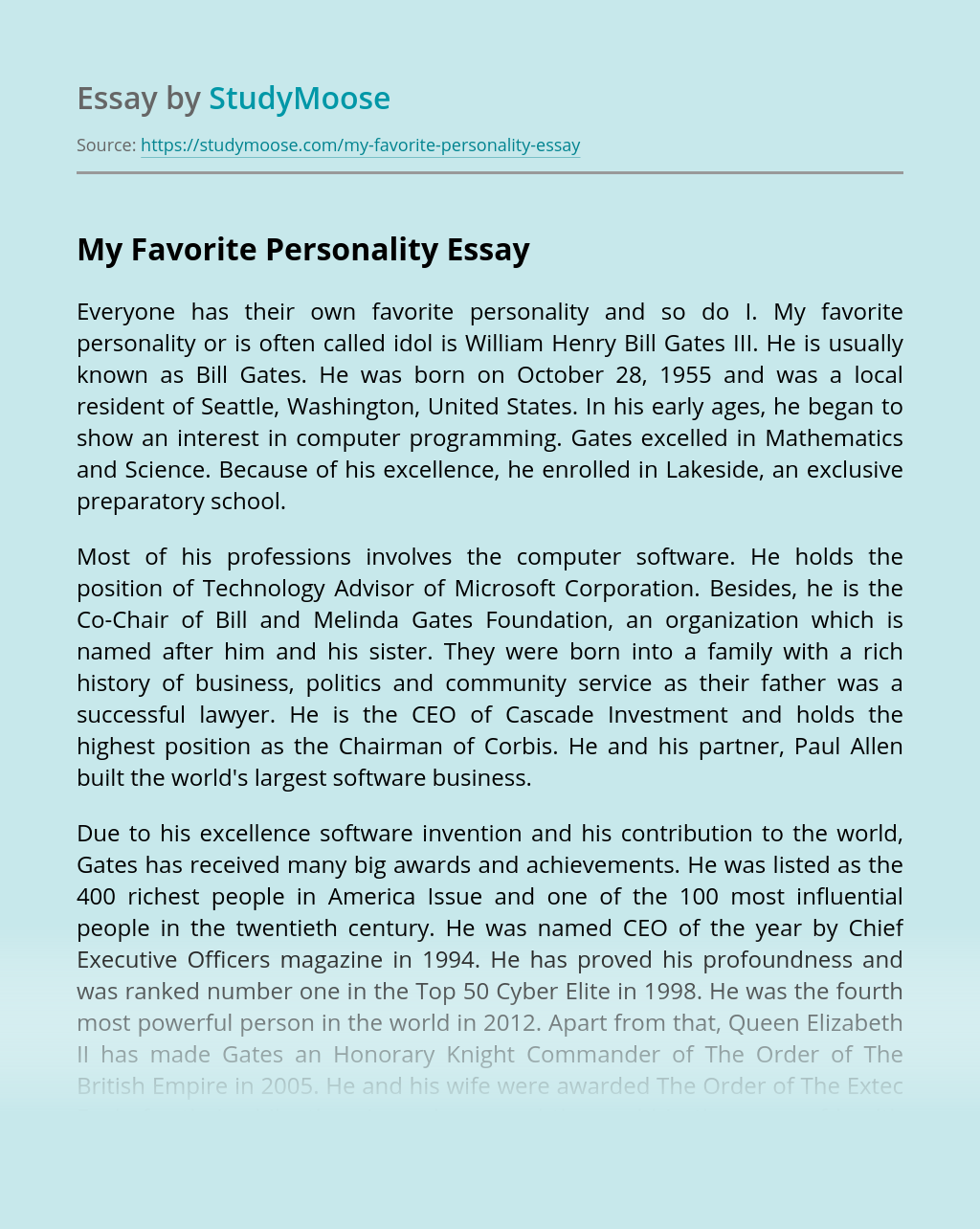 Don’t waste time
Get a verified expert to help you with My Favorite Personality
Hire verified expert
$35.80 for a 2-page paper
Stay Safe, Stay Original